Confessions of a Compulsive Paparazzo

Letter to the Poet at the End of Time

The eternal return
After W.S. Merwin

In Time
for Hanna

Sowing in a Pandemic Time

Why We Light the Candle
for Irene McKinney 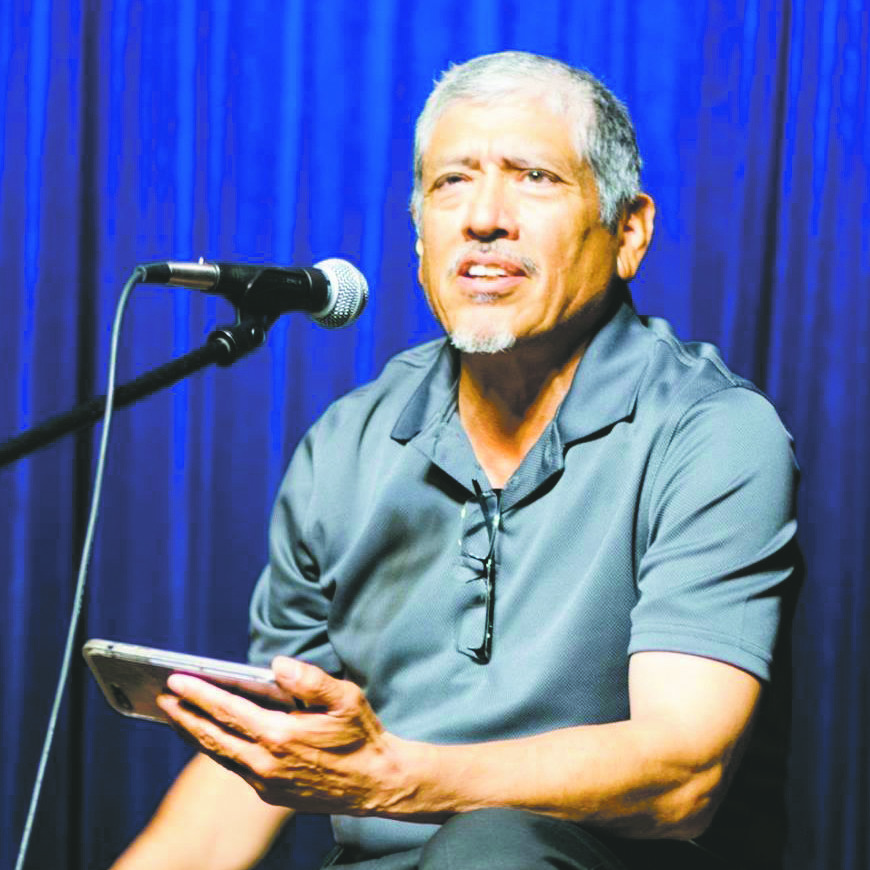 Frosted windows, Christmas carols and children all nestled snug in their beds while visions of sugarplums danced in their heads — but me, I never celebrated Christmas as a child. I’m not sure I really celebrate it now. I have no colorful tree or neatly wrapped gifts nestled beneath green boughs. However, I am keenly aware of its significance, cordial on the subject and enamored with a season that centers on giving yet confused over the controversy it seems to generate between those who lay sole claim to its meaning and those, like me, who meld it into something of their own choosing. But there was a time when it didn’t matter at all.

Then migrant life brought me to Michigan, and I entered school. Besides learning my ABCs and tying my tattered shoes, I was introduced to Christmas and the gift-giving Santa. The introduction was more of an immersion into a world of school holidays, but the holiday that stood out the most was Christmas.

I asked Mother about Christmas. She replied in a very kind voice, “We don’t celebrate holidays,” but I think it was more because she couldn’t spend what she didn’t have. Dad, on the other hand, didn’t have anything to say on the subject. “It no matta,” he would say, so I can only speculate that his childhood as a Mexican peon didn’t offer up holiday luxuries either.

Most children are introduced to Santa shortly after their birth. In my case, I was born into migrant life  — Santaless. A childhood haunted by the cage of poverty; accommodations that offered infrequent meals and inadequate clothing.

I was 5 when Dad made the decision to take us out of the fields and put us in school. He chose to stay in Michigan, with its snow drifts and howling winds. We landed in a cold hovel, very different from the warm migrant shack back in Texas, the new shelter more than a shed but less than a house. The walls were insulated with mannerless roaches that made intrusion a way of life. Most of the windows were covered in thick plastic, and in winter they accentuated its gloom. A small, fuel-oil furnace in the living room, water from the neighbor and an outhouse in the back — that’s what passed for Michigan low-income housing in 1957.

School, on the other hand, turned out to be great. There were warm rooms, running water and indoor toilets, which offered up a reassuring whirl and whoosh, guaranteeing my business would be out of sight.

In December, when the snow flies, I’m visited by a Christmas ghost, and I’m a child in school again. The hallways are noisy with pictures of snowmen, Santa and Christmas trees. It’s the year I learn how to make a Christmas tree from a rolled-up newspaper. It’s a cheerful time, with the sugary smell of Christmas cookies, colorful cards and red stockings hung out with care, as if Old Saint Nick would soon be there. Christmas, I like listening to the stories: singable songs, tales of shining stars and Christmas wishes. But outside of school, Christmas in Michigan means this little boy’s feet will be cold and wet. The worn-out, hand-me-down shoes have holes in them. It’s the kind of memory that is scribed with a sharp quill dabbed in indelible ink, leaving permanent, snowy footprints for me to follow when I relive the memory.

I dread the winter break that separates me from my school — my haven. I lament any unavoidable walks in the snow, but I have a plan. On Christmas Eve, I will wait until everyone is asleep, take my Christmas tree made of print and place it in the only window barren of plastic for Santa to see. It doesn’t shimmer or shine like all the other trees, but it shouldn’t matter: It’s Christmas.

When the moment finally arrives, I set my tree on the sill and stare out the window. The moon captures me in its light. My hopeful eyes are fixed on the heavens. I see a magic sky the color of a blackbird’s wing, a dark blanket tinged in blue, speckled with shiny beams of light, each beckoning a wish.

My gaze finally lands on what seems to be the brightest star in heaven. My Christmas star. It glimmers with approval. I close my eyes and wish hard upon the star. “Shoes,” I speak softly to myself. A pair of shoes to keep my feet warm and dry.

That’s what I love about children: even in the worst of times, they cling to hope. It’s Christmas Eve, and not a creature is stirring, not even the roaches. With the magic of Christmas and a wishing star, surely Santa will find his way here.

I wake the next morning. My feet hit the cold floor, and I run to the window, but nothing rests under my newspaper tree. Had my ritual gone wrong? I believed with all my heart. Maybe Santa didn’t like my tree of shredded headlines from The Daily Telegraph.

With no answer in sight, it remained my secret. I asked the star for a pair of shoes, because I would never ask my parents for something they already knew I needed. The disappointment thundered down like an avalanche, crushing my Christmas spirit. Feeling betrayed by Santa, I set him aside. The holiday now became an occasion for the well-to-do. I took the impending cruelty of future seasons personally.

Then, one Christmas morning in another time and another house, I step onto the porch and am greeted by a very large box. It’s filled with gifts. The presents are from Santa to us, but the box belongs to someone else. I don’t recall whose symbol of kindness was on the box, but I do remember how the porch came alive with voices.

“A doll,” shrieked one of my sisters. “A cowboy hat and guns!” shouted one of my brothers, but what really caught my eye is what leaned against the box: an orange, 24-inch, two-wheel bicycle with my name on it.

All those years ago, it wasn’t my shabby, little tree or a wish that fell on deaf ears that kept Santa away. It was one of his helpers who must’ve been asleep on the job. With so many needy children in the world, Santa looks for helpers to pitch in. He whispers in their ear and tugs at their heart, relying on them to do their part to lighten his load. The helper, imbued with particular grace, is the kind of person who gives to those who cannot, or to those who may never return the kindness.

I’m still not sure if I celebrate Christmas, or even if I’m imbued with particular grace, but when Santa whispers in my ear and tugs at my heart, I remember the little boy at the window, and I too do my part — a blanket here, a coat there or maybe even a pair of shoes to a child in need.

That day, when I was greeted with an act of kindness, Santa’s helpers restored faith and goodwill to a young boy’s heart. Santa made up for the earlier oversight in spades when he delivered, not with a pair of shoes that would be outgrown, but with a gift that would wheel me to freedom from the confines of a poor kid’s world.

Yes, the shoes were important for getting around on foot, but a bike: it was my wings. Now I could soar from my cage toward any adventure that awaited.

Cruz Villarreal is a published local poet with a creative writing degree from Lansing Community College.

<<< Meet the writers behind this year's Poetry and Lights edition