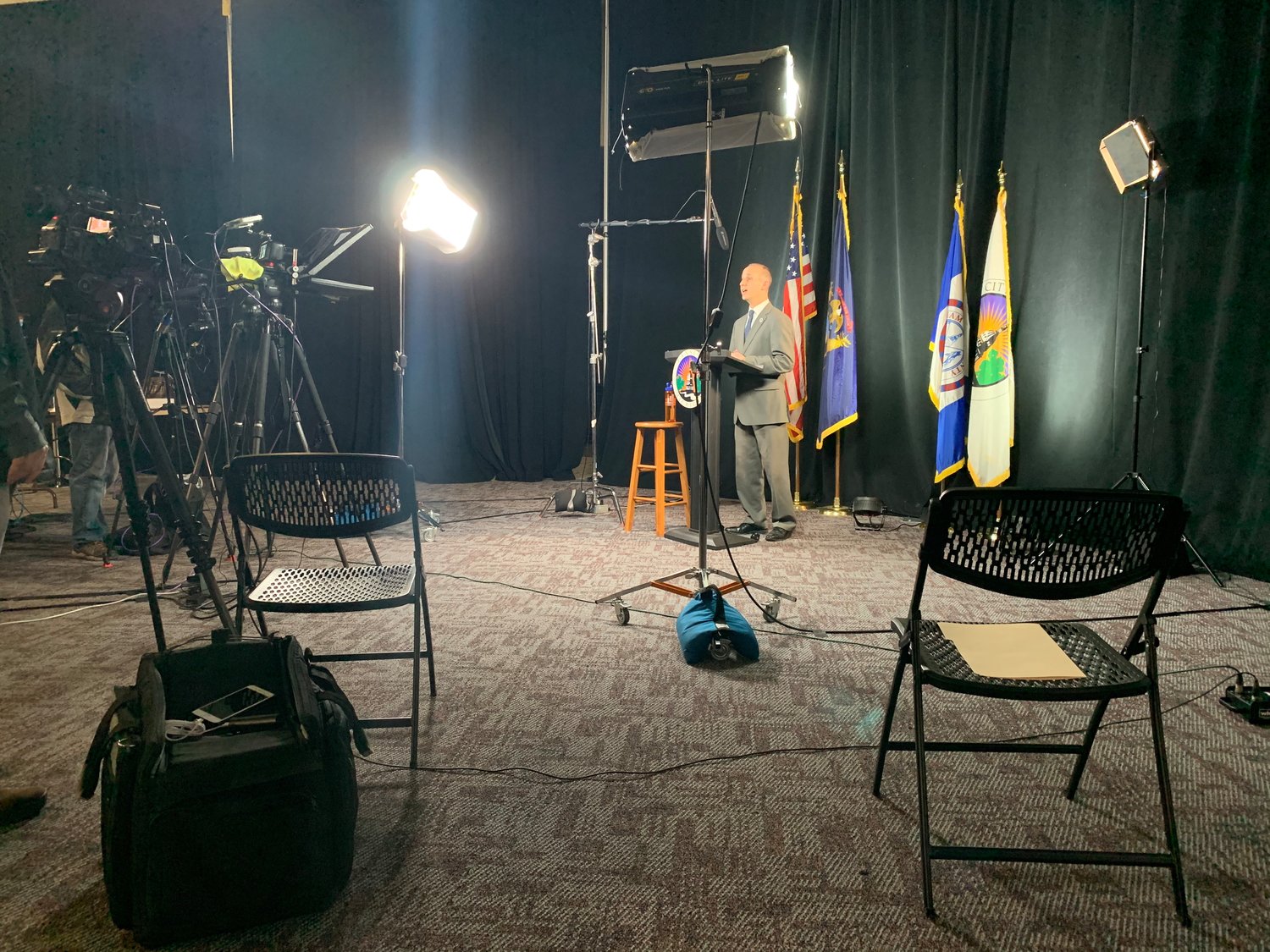 THURSDAY, Feb. 4 — Lansing Mayor Andy Schor’s fourth annual State of the City address appeared far from business as usual last night. His prepared remarks were delivered remotely. Only a handful of news reporters and video technicians were there to watch it live amid state pandemic precautions.

Upbeat hip-hop music that preceded last year’s State of the City remarks was replaced this year with a melodic composition from the Lansing Symphony Orchestra. No audience was there for applause as Schor quietly approached or left the podium. Guests were asked to leave shortly after the speech ended.

That’s all to be expected while COVID-19 cases continue to spread locally and statewide epidemic orders remain in place. But some suggested the content of his Schor’s remarks were also socially distanced.

While Schor’s speech focused mainly on continued efforts to battle against the coronavirus and to dismantle systemic racism in the city of Lansing, his would-be political challengers walked away from the short address — which lasted for a total of only about 30 minutes — uninspired and desiring more.

That criticism was obviously at its fiercest among those who desired last night’s State of the City address to be Schor’s last — including former three-term Mayor Virg Bernero and Councilwoman Patricia Spitzley. Both say they plan to challenge Schor in the primary election if and when Schor decides to run for a second term.

None of them have filed ahead of the April 27 deadline.

“I heard him talk about some of the stuff he has done from an equity standpoint. I heard him talk about the pandemic. It did lack a lot of substance, but that’s to be expected with these types of speeches,” Spitzley told City Pulse this morning. “Still, that can be a little frustrating. I think residents expected more.”

“As in past speeches, he takes undeserved credit for economic development projects that actually began during the Bernero administration, including all of the downtown and Michigan Avenue housing projects he cited in his speech,” Bernero said in a statement on Facebook last night about Schor’s speech.

Here are a few of the highlights — and criticisms — of the 2021 State of the City address:

Much of Schor’s remarks focused on his administration’s efforts to keep vital city services — like pothole repairs and park improvements — moving amid the pandemic while also protecting staff and residents. He thanked his staff and community partners like the Ingham County Health Department for their work.

“My focus now is on mass vaccinations and ensuring that everyone can get the vaccine,” Schor said, also urging federal officials to pass a comprehensive plan that provides stimulus funds for cities like Lansing.

Absent from those vaccination remarks were any mention of Schor’s recent inoculation, which he received outside of current priority guidelines ahead of thousands of older, at-risk residents in the city. Bernero said Schor should’ve apologized and stopped the “deception” over his recent shot.

“He missed the opportunity to apologize for cutting the line to get his COVID-19 vaccination, putting his personal interests ahead of frontline essential workers and senior citizens and misled people about how and why he got the shot,” Bernero said. “Not only did he fail to apologize, he omitted the fact entirely.”

Schor instead highlighted economic development and financial support that has been offered to small businesses in the wake of the pandemic — including “hundreds” of new housing units opened in 2020, the completion of a downtown grocery store and a hotel that will open on the same block this month.

The mayor also “worked with” the Lansing Economic Area Partnership and the Lansing Chamber of Commerce to provide more than $6.5 million in grants and loans to businesses in the region, including more than $2.5 million awarded in Lansing, and to create a guidebook for local entrepreneurs, he said.

“He didn’t say a word about the city’s looming financial disaster or the downgraded credit rating from Stand and Poors, or the fact that the city’s reserve funds are almost gone,” Bernero added.

Hours before Schor took the virtual stage, the Lansing State Journal was the first to report that Standard & Poors downgraded two of Lansing’s bond ratings, citing concerns over dwindling reserve levels. The change from AA- to A+ and from AA to AA- could make it more expensive for Lansing to borrow cash, which would in turn affect the city’s ability to move forward with capital projects and road maintenance.

“For me, it’s the budget all day every day. It’s about finances,” Spitzley remarked today. “Our people need to know that we have the money to provide them basic services, and we could’ve used more on that.”

COVID-19 was “just one of the critical challenges” that Lansing faced last year, Schor explained.

“Last summer, bias and racial injustice became front and center with the horrific killing of George Floyd by police in Minneapolis. This launched a renewed and important push for racial justice and equity,” he said in his speech. “We must face the harsh reality of inequality and injustice for Black and brown members of our communities. These conversations can be uncomfortable and difficult, but they are necessary.”

Schor touted a wide array of reforms at the Police Department over the last year, including ending the practice of “no-knock” warrants and banning cops from stopping drivers for minor traffic offenses.

Police Chief Daryl Green has said that defective equipment violations disproportionately impact people of color in Lansing, accounting for about 15% of all traffic stops last year. In nearly 28,000 traffic stops over the last three years, 33% of drivers were Black despite making up only about 22% of the city’s population.

Statistics also show that once those Black drivers and passengers were stopped, they were about three times more likely to have been searched by police than white people who were pulled over in Lansing. Schor said the changes help ensure that “people are treated with the same level of respect and dignity.”

Consultant Teresa Bingman told the Lansing State Journal that a report from the alliance would be available in January. That never materialized. A spokeswoman from Schor’s office promised last week that more details would come at last night’s speech. Schor only said an “update” would come this month.

“If you say you’re going to do something, you have to do it,” Spitzley remarked today.

Included in Schor’s speech were a few other announcements about his agenda in 2021:

Lansing’s Office of Financial Empowerment created a new section on the city’s website this week called “Managing Your Finances During COVID-19,” which features weekly live webinars and also compiles financial tips, resources and information on basic needs like food, shelter, transportation and utilities.

The city’s Department of Treasury will also begin accepting e-file for individual income tax returns this spring, giving residents an easier way to file taxes while reducing the need to print and waste paper. Schor said the city is also in the process of shifting to a “brand new, modern” website in 2021 which will make it easier for residents to navigate and find what services or contact information they might need.

Lansing will also launch “One Call to City Hall” this year, Schor said. The idea is to launch an “answering center” staffed by real people who will be equipped to handle “almost any problem, question or complaint.” Residents will only need to dial 311 to be connected to the new program later this year.

“This will be a one-stop shop for questions regarding any non-emergency,” Schor explained.

Schor also announced the creation of the “Lansing CARES” program, which will use about $1.5 million in federal grant funding to offer forgivable, interest-free loans to struggling businesses in Lansing. About $600,000 will be offered through loans of between $5,000 and $50,000 “as quickly as possible,” he said.

Michigan Women Forward is also working with the city to provide $100,000 in emergency financial assistance and disaster planning training to “microenterprises” — businesses with five or fewer employees — that are in danger of going under during the pandemic. Another $780,000 will be allocated to help with rent and mortgage payments for up to three months to eligible Lansing residents, he said.

Schor declined to comment when asked about the upcoming election last night.

“I’m focused on running the city, not Virg Bernero,” he told reporters in a virtual post-speech scrum.