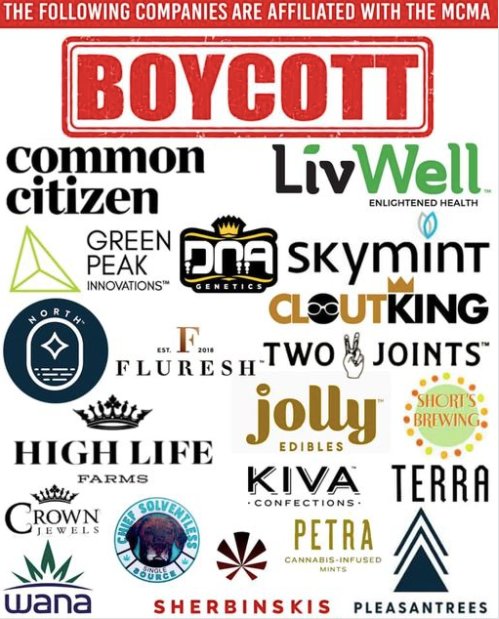 FRIDAY, May 28 — A trade group that represents some of the largest cannabis companies in Michigan is lobbying for more regulations for medical marijuana caregivers, pushing some activists to boycott several popular pot brands — including Skymint, Pleasantrees and High Life Farms in Greater Lansing.

And if the proposed restrictions come to fruition, some activists think they could throw a wrench into longtime patient-caregiver relationships statewide, reducing the number of marijuana plants that caregivers can grow and the number of patients they can serve. Some also suggested the changes could toss the whole medical marijuana program into jeopardy, ultimately steering up to 72,000 medical marijuana patients away from their caregivers and into licensed pot shops.

The Michigan Cannabis Manufacturers Association, the trade group leading the crackdown efforts, formed in 2019 to “operate exclusively for the promotion of the cannabis manufacturers by promoting the common business interests and general welfare of the industry,” according to articles of incorporation filed with state records.

Its executive director, Steve Linder, is a longtime lobbyist in state politics and a Republican activist with a history of advocating for more stringent cannabis regulations. Among its board of directors are executives with High Life Farms, Skymint, LivWell and Common Citizen, which Linder has described as the “General Motors, Fords and Chryslers” of the weed business.

Until he resigned last week, Pleasantrees CEO and founder Randy Buchman was its president. Neither Linder, Buchman nor executives from any of the association’s members returned calls to City Pulse. The group reportedly represents more than a dozen companies, but only a handful have been identified, namely because their executives are listed as directors in state records.

The recent controversy kicked off last week when an interview with Linder was published in the cannabis industry newsletter “Grown In” in which he advocated for tighter industry regulations.

“The first law I would want to pass is a law that would start to get at the non-licensed supply out in the marketplace,” Linder explained, labeling medical caregivers as part of the “gray market.” “It’s not tested. We don’t know where it’s grown. We don’t know who’s growing it. People are not employing, they’re not investing in infrastructure, they’re not paying taxes. So, we have to get at the unregulated supply and that law needs to be passed. And we’re going to lead the charge.”

Multiple state lawmakers told City Pulse this week that Linder has been shopping legislative amendments for months that aim to reel back existing plant and patient allowances for medical marijuana caregivers and also require that their products be tested at a licensed laboratory.

State law allows licensed caregivers to cultivate up to 12 marijuana plants or purchase up to 2.5 ounces of product for up to five different patients — enabling a harvest of up to 72 plants if the caregiver is also registered as a medical marijuana patient. Unlike retailers, caregivers are not required to submit any lengthy business plans to state officials or pay nearly as much in licensing fees. Their products also don’t have to be tested at a safety compliance laboratory.

State records showed there are about 30,000 caregivers servicing more than 250,000 patients outside of the nearly $1 billion licensed retail market in Michigan, including more than 1,200 caregivers and 8,600 patients across Greater Lansing in Ingham, Eaton and Clinton counties. State officials said about 72,000 patients statewide are connected to a licensed caregiver.

Linder’s proposal would reportedly steer caregivers into a similar regulatory structure required of licensed retailers, pushed as a way to bolster patient safety with new mandates that caregiver harvests also be tested for pesticides, heavy metals and other potentially harmful additives.

Some also speculated that his plans could include more limitations for personal home grows.

In a recent episode of the industry-focused “Medical Mondays Podcast,” Buchman suggested that changes to caregiver regulations would also help to cut back on black market sales that have continued unchecked by local law enforcement under the guise of medical treatment.

And though Buchman resigned from the the trade group, he still voiced a desire for legislative change.

“I don’t care if you’re growing weed in your basement or your pole barn or whatever and you’re doing it for yourself and your patients,” Buchman said. “It’s the guy who is blowing out 100, 200 or 300 lights. That guy is not playing in your field or my field. He calls himself a caregiver.”

Although state law dictates that caregivers only provide a limited amount of weed for a limited number of patients, Buchman and Pleasantrees’ chief legal officer, Ben Sobczak, argued that some caregivers have essentially gamed the system, turning a patient-focused model into a commercial enterprise while local law enforcement and state regulators turn a blind eye.

“Nobody should be forced to buy weed from licensed operators. Nobody here has ever said we want to see people get raided and go to jail. But that doesn’t mean it can be a free-for-all,” Sobczak said. “If you want to make millions and millions of dollars moving duffle bags, you should get a license. They aren’t doing that for patient access. They’re doing it for money.”

This reporter was able to locate at least three unlicensed companies in Greater Lansing advertising unlicensed pot products this week. Most identified themselves as medical marijuana providers. Items were also listed at significantly lower costs than local retail averages.

This reporter also bought weed from and wrote about an unlicensed dispensary on the city’s northside last year. Despite the news coverage, it still appeared fully operational this week.

A spokesman for the Lansing Police Department said local cops will still investigate complaints of unlicensed pot shops but since Dec. 1, 2018, the Ingham County Prosecutor’s Office has only issued seven charges involving illicit marijuana sales. Four involved companion charges, like possession of cocaine or assault on a police officer. Another involved a whopping 32 pounds of pot that police and prosecutors suspected were set to hit the black market in Greater Lansing.

Many pot activists, however, would prefer to keep the status quo and have argued that there is very little evidence to suggest that untested caregiver-grown marijuana creates any sort of public health risk. Rick Thompson, owner of the Michigan Cannabis Business Development Group, labeled any changes as “unnecessary” and has promoted the recent boycott online.

Thompson is also a patient who primarily receives his medicine through a medical caregiver.

“You have to appreciate that Linder has been a real problem for the cannabis industry for years,” Thompson said. “The consistent message from him and the MCMA has been to put all cannabis sales under regulation. They want more sales to go through their stores. They’re advocating to essentially change the way that caregivers are able to operate, to the degree to which most of us believe would fundamentally change the program and make it nonfunctional.”

Forcing caregivers to shoulder the added burden of product testing — which can cost thousands of dollars per harvest — threatens the financial viability of the caregiver model, Thompson said. And with only 13 licensed safety compliance facilities statewide for all 30,000 caregivers and none located in the Upper Peninsula, availability for testing could also become an issue.

He added: “Our position is that the caregiver system works just fine the way it is. There’s no reason to make any changes to the way things are being done. At this point, there’s no compelling reason to make changes — except for the profit margin of those MCMA companies. It’s a nonfunctional suggestion that comes from the greedy, black heart of the MCMA.”

Until next year, licensed growers and processors are actually required to have at least two years of experience as a caregiver or employ someone with caregiving experience under state law.

“We’re opposed to it because it’s damaging to caregivers and it’s unnecessary based on this belief that big money interests think it’s a way to eliminate a source of competition,” Lowell said. “We need to be working on moving forward, not peeling things back and restricting activities.”

As for those growers who are pushing the intended boundaries of the medical marijuana program? Multi-million dollar companies like Skymint and Pleasantrees should focus their efforts on working around rather than against the state’s black market, Thompson and Lowell added.

“They’re conflating caregivers with the black market. I think it’s apples and oranges,” Thompson said. “Laws already exist that make that activity illegal and if local law enforcement officers choose not to enforce that law, that’s on them. This isn’t the legislature’s responsibility. The fact is, they’re trying to use a tool that is inappropriate for the task that they’re trying to set forth.”

He added: “Even still, why would we care about the small segment of society that is still doing things in a bad way? We don’t need to ramp up the war on drugs. Nobody should be in jail for a plant. The system that we’re operating in right now works pretty damn fine without change.”

Added Lowell: “These big players should be worried about providing quality products at a reasonable price with good service, not what’s happening elsewhere. We need to make this easier to bring people into the fold, not create more barriers and ways to obstruct the market.”

Jeff Radway, CEO of Skymint, organized a rally at the Capitol lawn in 2019 amid another failed attempt to remove untested medical marijuana from the market. Those efforts stalled, but his message doesn’t appear to have changed: BigCanna can’t compete with the affordable prices offered by caregivers. Lawmakers need to gut “unsafe” weed from the market once and for all.

Just a few months (and plenty of criticism) later, the company, then known as Green Peak Innovations, rebranded itself as Skymint. Radway didn’t return calls this week.

Another group of Lansing lobbyists also pushed similar proposals in 2019 when they formed the Great Lakes Cannabis Chamber of Commerce, again trying to rid the industry of caregivers who were purportedly “manipulating the medicine with harmful and dangerous additives.”

The trade group may stand down, but their plans aren’t going away, Thompson explained.

“I don’t believe Steve Linder will stop,” he said. “I think he’s going to try to get this in place. Maybe not this year. It may drop in 2022, making it an election issue. This isn’t going away.”

State regulators have not taken a formal position on the early plans for legislative change. The Michigan Cannabis Industry Association has also tried to distance itself from the controversy, but it issued a statement this week in opposition to anything that could harm patients.

“Our members know first-hand that our industry was built on the backs of caregivers and that patients deserve options including home grown. It is for this reason that our board of directors unanimously passed a resolution stating that the MiCIA will not support any legislative effort that is harmful to patients or their caregivers,” explained Executive Director Robin Schneider.