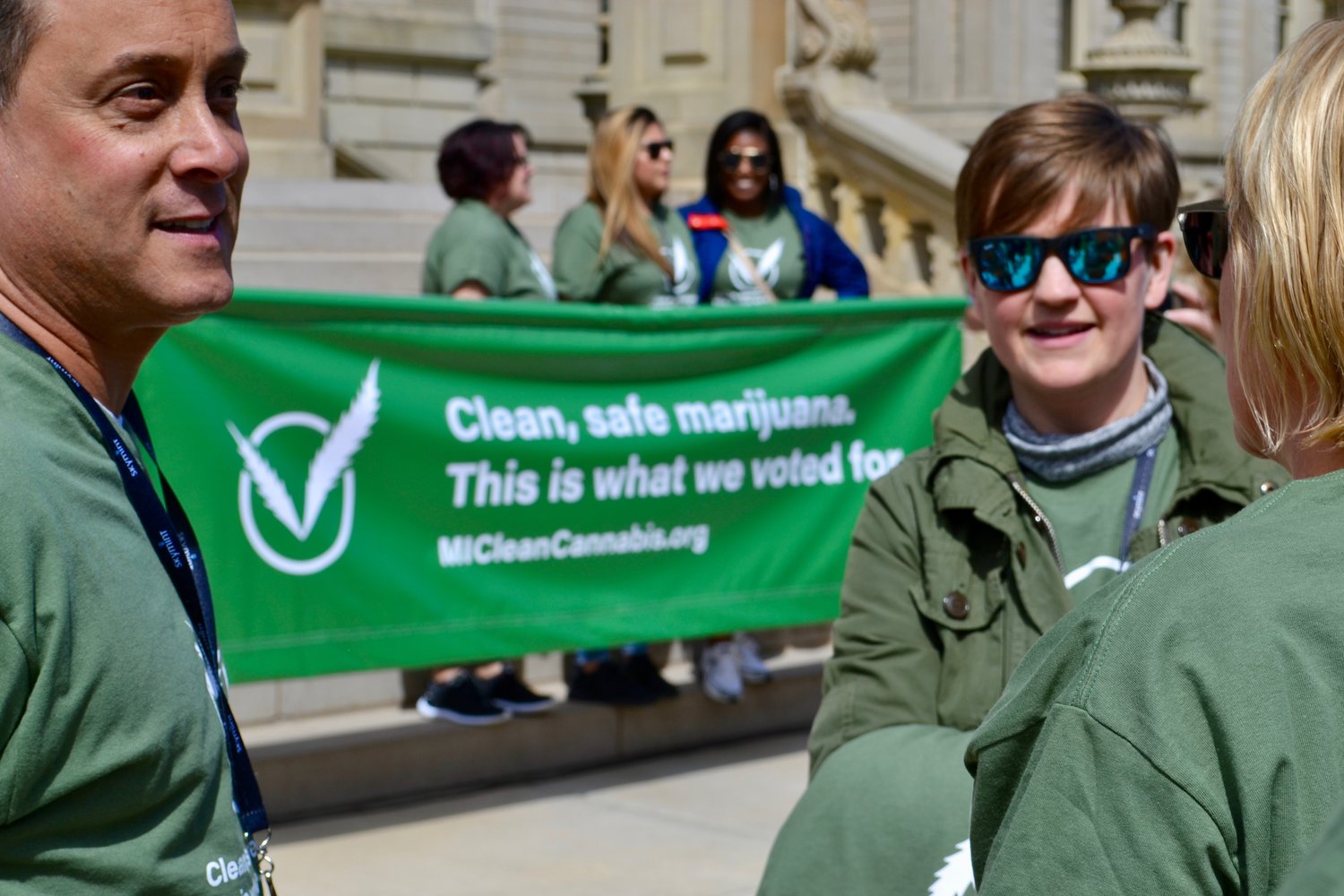 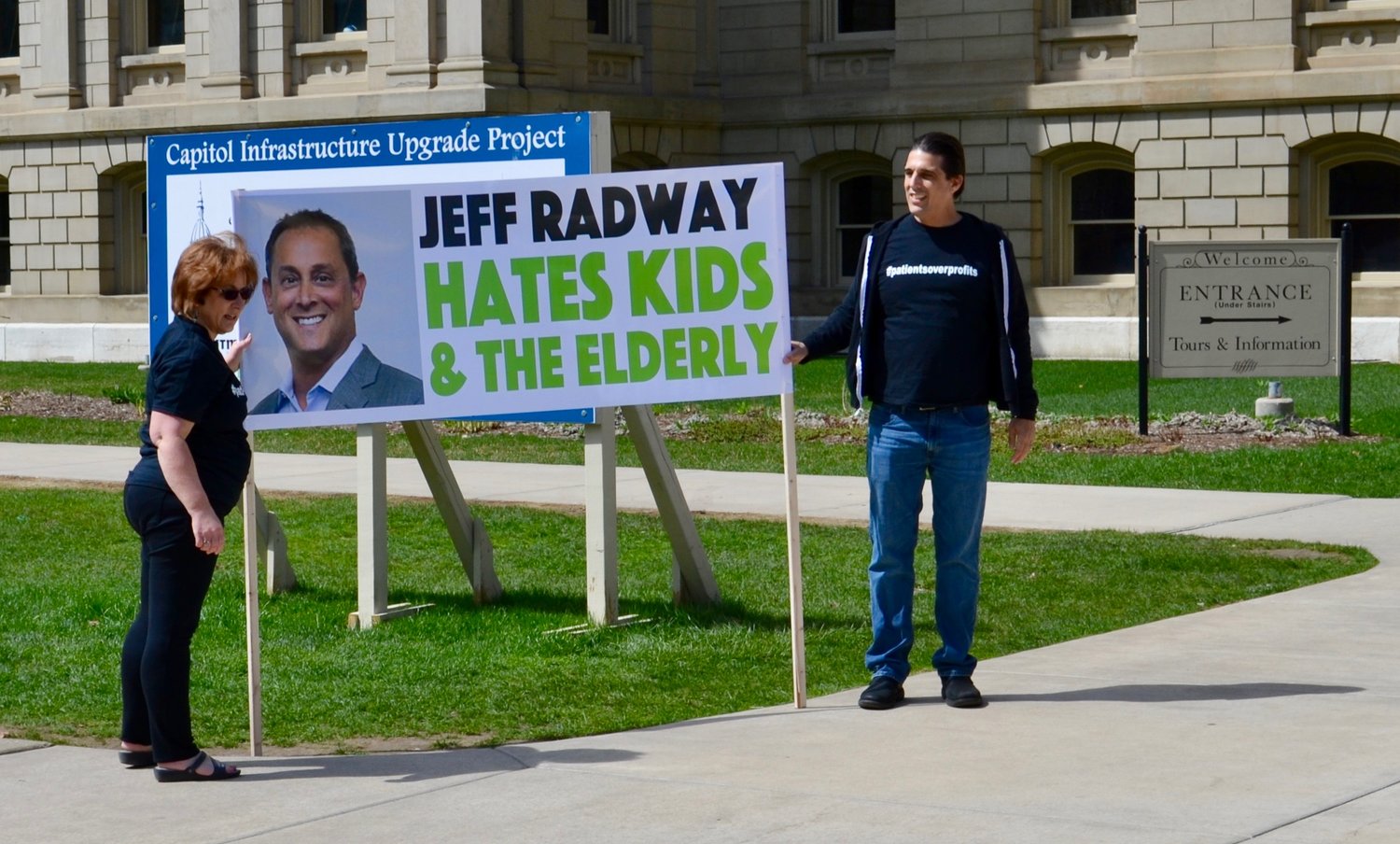 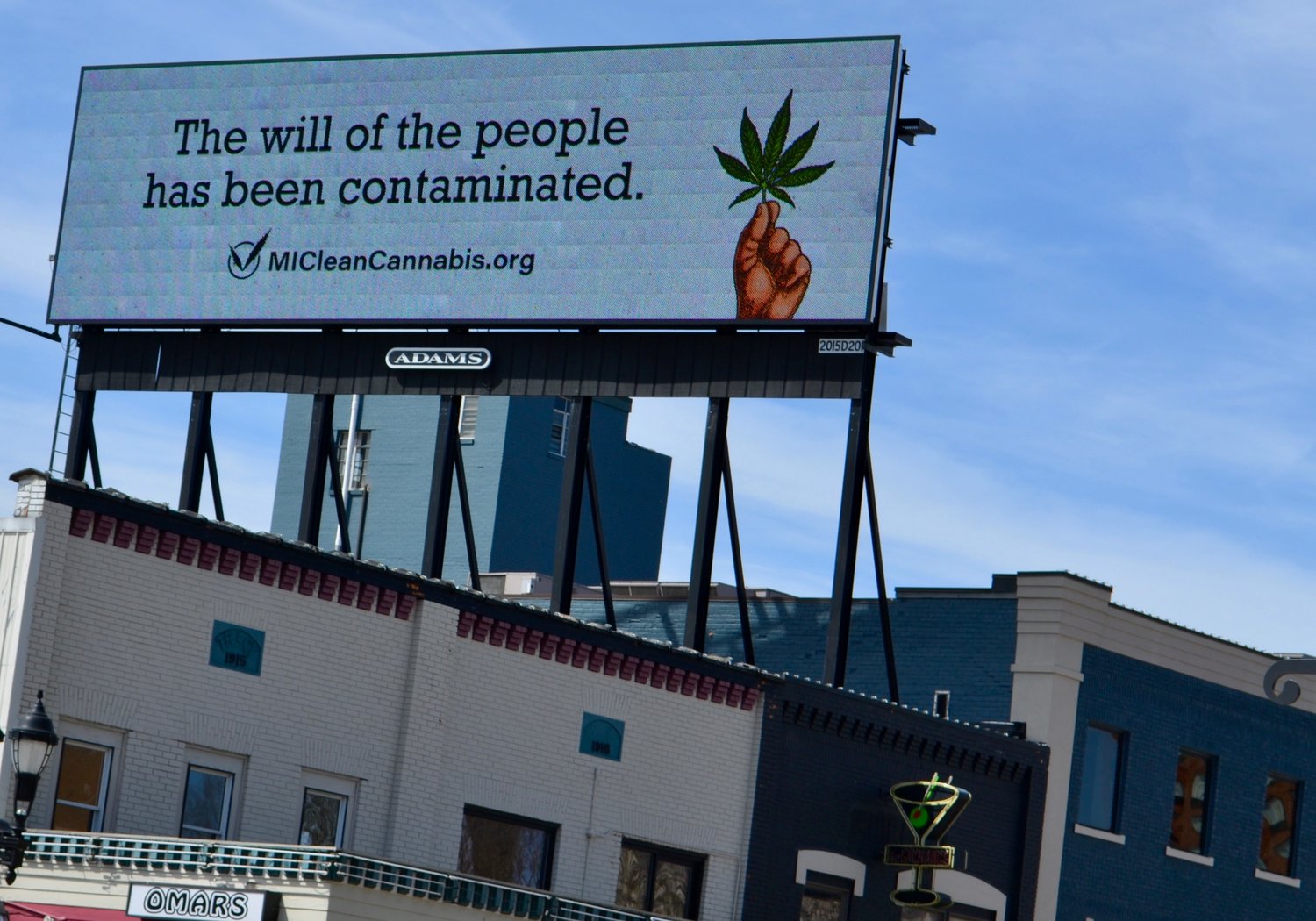 One of Green Peak Innovation's many billboards across Greater Lansing. 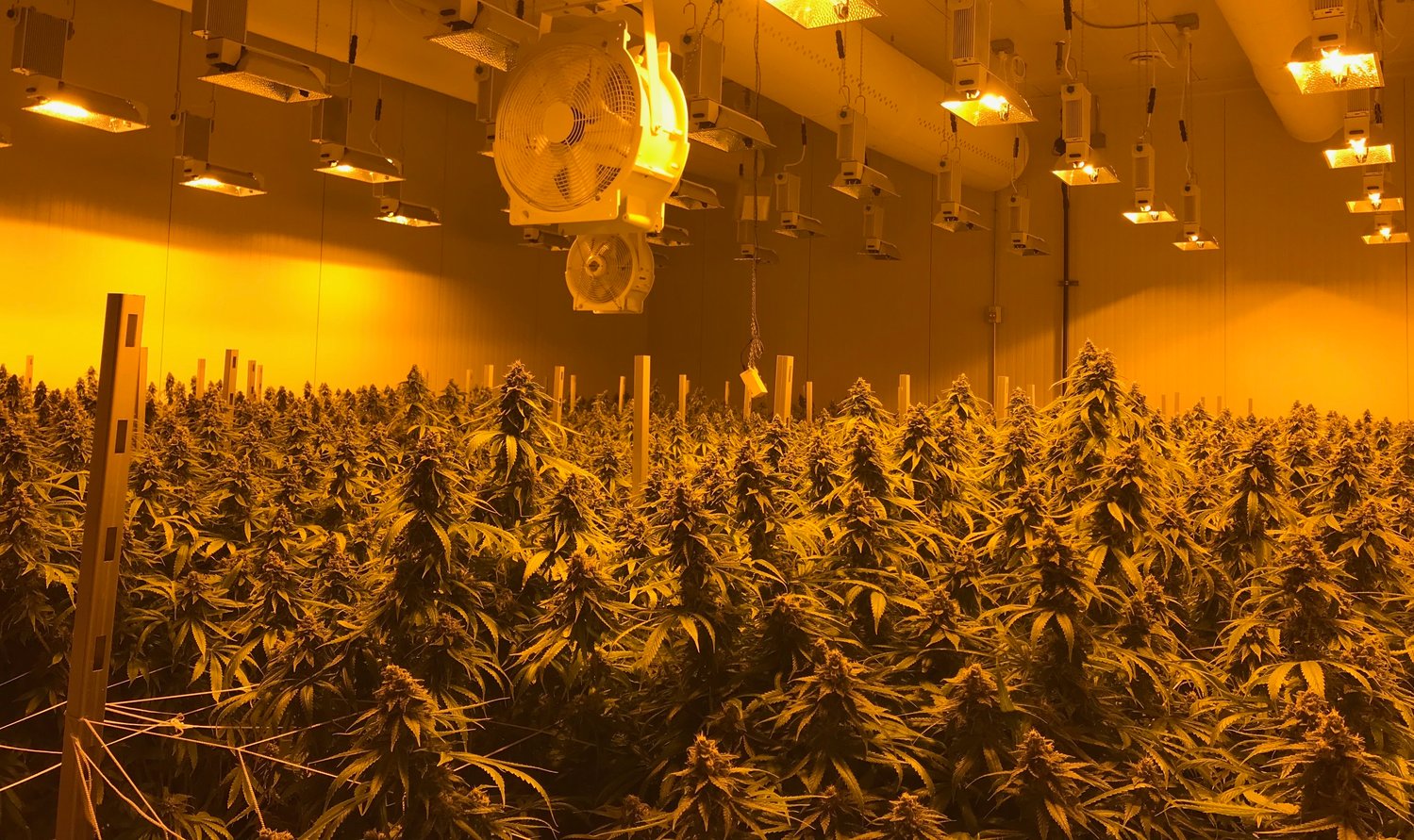 Editor's Note: This story was adjusted to clarify the wholesale pricing structure at Green Peak Innovations.

WEDNESDAY, April 24 — Licensed medical marijuana facilities are battling for control over the fledgling industry as corporate pot growers call for state officials to cut thousands of caregivers out of the retail market.

Jeff Radway, CEO of Green Peak Innovations — a fully licensed grower and processor in Dimondale — organized a rally at the Capitol lawn this afternoon. His message: BigCanna can’t compete with the affordable prices offered by caregivers. Lawmakers need to gut “unsafe” weed from the market once and for all.

“We’re at the point where the market is not transitioning to a regulated, legal, tested, safe market,” Radway explained to news reporters invited to his facility on Tuesday. “It has resulted in untested, unsafe and, frankly, illegal products on the market. From our perspective, enough is enough. 300,000 patients deserve better.”

A large crowd — fueled by corporate marijuana and licensed entrepreneurs — gathered at the Capitol steps to call for additional industry regulations and protect their share of the market the next day. They want the state to crack down on the sales of untested medical marijuana and shutter about 50 unlicensed dispensaries statewide.

The rally also centered on garnering support for House Bill 4440 — legislation set to land tomorrow in the Senate Judiciary and Public Safety Committee mandate a June 1 deadline for marijuana businesses to get a license or close their doors. It could also force unlicensed applicants to wait a year before they can reapply.

The intended result: Remove untested and potentially unsafe marijuana from the market, and drive business exclusively through licensed facilities like Green Peak Innovations before the medicine can come to patients. Currently, patients need only sign a waiver to purchase untested, caregiver-grown medical marijuana.

“We’re calling on the state to implement the licensing act as it was intended when it was passed in 2016,” added Green Peak executive Joe Neller. “A large impetus for transitioning to licensed facilities was to provide tested products for patients. The state is having a hard time getting there. We’re trying to present a different side.”

State regulators want tested products too. A deadline imposed by the Department of Licensing and Regulatory affairs allowed caregivers to supply the still-growing marijuana market until April 1. At which point, all medical marijuana was supposed to run through the hands of licensed growers and processors like Green Peak Innovations.

But as lawsuits challenging that deadline piled up in the Court of Appeals, a judge prohibited the state from enforcing those rules. Dispensaries have since stocked up from caregivers at a substantially cheaper rate than what Radway has been able to offer.

And he has an investment to protect.

“Too expensive? What they mean to say is it’s more expensive,” Neller explained.

“We have a lot of costs that go into this operation. Caregivers selling products to a dispensary was something that was allowed to evolve in Michigan but was never a legal, licensed activity,” Neller continued. “We built this company under the basis that we’d be able to live within the framework of the law and that’s just not happening right now.”

Radway has a literal ton of medical marijuana stashed away in his $15 million “state-of-the-art” facility near the corner of Creyts and N. Lansing roads. But as caregiver-grown weed continues its unfettered stream into the retail market, dispensaries are shying away from Radway’s supply.

Radway — and others — want to take it back.

Green Peak launched a marketing campaign earlier this morning with an estimated budget nearing $300,000. The billboards line the Greater Lansing area and claim “The will of the people has been contaminated” — a reference to untested marijuana that had been recalled for traces of various chemical and mold residues.

“There are really dangerous products being sold out there,” Radway argued.

For context, the state hasn’t tracked a single documented case of reported illness or negative side effect from the consumption of any untested, caregiver-grown marijuana purchased from state dispensaries.

But that’s not the point, Neller noted.

“Because they didn’t drop dead the moment they got it, it doesn’t mean it’s not harmful, right?”

Others are concerned about the consequences that a deadline could have on medicinal availability. A counter-protest that formed alongside Radway's rally saw his opponents arguing that caregivers — as the industry continues to get off the ground this year — will maintain a vital role in supporting the supply to meet the statewide demand.

About a dozen advocates, wearing “Patients over profits” shirts and hoisting “Jeff Radway hates kids” signs, suggested that corporate greed might be more of a motivating factor for Green Peak’s campaign than patient safety. Some opponents said any state deadline would invariably raise prices for patients and limit product availability.

Rick Thompson, a board member at the Michigan chapter of the National Organization for the Reform of Marijuana Laws, claims that licensed facilities — such as Green Peak — cannot crank their operations to full capacity and expect to monopolize the market. Patients already have a working supply; it takes time to switch.

“Patients don’t care how much it costs to grow the cannabis,” Thompson wrote in a recent online blog.

“If your pricing is not in line with the typical price these patients are used to paying, stores will be empty and rooms full of pricey, unsold cannabis will be the norm. … Seducing those people into brick-and-mortar stores will take time, marketing money and high-quality, inexpensive cannabis.”

Radway, for his part, said he plans to generate about $3,200 per pound for his product on the wholesale level — or a rate of about $7 per gram. Cannabis Benchmarks, a reputable market publication that tracks prices for the industry, sets the national average at $1,089 per pound. In Michigan, that rate rests around $2,000 per pound.

“There are a lot of untruths, misdirection and white noise,” Radway said. “The truth of the matter is that our prices are competitive. We’re not about gouging patients. We’re actually about access and making it’s safe, secure and tested. … Shouldn’t everyone be required to follow the same rules? That’s all we’re talking about here.”

Visit lansingcitypulse.com for previous and continued coverage on the statewide medical marijuana industry.