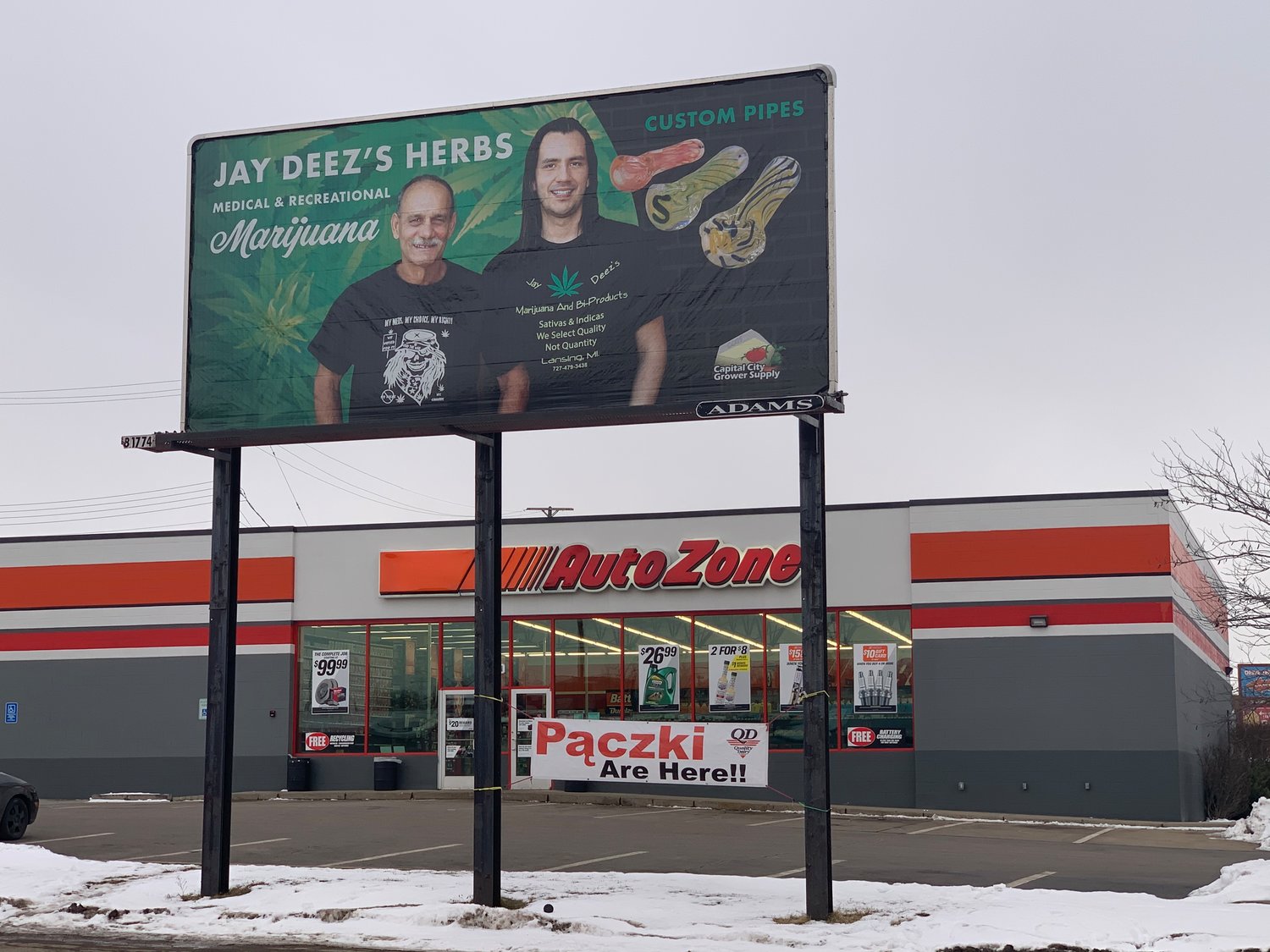 Although this billboards might suggest otherwise, Jay Deez's Herbs isn't licensed to sell recreational marijuana in the city of Lansing.
Kyle Kaminksi 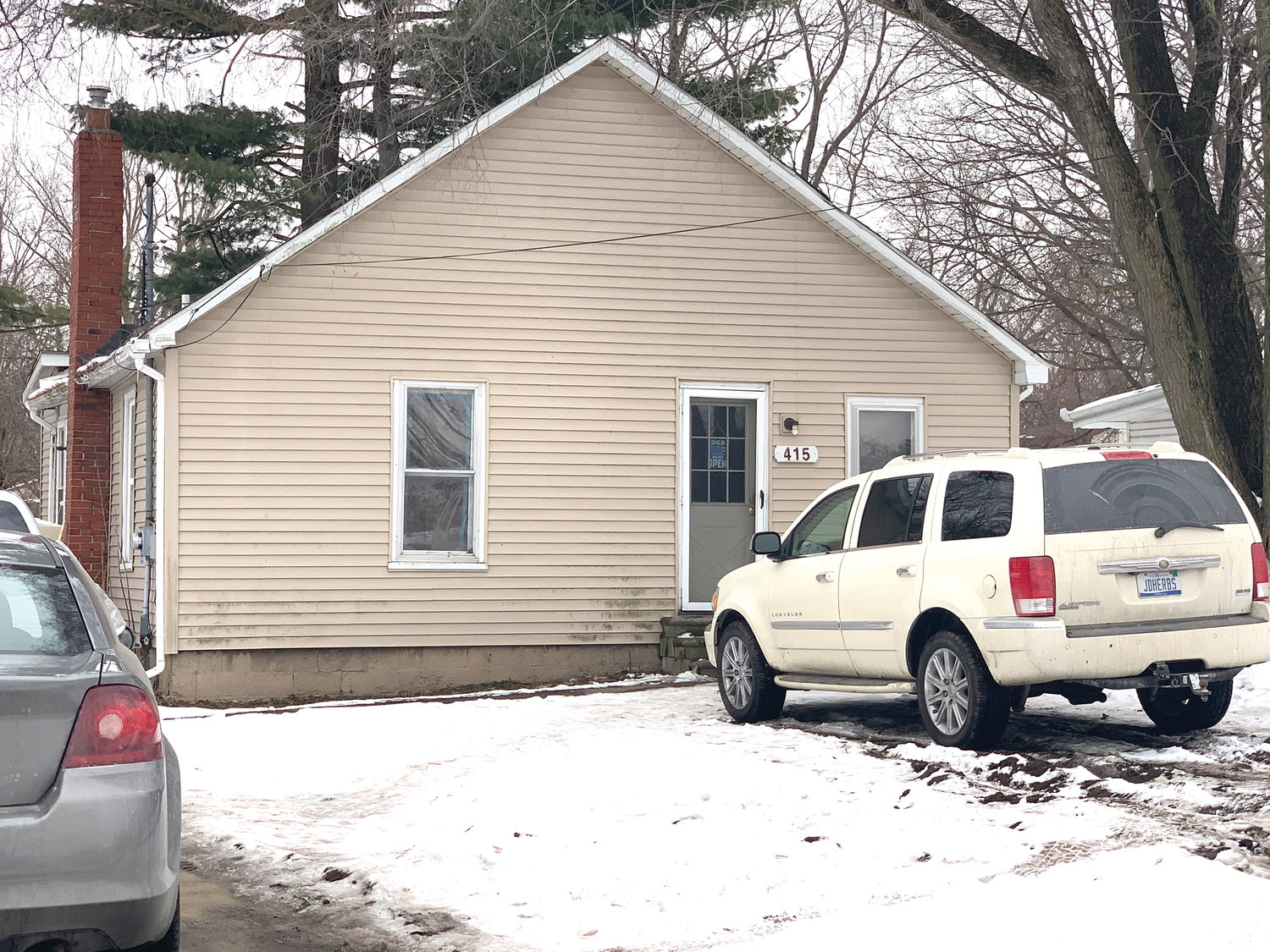 A City Pulse reporter tracked Jay Deez's Herbs to a small home at 415 N. Fairfield Ave. where he bought a $30 bag of weed on Monday.
Kyle Kaminksi
Posted Wednesday, February 19, 2020 11:03 am
Kyle Kaminski

At least two billboards for Jay Deez’s Herbs popped up in Lansing within the last few weeks. One in the Stadium District shows a picture of its owner, John Dinaso, along with a tagline for “medical and recreational marijuana” and custom glass pipes.

One problem: No recreational shops have been fully licensed yet to operate in Lansing.

This reporter tracked the business to a small home at 415 N. Fairfield Ave., wedged within a northside residential neighborhood on Monday. The door was locked, but Dinaso and another man welcomed me inside and said his home was the first “business” legally able to sell recreational marijuana within the capital city.

Dinaso’s partner — also pictured on the local billboards — sold this reporter a $30 eighter of StarDawg, a surprisingly potent sativa strain at a relatively affordable price. More than three grams of weed easily nets at least $40 on the recreational market elsewhere. He also said edible products would be available later in the week.

That is, of course, unless the Lansing Police Department decides to actually enforce laws on black market sales.

An LPD spokesman said local authorities are actively investigating the business following reports of unlicensed marijuana sales to both medical and recreational pot smokers. He declined to comment further.

“If it’s at a residential address, they are definitely operating illegally,” said City Clerk Chris Swope. “We don’t have any retail sales allowed in residentially zoned areas. It’s not possible to get licensed at a location like that.”

Under state law, recreational marijuana sales are only permitted at fully licensed dispensaries. An exception is carved out for “gifting” marijuana, but money cannot legally be exchanged for unlicensed products. This reporter — among others, based on Internet reports —paid cash in exchange for weed.

Dinaso, who goes by a “business name” of Jay Deez, later told City Pulse that he was licensed by the state to sell recreational marijuana. A quick review of state licensing records showed that to be false. Dinaso hasn’t applied for a license with the city either, say city records posted online.

“We’re the first in the entire state to be legal,” Dinaso insisted. “I have a letter from the state that said they don’t regulate us at all. This is all planned out. I didn’t go to the city either. I went to the state and bypassed the city. You have to have a good legal mind to be able to do all of this. These laws don’t regulate my business at all.”

Dinaso declined to expound on his legal theory, noting that others would be likely to “steal his trade secrets.” But he said that his shop has been operational for at least 10 years and nobody has ever tried to shut it down.

Relatively slim enforcement from both the Lansing Police Department and the Ingham County Prosecutor’s Office in the wake of recreational legalization could help explain how Dinaso’s business has been able to thrive.

In 2017, the Lansing Police Department made a total of 18 arrests related to illegal marijuana sales and cultivation. In 2018, those arrests increased to 24. But in 2019, after weed was legalized statewide for adult use, only two people have been arrested for illegal marijuana sales. Statistics for 2020 were not immediately available.

Since Dec. 1, 2018, the Ingham County Prosecutor’s Office has issued five charges involving illegal marijuana sales. Four of them involved companion charges, such as possession of cocaine or assault on a police officer. The other involved a whopping 32 lbs. of marijuana that prosecutors suspected was set for illegal sales.

“Some Michigan prosecutors are getting involved with how recreational marijuana is handled on the local level,” Ingham County Prosecutor Carol Siemon explained by email. “I’m not. My belief is that the businesses should be regulated like bars and other businesses, i.e., by municipal attorneys and regulatory bodies.”

Meanwhile, city officials this week announced a list of conditionally approved recreational dispensaries as they prepare for a newly legalized market to take root in Lansing. And Jay Deez’s Herbs certainly isn’t on the list.

A total of 11 recreational retail licenses for marijuana have been conditionally approved by Swope’s office. Those shops still require state approval and a certificate of occupancy before they can operate in Lansing, but it’s one step closer to recreational availability in Lansing.

By city law, 28 dispensaries can participate in the recreational marijuana market. Several of those recently approved retailers are already licensed for medical sales, which could help streamline the process. Swope said recreational availability at those locations depend largely on how quickly the state can license them.

Visit lansingcitypulse.com for additional coverage as the Lansing Police Department continues its investigation.