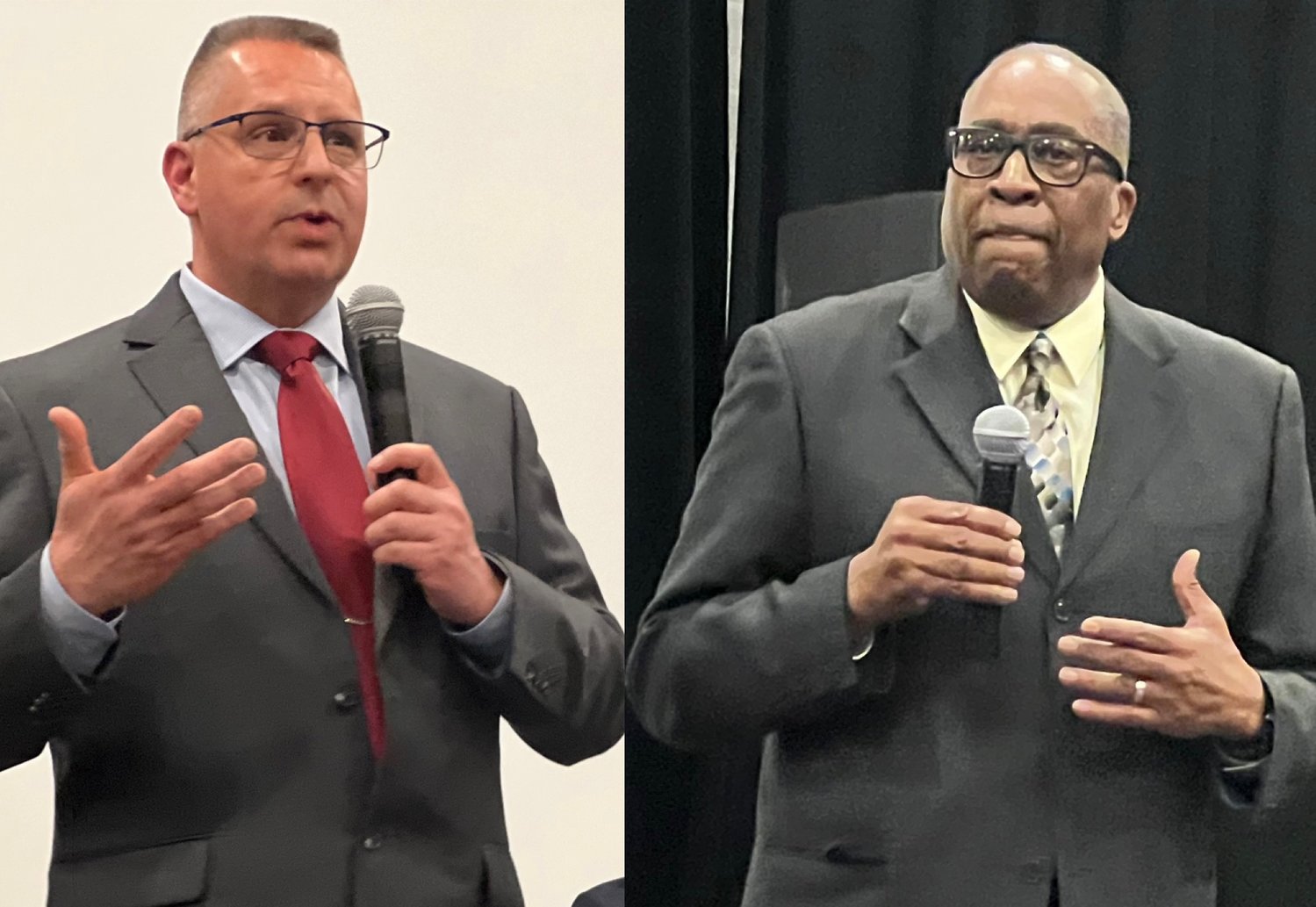 FRIDAY, March 25 — The Lansing Fire Department will have a new chief as early as next week after the Board of Fire Commissioners voted yesterday to recommend two finalists for the job: Battle Creek Fire Chief Brian Sturdivant and Sterling Heights Assistant Fire Chief Edwin Miller.

The two candidates — among 19 who applied for the job — are  set to meet with Mayor Andy Schor early next week. And one of them will likely receive a job offer before the end of the month, becoming the sixth person to serve as chief of the department within the last four years.

Sturdivant grew up in Battle Creek and has served as the chief of its Fire Department since 2018. Just after he took that job, he told the Battle Creek Enquirer that “it doesn’t get better than serving as a leader in your hometown.” But apparently, Sturdivant is ready to keep on moving.

Sturdivant’s career in the fire service includes 15 years spent in Fulton County, Georgia, and spans three decades, four departments and four states,  including in Arizona, California and Virginia. He’s a graduate of Grand Canyon University, Naval Postgraduate School and the National Fire Service and Command Program at the University of Maryland. He’s also a certified public manager and a recent graduate of a municipal leadership program at Harvard University.

Sturdivant’s father graduated from J.W. Sexton High School, so the opportunity to work in Lansing is “personal,” he explained at a meet-and-greet hosted by the city Tuesday. And as the only Black man on the stage, he didn’t mince words about the repeated allegations of a racially discriminatory culture that has long brewed behind the walls of the city’s fire stations.

As a younger firefighter, Sturdivant said his white department leaders had forced him and his Black colleagues to share the same bunk beds and only use the same plates and silverware.

He added: “I do understand that there are myriad issues here in the city of Lansing — personnel issues. These are issues that I’d look to address because I have personal involvement with what that does to an individual. I was marginalized. I was minimized. I vowed to myself that I would never allow something like that to happen under my watch. It hurts. It’s demoralizing.”

Sturdivant, who identifies as a “lifelong learner,” emphasized three key components that he credited for building his career: education, experience and professional development. If hired, he said he wants to deploy a “strategic plan” that would set LFD on course for success.

“This is an organization with a huge level of potential. A lot of that potential is untapped,” he said. “There is a lack of a plan, a lack of direction. I heard someone say the rudder on the ship is missing. The lack of planning process has become a bit of a choke point for the organization.”

He added: “This is not an indictment against anyone or anything, but it’s hard to manage an emergency service delivery when everything is reactive. When you lean so heavily on reaction, it becomes crisis management. And there’s no organization that can survive that over time.”

Sturdivant told the Battle Creek Enquirer in 2018: “A couple of my relatives said you went all the way around the block to come back home. Coming home is great.” He also used some similar language this month in conversations with members of the city’s Board of Fire Commissioners.

Sturdivant told Commissioner Charles Willis that Lansing was a final “destination job” for him.

“He says he wants to come home,” Willis told the rest of the Fire Board yesterday evening. “These are not guys who were talking about staying here for one or two years and moving on.”

Sturdivant told City Pulse: “I’m in the process of recruiting a deputy fire chief in Battle Creek. I think I’ve set out a platform and established a level of continuity there. But at the end of the day, if I don’t get this job in Lansing, we’re still doing some good stuff in Battle Creek. I can’t lose.”

Miller is an assistant chief at the Sterling Heights Fire Department, and since joining the department in 1992, has served in just about every position there — except for as its chief.

Miller said he applied to replace outgoing Sterling Heights Chief Chris Martin in 2020 but was passed up for the job last January for a more reform-minded candidate from Illinois.

“The city manager wanted somebody from outside to come in and change the culture a bit,” Miller told City Pulse. “I’ve achieved all my goals at Sterling Heights. I’m eligible to retire. In the fire service, when you get to that age, you’re sort of like chum in the water. They want to move on. I’ve accomplished my goals, so now I have new goals and I’d like to be a chief somewhere.”

Miller has an undergraduate degree in fire administration from Eastern Michigan University and is a graduate of its Fire Staff and Command School. He’s also a licensed paramedic and was appointed by the governor to serve on the state’s Public Safety Communications Commission.

At Tuesday’s forum, he said he applied for the job in Lansing because he “likes a challenge.”

“I understand that an outside candidate has disadvantages. There’s that intrinsic knowledge that an outsider has to learn. The culture of a fire department is an animal in and of itself, and sometimes it takes time to change,” he said. “I always look for the root cause of the problem.”

Before he applied for the job, Miller said he read local newspaper headlines (likely from City Pulse) that involved “issues about inclusion and how people are treated” at the Fire Department.

His takeaway: “To me, that’s an opportunity. I’m a terminal optimist. I look for the positives in everything,” he said. “They need a little direction. That’s what they need. They need help to achieve the goals they want to do, and that’s where I’d like to help. I’m really big on planning.”

He added: “I believe in communication and transparency. I also firmly believe that there are times where we might not see things the same way, but we need to understand that everyone has their own beliefs and experiences and that we can build on those to do the right thing.”

If hired, Miller said he’d like to lay out a concrete plan for replacing vehicles and equipment before they break, as well as introduce staff to more professional development opportunities. His “biggest concern,” however, is deploying strategies to better recruit and retain employees.

Miller said that he has been accused of having a “crazy vision” of new ideas in Sterling Heights.

“I want to break the mold sometimes. I want to challenge the status quo,” he explained to the crowd at Tuesday’s meet-and-greet event. “And I want to make sure that we’re getting the best out of our people and challenging our people and talking to our people and being transparent.”

He added: “We have two ears and one mouth. We should spend twice as much time listening than talking. That would be my first goal: I’d get to know every employee, hear their concerns and see how we can all work together to build a brighter future at the Lansing Fire Department.”

How’d we get here?

Nineteen people  applied for the job. Only nine were picked for initial interviews.

Sturdivant and Miller were recommended to the mayor by the Board of Fire Commissioners from a three-person pool that had initially also included Interim Fire Chief Michael Tobin.

A selection committee comprising Commissioners Charles Willis and Kris Singh, Human Resources Director Linda Sanchez-Gazella and an untold number of mayoral appointees removed Tobin from the pool after eight hours of interviews and deliberations on Wednesday.

“We deliberated and discussed at length every question, every comment. It was an amazing process and I’m very proud of my city because this was fair,” Singh explained yesterday. “ At about 5 p.m. we finally came up with the two candidates who we wanted to see go forward.”

Tobin has served as interim chief on at least three separate occasions. He replaced Interim Chief David Purchase (who  replaced former Chief Randy Talifarro) in January 2019 before former Chief Mike Mackey took the reins in March 2019. Tobin took over again after Mackey resigned in August 2020 — just days after a racial discrimination suit was filed against LFD.

Former Fire Chief and Emergency Management Director Greg Martin was installed as chief about a month later. Tobin took over again about three months ago after Martin left the post.

Tobin was criticized online by Merica 20 to Life for his response to a question about diversity and inclusion on Tuesday night. In an apparent attempt to empathize with those who have faced racial discrimination, Tobin told the crowd a story about how his first brush racist behavior — how his white Irish grandmother used to call his white Italian mother an “Italian wench.”

Afterward, audible groans could also be heard among the crowd at Tuesday night’s forum.

On Wednesday morning, it was also revealed in a FOX 47 News story that Tobin had shared a series of “controversial” Facebook posts in 2013 that some have since deemed offensive. One post was a satirical news story about how “staring at breasts increases heart health.” Another had described a story of a boss laying off employees because they supported President Barack Obama. Another one had suggested that “even a dog” was a better leader than Obama.

Willis said the hiring committee was not aware of those social media posts. As such, they played no role in the decision to pick the other two candidates over Tobin, Willis told City Pulse.

A Texas-based firm called Strategic Government Resources was paid about $25,000 from the city to recruit candidates and conduct the search for the next fire chief. City officials said if the selected candidate ends up leaving within the next 18 months, they’ll redo the search for free.

The firm was hired at about the same time as Public Sector Search and Consulting was contracted (for about $40,000) to bring in a replacement for former Police Chief Daryl Green.