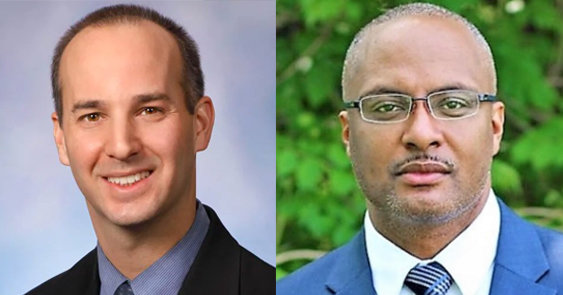 Lansing Mayor Andy Schor (left) acknowledged racial problems in the Fire Department in a recorded conversation between him and department executive David Odom, one of nine current and former Black city employees who have sued Schor and others for discrimination.
Posted Saturday, August 15, 2020 2:24 pm
Kyle Kaminski

SATURDAY, Aug. 15 — As several current and former Black city employees push forward with a lawsuit against the mayor and the city of Lansing, leaked audio from last year has surfaced of Lansing Mayor Andy Schor recognizing and apologizing for alleged racism at the Lansing Fire Department.

The tape  — which you can hear at the end of this story — appears to be of a meeting in May 2019 between Schor and LFD’s administrative chief, David Odom, one of nine plaintiffs named in a discrimination and race-based retaliation lawsuit filed Wednesday.

“I’m the one who’s responsible for the city, and for me, I believe that I believe you,” Schor added. “I believe this is what you faced and I will apologize on behalf of the city to you. I don’t want to see any employee face that. I really don’t. And if you have gone through those things, I believe you and I would like to find a way forward. I’d like to figure out — moving forward — how you help how we work together moving forward. My job is making sure things go well within the city.”

After firefighter Michael Lynn Jr. filed a separate discrimination lawsuit against the city last year, interim Fire Chief David Purchase allegedly told Odom that Lynn “could not be trusted” and that Odom needed to “distance himself from race issues” if he ever hoped to earn a promotion, the new lawsuit claims.

Purchase also allegedly told Odom that he was “tired of this black stuff” at the department, according to the lawsuit. Odom also complained that he was subjected to a hostile work environment and threats whenever he discussed concerns with his supervisors.

The lawsuit claims Schor promoted those supervisors in an alleged effort to silence Odom.

City Attorney Jim Smiertka called the recent lawsuit “very political” and “inflammatory,” reported the Lansing State Journal. He also said it’ll likely be “very expensive” litigation as it continues. But Schor’s own statements in the recorded meeting also suggest that both lawsuits are about more than just politics.

City Pulse published a series of stories on that lawsuit and various claims of racism within the Fire Department. The city, in response, launched a marketing campaign to highlight diversity. Schor also dismissed the notion of discriminatory treatment in an interview with City Pulse.

“We have not heard any other specific complaints. There was one individual who has not been happy,” Schor said in an interview with City Pulse last year. “I don’t want to minimize any concerns here, but we’ve addressed that situation quickly and we’ve moved forward.”

He phrased it differently to Odom a few months later.

“I would retract that in a heartbeat,” Schor told Odom. “I know there have been in the past. I know the incident that led to the lawsuit, I mean, I know that all happened and we’ll address it.”

Former Fire Chief Randy Talifarro is also suing Schor and the city of Lansing for racial discrimination. He told City Pulse last year that he quit, in part, because the workplace became “extremely uncomfortable” after Schor took office. He also contended that Schor, even before his term began in 2018, had conspired to fire him based on racist rumors from white firefighters.

In another recently surfaced clip, Schor can be heard explaining to the firefighters union before his election how he had “not heard good things” about sharing a fire chief with the city of East Lansing, noting that he hadn’t talked to Talifarro but would prefer to end the dual-chief position.

A firefighters union member can be heard asking Schor about the concept. Schor responded:

“I like having a chief here in Lansing who will devote his or her full attention to the city. I won’t give you a guarantee one way or the other until I have all of the information. That’s how I operate. But from what I’ve heard, I’m not a huge fan of the system. We’ll see what happens.”

The leaked audio first appeared last night on an episode of the podcast Merica 20 to Life Live.

You can listen to that audio here: