Plans still under way to save Moores Park Pool 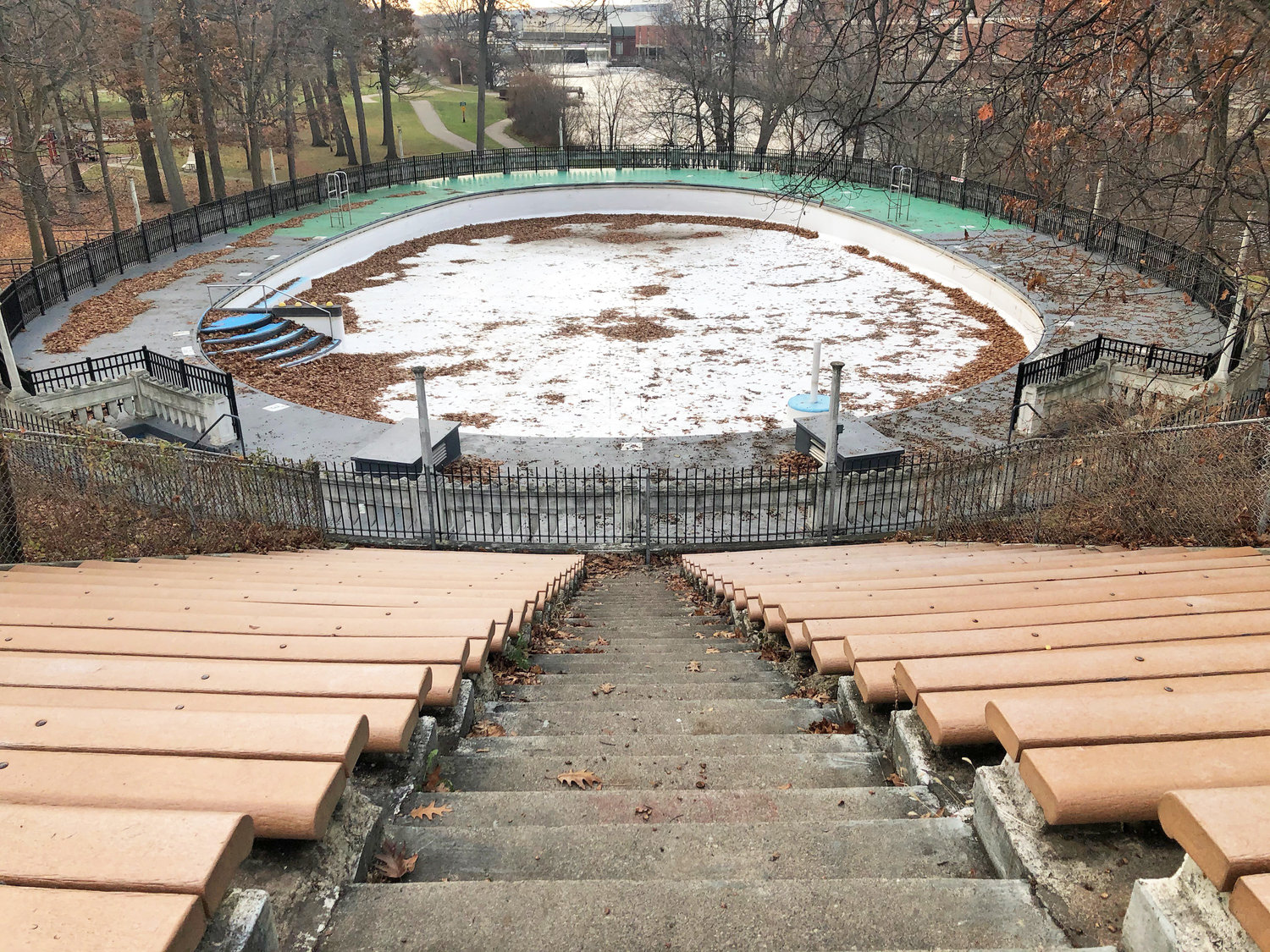 Efforts to save the iconic Moores Park Pool, pictured here in December 2019, are slowed by the pandemic but not dead, officials say.
Kyle Kaminski/City Pulse
Posted Tuesday, May 5, 2020 12:49 pm
Kyle Kaminski

TUESDAY, May 5 — Lansing is still rallying to save Moores Park Pool, even as the coronavirus delays community fundraising efforts and quashes any hope of the pool reopening this summer.

As the COVID-19 pandemic spread across Lansing, city officials quickly pulled the plug on refilling the historic — but quickly dilapidating — public pool along Moores River Drive. With the leaks, badly needed repairs and rising maintenance costs, the move was all but inevitable.

The city is also expected to curtail most, if not all, of its summer programming for the public.

But while residents remain stuck in a virus-induced lockdown, slow but steady efforts are still under way to assess the extent of the repairs, raise some cash and restore the 97-year-old pool. Even a global pandemic hasn’t killed a local spirit for historic preservation.

“I’m not at all willing to say we’re giving up,” said Veronica Gracia-Wing, who chairs the city’s Parks Board and a new citizens committee to preserve the public pool. “I think it’s a time of deep evaluation on what we can do and what’s prudent to do right now.”

“We were already sort of building the ship from the ground up — now throw in this new pandemic situation,” Gracia-Wing added. “I don’t think anyone is losing sight of the goal, but it certainly has had an impact on our work. This isn’t a one-and-done. This is an investment in continued work.”

The unique aboveground pool, which was built in 1923, was designed by Wesley Bintz, Lansing’s former chief engineer. It is believed to be the oldest continually operating public swimming pool in the country. Bintz had designed more than 100, but only a handful still exist.

Late last year, the city announced $1.2 million in “needed” repairs to bring the pool up to snuff, including $414,000 to replace the iconic concrete railing and patch up the spider-cracked interior, $410,000 to overhaul the plumbing and another $357,000 for a fresh heating system.

Additionally, the pool sprang a leak last summer, costing the city about $1,400 per week to keep it filled while chlorinated water presumably spilled beneath the soil and into the Grand River. Extra cash for pool repairs was already sparse. Now the city is facing a budget shortfall.

The groups only met a handful of times before the pandemic struck a few months later.

“It’s pretty slow,” said Dale Schrader, president of Preservation Lansing, which partnered with the Historical Society of Greater Lansing last year to help generate ideas and raise some cash. “We haven’t really had a chance to meet as a group but we’re still keeping things moving.”

A snazzy fundraising gala planned for late last month — which could have bankrolled at least a few concrete railings — was canceled because of the statewide shutdown order. Organizers hope to reschedule it this year.

In the meantime, no other avenue exists to accept donations from the public. Schrader said a partnership with the Michigan Historic Preservation Network could eventually allow the nonprofit to act as a fiduciary and collect tax-deductible donations earmarked for the pool later this year.

Donations may also be made to the city and later dedicated toward the pool.

“It’s one of the most beloved, historic places in Lansing,” Schrader added. “This is a big one. I’ve been involved in some fundraising in Lansing, but personally, this one seems to have much more support than any other preservation project that I’ve ever been involved with around here.”

Schor’s administration, while grappling with a budget deficit, has also kept plans to restore the pool on the side burner. While there likely won’t be enough general fund dollars to commit to the project, parks millage cash could be allocated — and matched with grants — to support repairs.

“Parks millage money can only be spent on parks and recreation-related things,” Schor said. “So, with money coming from millage, having a second open-air pool is an important part of our parks and recreation system. I’m hopeful that the committee will be able to raise some funds.”

To assist with financing, the city has also partnered with the Michigan Public Health Institute to apply for federal grant funding through the Save America’s Treasures Program, pledging $500,000 in matching support for restoration efforts. The awards will be announced this month.

Parks Director Brett Kaschinske said the city has no plans to seek additional funding through the county’s parks and trails millage, even though some Ingham County officials have suggested it. That cash would be better used throughout the city’s expansive trails system, he said.

The city also requested bids to determine the true scope of the needed fixes at the pool. The repair estimates released last year were only preliminary. Gracia-Wing said those proposals are due back by May 19 and will provide a better understanding of the work that needs to be done.

More time could also allow both community organizers and city officials to better understand evolving general attitudes toward public facilities like swimming pools in a post-pandemic world. Will residents be more apprehensive to crowd these spaces in the future? Only time will tell.

“It’s truly about just sitting tight right now,” Gracia-Wing added. “Also, what’ll be the public tolerance for a space like that? I think that’s a key discussion point that we need to have. Will we have a vaccine in a couple of years to flip things? We’ll be chatting more about all of that.”

Editor’s Note: City Pulse needs your support more than ever. Advertising — almost all our revenue — has fallen sharply because of coronavirus-related closures. Our staff is working around the clock to keep you informed. Please do what you can to contribute to the City Pulse Fund. All donations are tax-deductible.