Lansing cracks down on fires at local homeless camp

Schor: No flexibility for homeless amid coronavirus pandemic 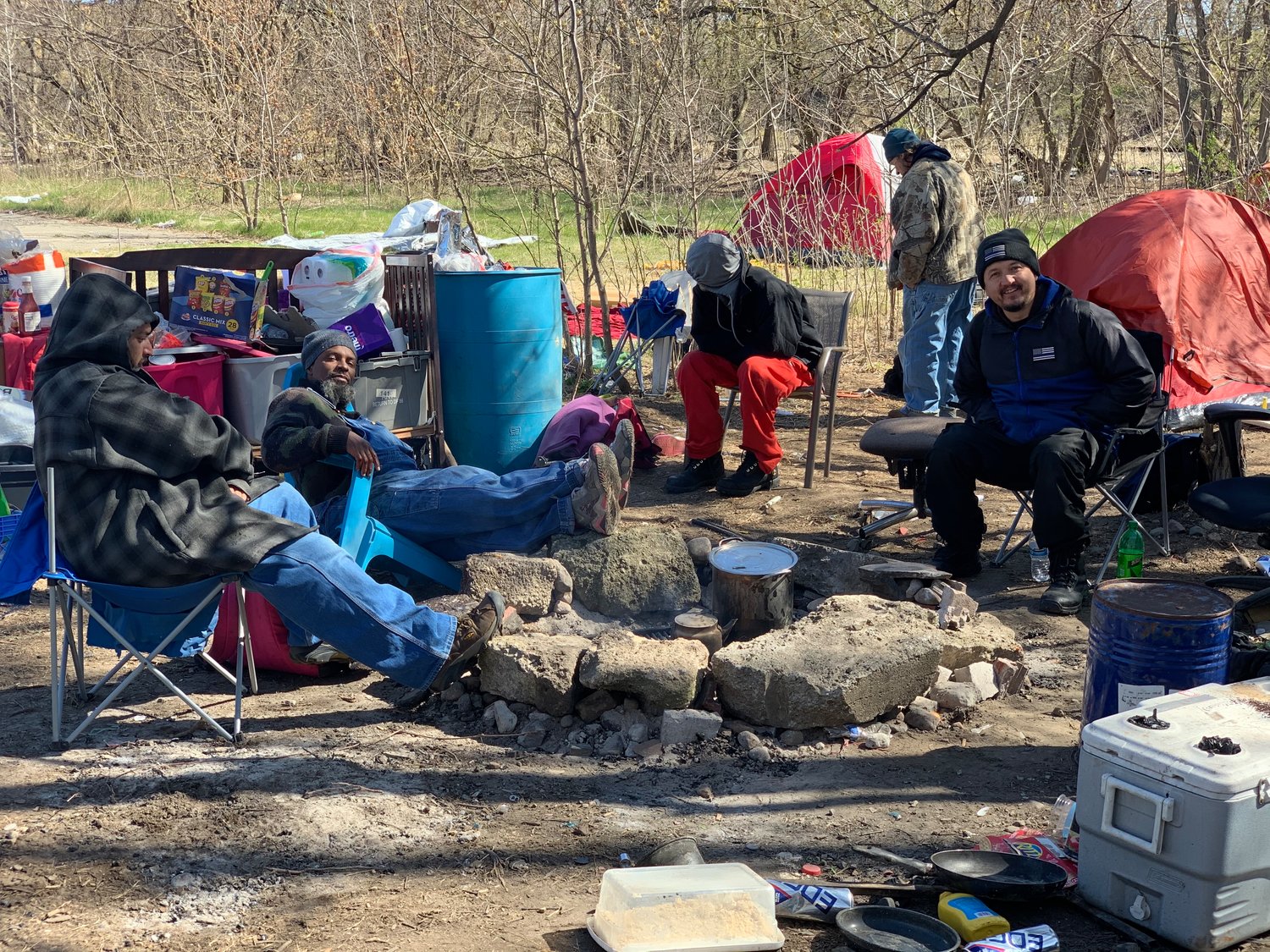 MONDAY, April 20 — At least a dozen homeless people in Lansing could be left in the cold tonight as the city enforces a blanket suspension on open fires amid the COVID-19 pandemic.

Over the weekend, “some asshole” called to report a small campfire at a makeshift homeless encampment off Larch Street, said a firefighter at the Lansing Fire Department before a crew extinguished the flames. The encounter was captured on a video later obtained by City Pulse.

Four firefighters — none wearing masks — rolled up in a LFD rig to extinguish what appeared to be a smoldering pile of embers. Even small flames can help the group to keep warm or to boil pots of water. But the law is the law, firefighters said. No new burn permits are being issued.

“I don’t want to ask you to put this out, but it is what it is,” an unidentified LFD firefighter told the camp. “You’re back here minding your own business, not doing anything wrong. I get it. Some asshole called on you guys. I apologize. I hate doing this. I gotta make sure it’s out.”

And because Mayor Andy Schor and the Fire Department aren’t willing to look the other way, firefighters could be back again tonight to enforce the law as temperatures drop to the low 30s.

“Burn permits ensure that fire is contained, brush isn’t burned, water is in the area to prevent a big fire from breaking out,” Schor told City Pulse earlier today. “These are all safety issues that must be considered when there is fire involved to prevent the dangers to surrounding areas.”

Burn permits are $50, and usually out-of-reach for the homeless community. But the city isn’t issuing them regardless. The goal: reduce all unnecessary safety risks amid a global health crisis. As a result, those living at the small encampment near downtown don’t have many options.

“We started it right up again,” said Anthony Esochea, a self-declared co-founder of the camp that houses at least a dozen homeless people in tents off Larch Street near downtown Lansing. “The thing is: We have our freedom here. We don’t have to report to any place at any certain time.”

True to his word, a small fire was again heating up coffee on the property this morning.

“I call this Our Town,” another camper told City Pulse today. “This might be Lansing, but this is our town here. I’ve been locked up too much in my life. I know how to govern myself out here.”

The makeshift campground formed at least a few weeks ago as local homeless shelters filled to capacity. Several tents are scattered across the vacant lot, apparently allowed only through passive permission from a wealthy, out-of-town owner with little regard for his more distant properties.

Donations are dropped off regularly. Residents still occasionally travel to the nearby homeless shelters for carryout meals and then return to congregate around a small fire pit in the woods. Empty beer cans are piled up nearby. And unlike local shelters, the camp has no formal rules.

“We can still maneuver and do things the way we want to do them,” Esochea added. “We’ll take bird baths here. We’re coping. We’re doing our thing together. Everybody is surviving. I mean, sometimes, people just don’t want to go inside those places. We can be ourselves out here.”

The city recently opened up the Gier Community Center for temporary housing — complete with showers and individual beds — for up to 49 guests. About 20 of those spaces still remain available, officials said, but many at the affectionately named “Our Town” camp won’t leave.

And when hundreds in Lansing only get warned for clear violations of executive orders on social distancing, many have wondered why city officials would choose to aggressively enforce the fires. The seemingly inconsistent enforcement from the city have caused some to raise their eyebrows.

“We’re in a pandemic right now,” said City Councilman Brandon Betz. “These people really need our help. They need to be able to have a fire to stay warm. In this particular case, I really think this was inappropriate. Homeless people are people. We need to treat them like that first.”

Betz also voiced concerns about the virus potentially spreading into an otherwise isolated homeless camp by a crew of firefighters that failed to wear appropriate protective equipment. Fire Chief Mike Mackey said his personnel will likely be wearing masks if they need to return.

In responding to criticism on the matter, Schor also pointed to the hundreds of thousands of dollars — about $1.7 million annually — that flows from the city’s “Basic Human Needs”  fund. Much of that goes toward rehousing and various homelessness relief efforts, officials explained.

Still, LFD “has the responsibility to respond to calls” about unpermitted fires, Schor added.

“The only direction I have given on burn permits is that we will suspend issuances of new ones during this emergency,” Schor told City Pulse today. “If someone complained about a fire and the Fire Department responded, that is protocol. This morning was the first I heard about it.”

City Pulse needs your support now more than ever. Advertising — almost all our revenue —  has fallen sharply because of closures due to the coronavirus. Our staff is working seven days a week to help keep you informed. Please do what you can at this time to contribute to the City Pulse Fund. All donations are tax-deductible.