Battle over lockdown authority in Michigan heads to court 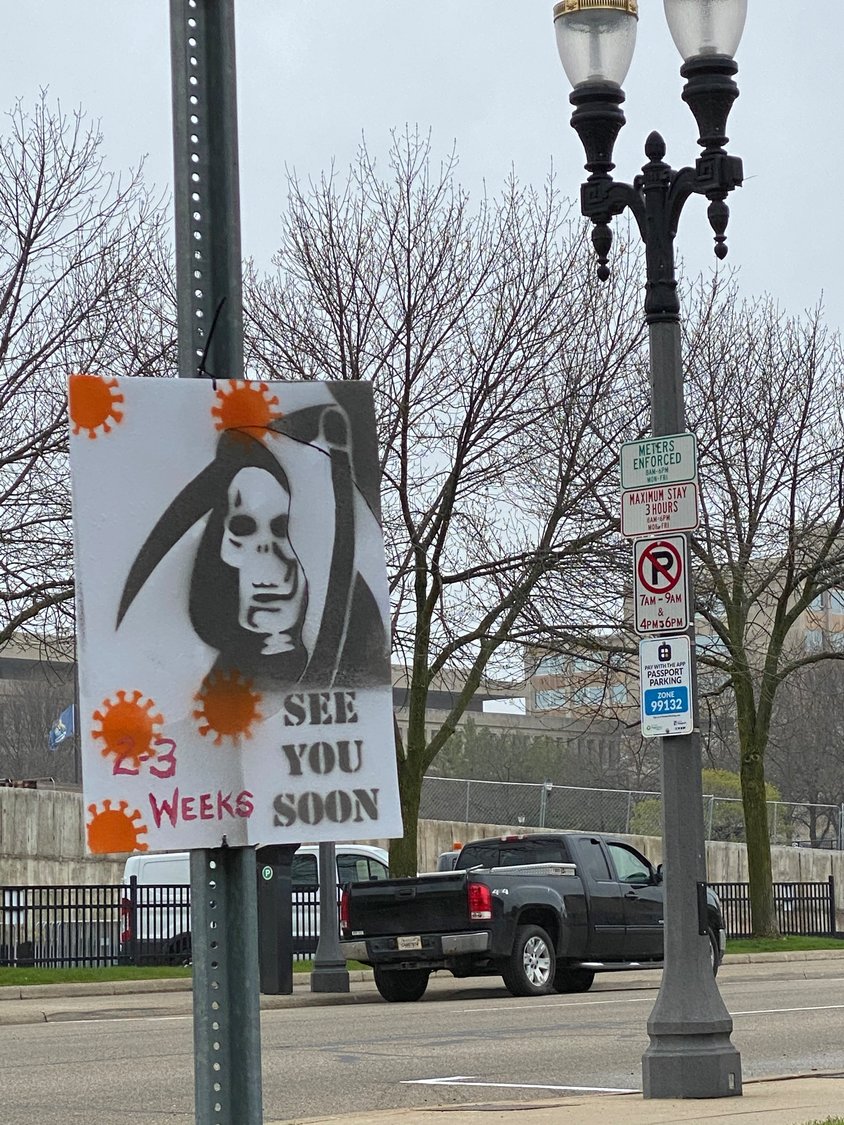 A sign today by the Capitol at Seymour and Ottawa streets that awaited the anti-shutdown protesters.
Caleb Woloszyn-Duffy/City Pulse
Posted Thursday, May 14, 2020 5:16 pm
Kyle Kaminski

Editor’s Note: City Pulse needs your support more than ever. Advertising — almost all our revenue — has fallen sharply because of coronavirus-related closures. Our staff is working around the clock to keep you informed. Please do what you can to contribute to the City Pulse Fund. All donations are tax-deductible.

THURSDAY May 14 — Michigan’s Republican-led Legislature is attempting to “build a constitutional crisis atop a public health crisis” by challenging Whitmer’s emergency authority during the coronavirus pandemic, her attorneys said Tuesday in a court filing, according to recent reports from Bridge Magazine.

Whitmer is asking Court of Claims Judge Cynthia Stephens to reject a lawsuit from the Legislature, which alleges Whitmer violated state law and the state Constitution by issuing new emergency declarations after the GOP majority had refused to extend the declared emergency.

Legislative leaders are asking the court to declare Whitmer’s executive orders, including her stay-at-home and business closure mandates, “invalid and unenforceable,” Bridge reports.

Others have argued — including many Democrats — that another state law allows Whitmer to extend the emergency declaration on her own accord, leaving an opportunity for more emergency action, like Michigan’s extended lockdown order, until the governor says otherwise.

The matter will begin in the Court of Claims tomorrow morning, but it likely will eventually find its way to the state Supreme Court. Meanwhile, state law enforcement officials are being asked to enforce the executive orders as valid law, though they haven’t always followed that request.

In a statement issued yesterda, the Prosecuting Attorneys Association of Michigan acknowledged the looming legal challenge to Whitmer’s authority but clarified that all of her orders issued to date “are still in force” until a judge rules otherwise in a courtroom.

Attorneys for Whitmer have argued that the recent lawsuit is nothing more than a “power grab cloaked in the fineries of unfounded legal reasoning,” reports Bridge Magazine. The governor acted within her authority to curb the virus’ spread and to save “countless lives,” attorneys said.

Oral arguments will be heard in the Michigan House of Representatives at 10 a.m. tomorrow. Check back with City Pulse for continued coverage.

A rain-soaked rally at the State Capitol garnered a much smaller crowd than at recent protests today as a fringe group and their supporters pushed back against executive orders in Michigan.

Today’s rally saw nearly as many police officers and news reporters as demonstrators, but local and state officials for weeks had still braced for potential violence and other chaos downtown. Organizers had previously billed the underwhelming show as “Judgement Day” in Michigan.

Neither chamber of the Legislature met this morning. Still, some speakers shouted at the closed Capitol, calling for Whitmer to come out from the mostly empty building

The Detroit News reports that a brief skirmish occurred when some protesters objected to another demonstrator’s display of a doll with a noose around its neck, along with an American flag. Eventually, the rain continued to pick up and many left the scene without further incident.

McLaren Health Care has been awarded $626,328 in funding for expanded telehealth services from the Federal Communications Commission’s COVID-19 telehealth program. McLaren was one of 30 health care providers nationwide to receive the special funding allocation this week.

The program provides immediate support to eligible health care providers responding to the pandemic by fully funding their telehealth platform services and equipment necessary to provide critical connected care services. As a result, 12 of McLaren’s hospitals — including the one in downtown Lansing — will further enhance their telehealth efforts between doctors and patients.

Ingham County Health Officer Linda Vail is warning local residents that blood tests designed to look for antibodies to the coronavirus are not yet reliable or practical for the general public — despite their increasing availability at clinics and other facilities across the state.

Vail said the general lack of testing reliability and uncertainty regarding the immunity response to COVID-19 make it likely that the tests will give a false impression of vulnerability to the virus.

“It would be tremendous if we could all know for sure if we were at risk for or safe from COVID-19, but the truth is that we cannot definitively give people this information,” Vail said. “There needs to be more research before we can truly interpret the results of these tests.”

Michigan families hit hard by the financial and health-related impacts of COVID-19 will benefit from a $450,000 Consumers Energy Foundation grant to eight community action agencies working to meet the emergency needs of low- and moderate-income residents in 43 counties.

The grant will support agencies trying to keep up with assistance requests amid the pandemic.

Attorney General Dana Nessel issued a consumer alert today to ensure residents who are unemployed due to COVID-19 and qualify for the Federal Communications Commission’s Lifeline program are aware of a simplified application process. Low-income subscribers can apply for discounts on monthly telephone, broadband internet and other bundled utility services.

The Detroit News reports that more than 110,000 lower-income residents have enrolled in Michigan’s Medicaid health program over the last two months, adding pressure to a state budget that is expected to be short by $1 billion to $3 billion in the current fiscal year.

Michigan’s general fund is expected to face a $2.7 billion shortfall during the current fiscal year because of the economic shutdown attributed to the pandemic, the Detroit Free Press reports. The latest forecast also shows a $1.1 billion deficit in the school aid fund, which could put pressure on lawmakers to make cuts to the per-pupil base spending level for each student.

At least 22 cases of COVID-19 across Greater Lansing and one virus-related death in Ingham County were reported by state officials today. The regional death toll stands at 35 with at least 909 confirmed cases reported across Ingham, Eaton and Clinton counties in recent months.

Michigan tracked at least another 1,191 coronavirus statewide cases this afternoon with another 73 virus-related deaths, edging up the case count to nearly 50,000 with almost 4,800 deaths.

Today’s statewide case count was significantly higher than daily reports in recent weeks, partially due to an increase in backlogged results being reported into Michigan’s tracking system and increased amount of COVID-19 testing at correctional facilities across the state.

Officials said cases reported from commercial labs working in state prisons and in corporate settings were entered manually, which led to a backlog now being reported electronically. At least 35 deaths were also identified in a vital records review of backlogged death certificates.

The Mid-Michigan County Health Department does not report recovery statistics.

Ingham County Prosecutor Carol Siemon doesn’t mince words on enforcing a 1931 felony law outlawing abortion.   “I have said, unilaterally, during my entire legal career I will not …