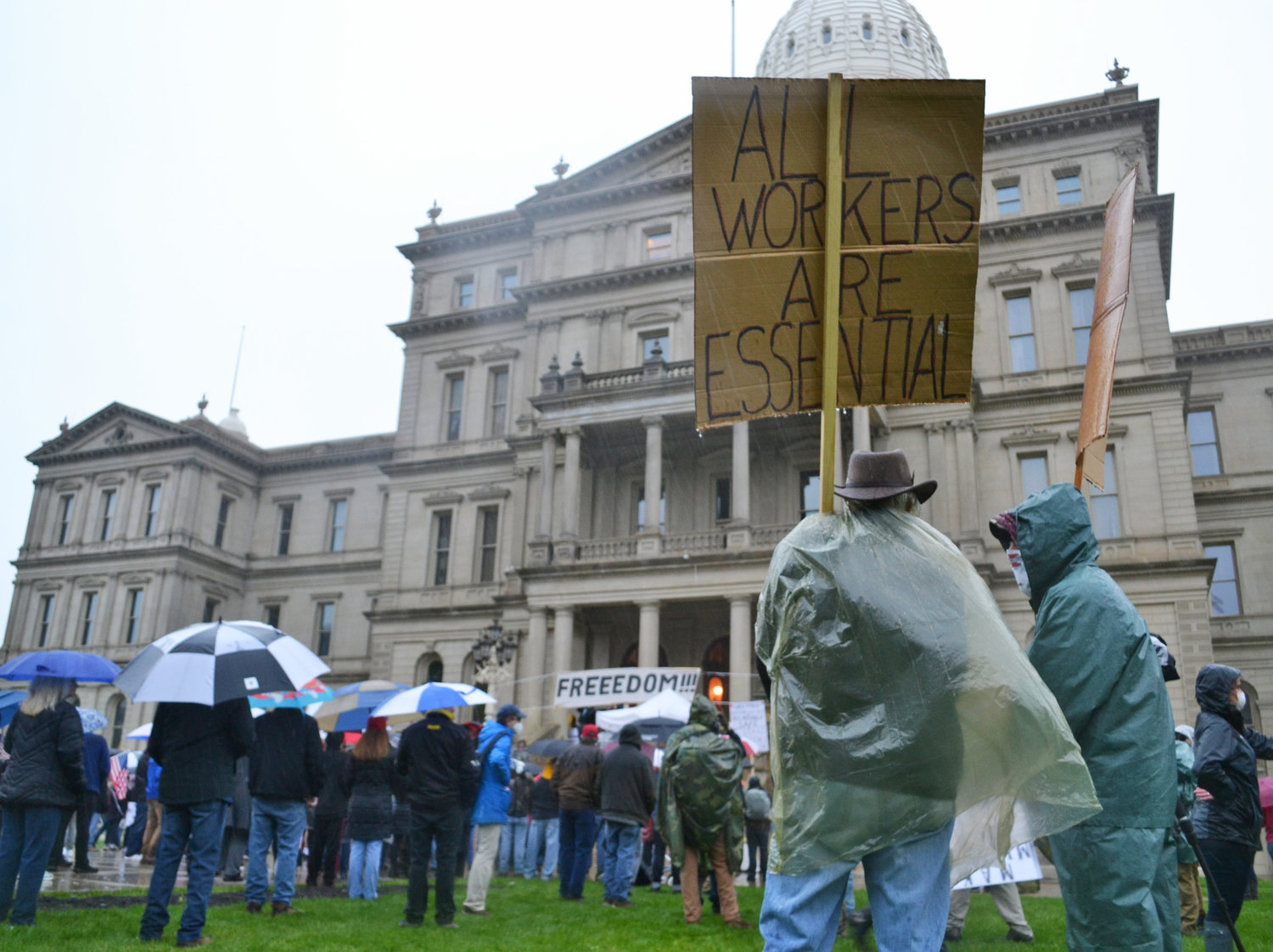 A protester in the rain carrying a sign reading, "All workers are essential."
Skyler Ashley/City Pulse 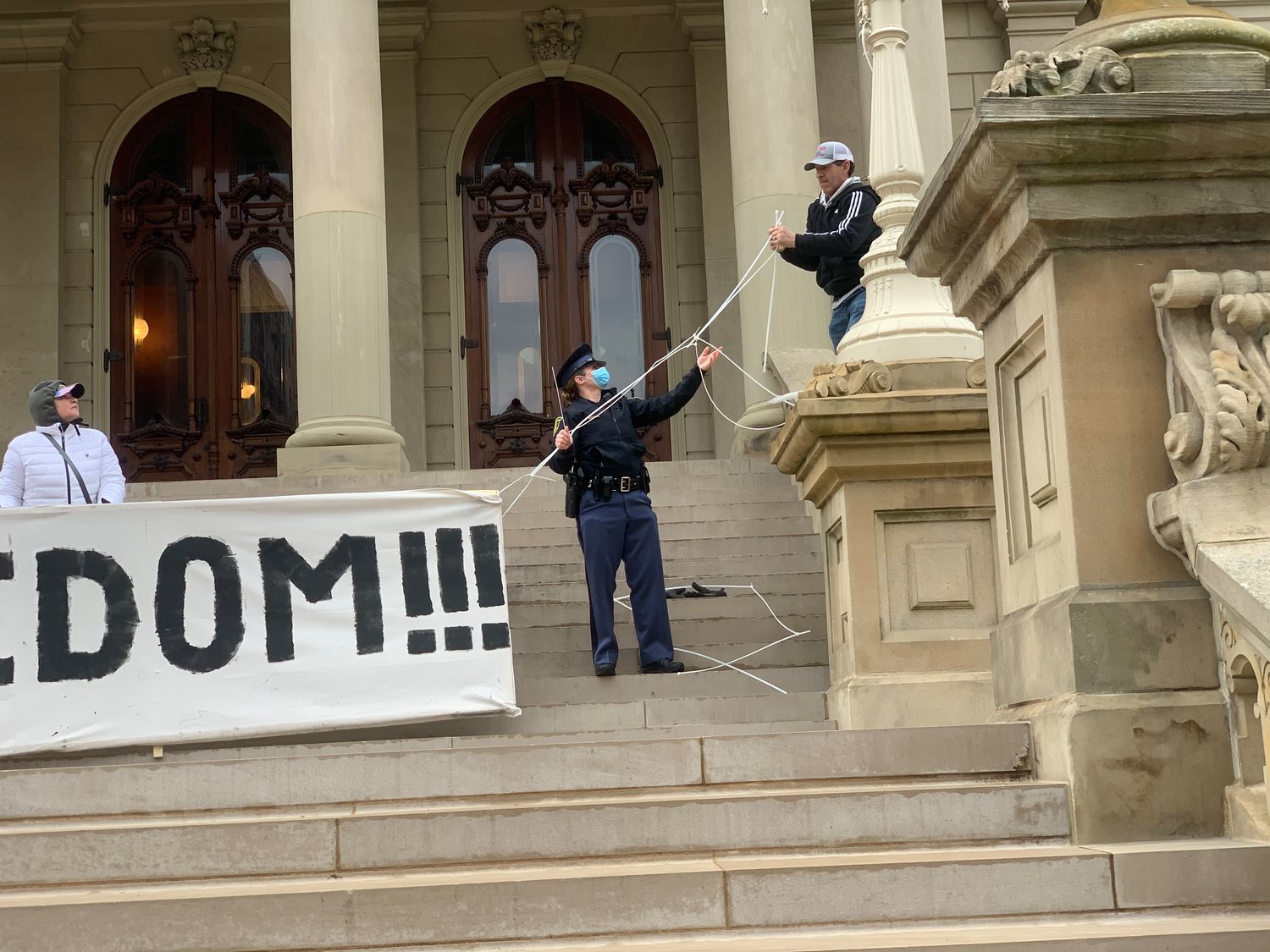 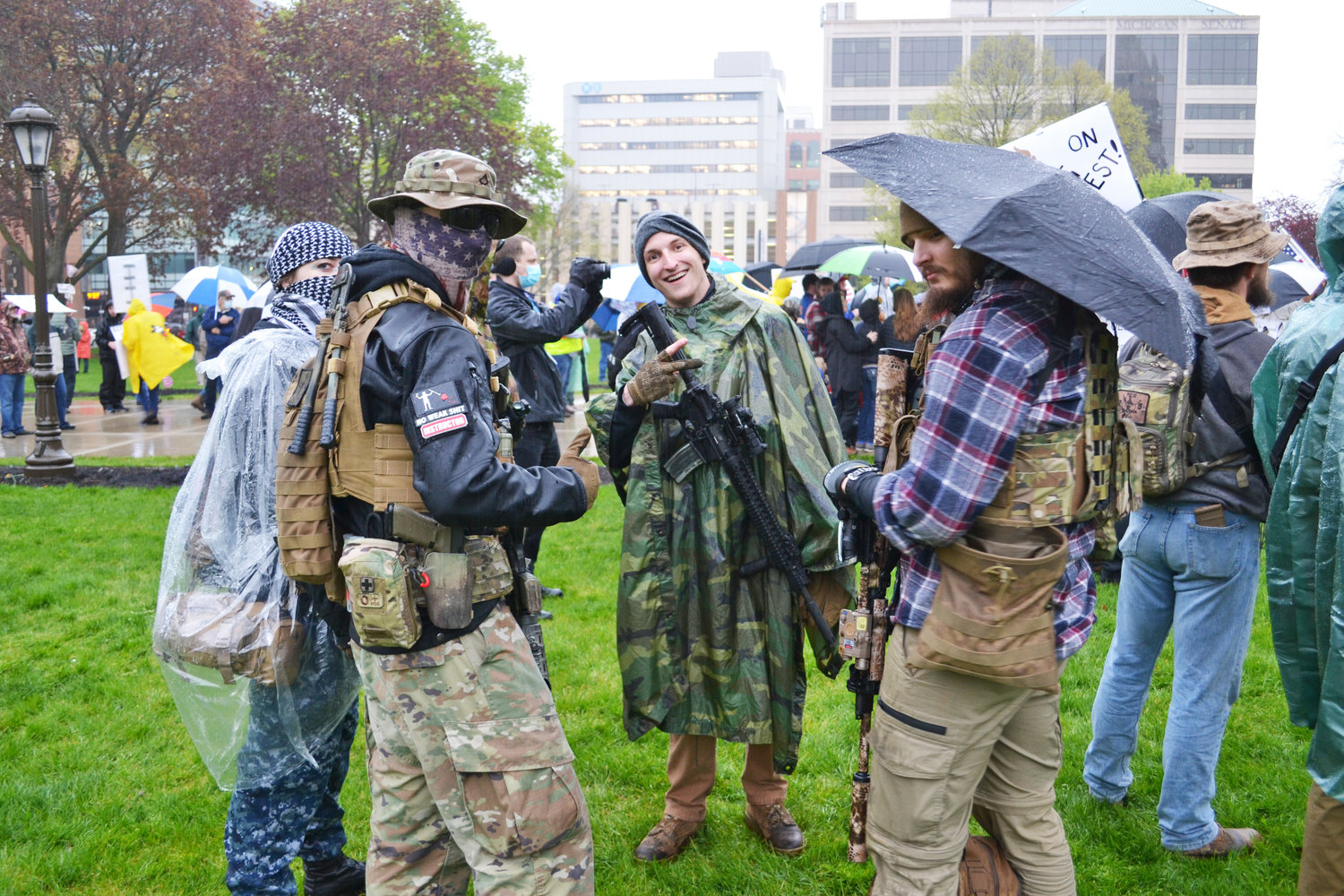 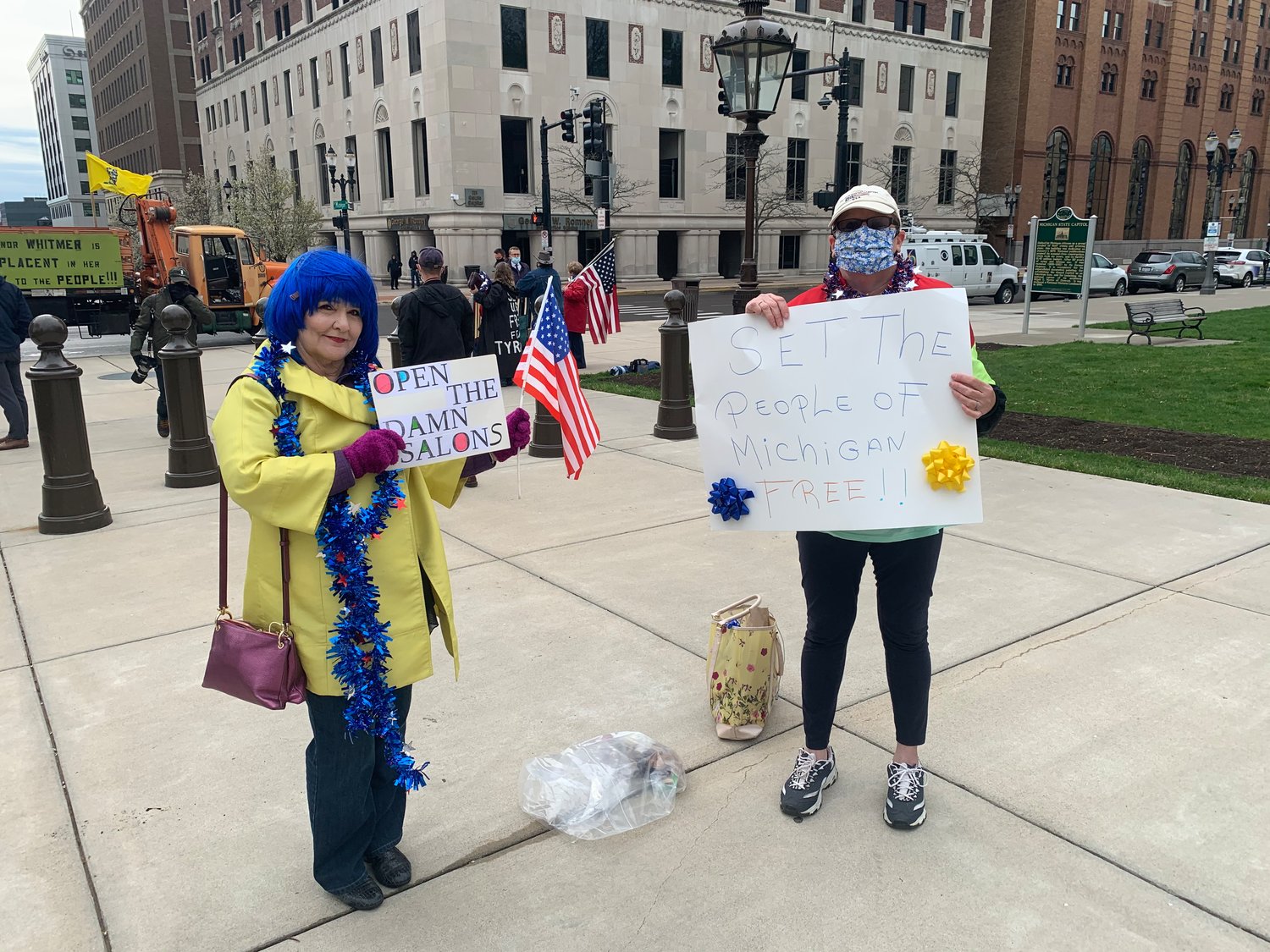 Protesters with signs pleading for salons to reopen and for the people of Michigan to be "set free."
Kyle Kaminski/City Pulse 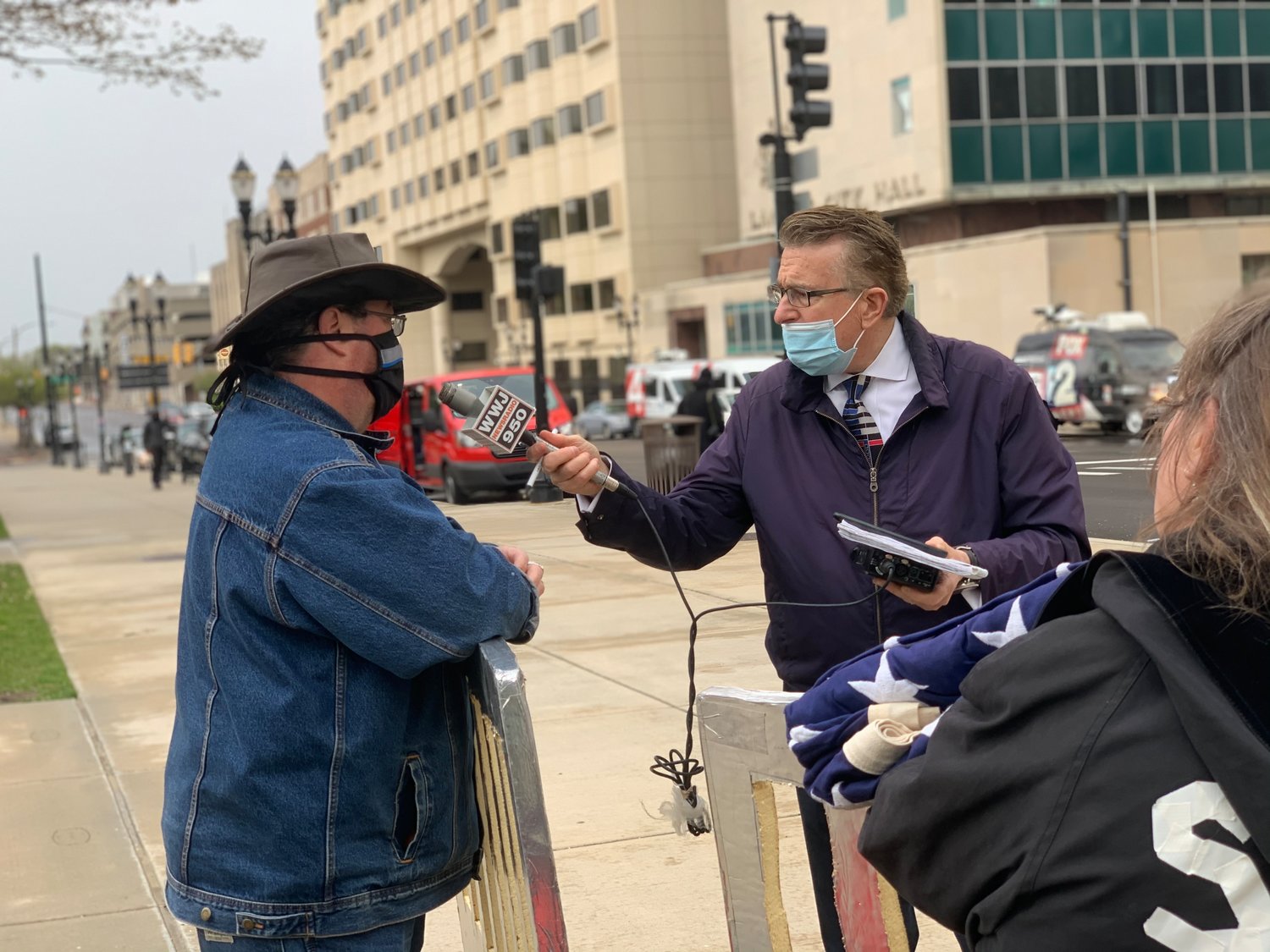 A WWJ Newsradio 950 reporter conducts an interview with his mask below his nose.
Kyle Kaminski/City Pulse 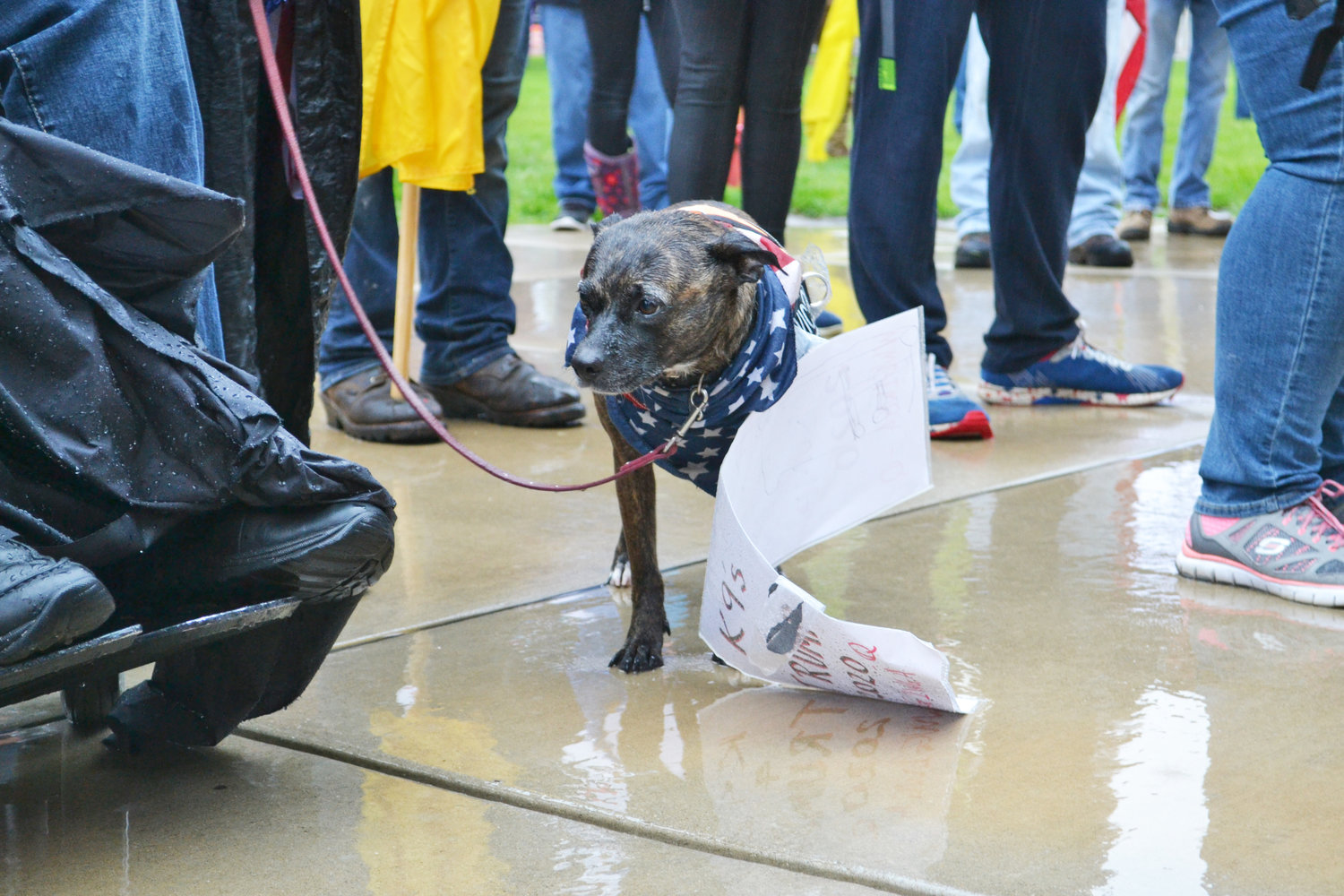 A protester's dog stands in the downpour at the Capitol.
Skyler Ashley/City Pulse 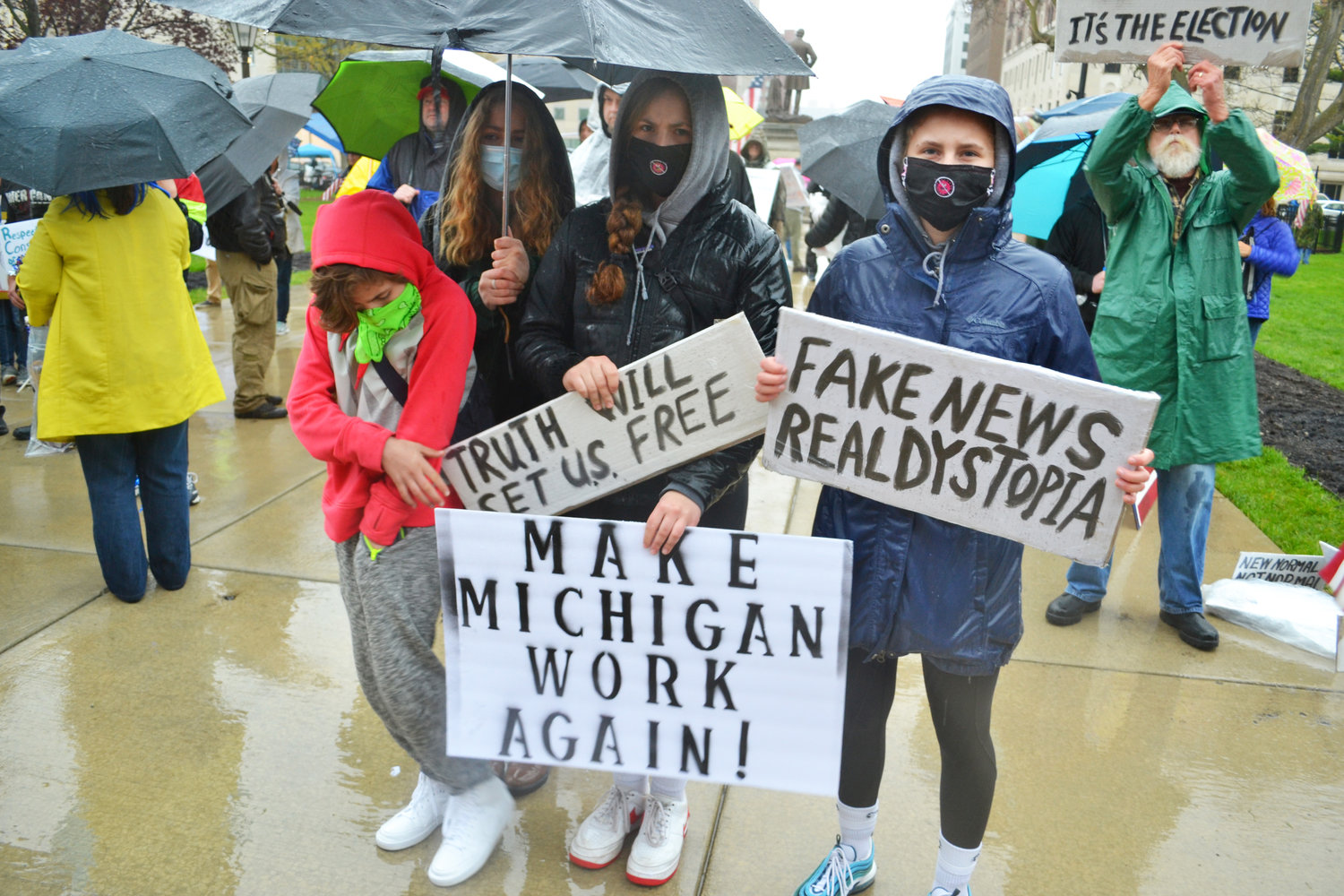 THURSDAY, May 14  — A rain-soaked rally at the Michigan State Capitol building garnered a much smaller crowd than at recent protests today as a fringe group and their supporters pushed back against Gov. Gretchen Whitmer’s executive orders in Michigan.

Michigan United for Liberty founder Jennifer Darling — an anti-vaxxer and leader of Ann Arbor for Medical Freedom — spoke from a makeshift stage on the Capitol steps, at first blaming the smaller turnout on weather and road construction delays before speaking out against Whitmer.

She was also joined by a woman named Angie, who identified herself only as a former Lansing Police Department officer. Following executive orders closing nonessential businesses, she called for Whitmer to be jailed and for state lawmakers to proceed with a vote of no confidence.

Angie also doubted the severity of the coronavirus in Michigan, calling Whitmer and other state officials’ “bullshit bluff” and asking them to show her “the bodies” of the dead. A few dozen protesters chanted a familiar “lock her up” chant, followed later by repeated shouts of “USA.”

Today’s rally saw nearly as many police officers and news reporters as demonstrators, but local and state officials for weeks had still braced for potential violence and other chaos downtown. Organizers had previously billed the underwhelming show as “Judgement Day” in Michigan.

Neither chamber of the state Legislature held a session this morning. Still, some speakers shouted at the closed Capitol, calling for Whitmer to come out from the mostly empty building.

Donna Jones, a medical worker at a nursing home in southeast Michigan, drove in from Canton to protest Whitmer’s “extreme” measures to prevent the spread of COVID-19 in Michigan. She contends that social distancing and wearing a mask has done nothing to stop the virus’ spread.

And while she carried three masks in her pocket, she wasn’t wearing one on the lawn today.

“I believe in freedom. We can’t go to church no more, and I’m very religious. This is like a socialist country now. This is not who we are. Our forefathers fought for this nation. This is just insanity,” Jones explained. “Distancing yourself? You really have to build up your immune system to be around other people. This is insane. It’s just not what our country was founded on.”

Whitmer’s executive orders restrict public or private gatherings but specifically exempt religious services from those restrictions. Many churches have opted to move to virtual services anyway.

The orders also require residents who can “medically tolerate” wearing at least a homemade face covering to do so in enclosed spaces. The restrictions also mandate that employees at grocery and convenience stores, pharmacies and other food establishments wear coverings.

Proven science shows that face coverings can help prevent the spread of the coronavirus.

Dozens of angry Michiganders, however, are still fueled by conspiracy theories and disinformation about the virus, according to recent reports in the Detroit Metro Times. Some of today’s protesters appeared to be no exception to the trend. Misinformation was abound.

Christine Wofford, who wore a blue wig to today’s demonstration, just wants to go back to the salon. Whitmer’s orders prohibit gyms, salons, barbershops and other services that center on physical contact and shared indoor spaces from reopening amid the pandemic.

“We are here because we want her to open the businesses,” Wofford said. “Open the damn salons, seriously. I need my hair done. It’s just, there’s no reason for it. They can social distance. They can have a few people in at a time and space people out. She’s being mean.”

Like “Operation Gridlock” and another recent rally last month, many protesters today weren’t wearing face coverings and had refused to maintain a six-foot social distance from one another. And while there was an increased police presence, several cops watched from a distance.

Before the rally formed, at least one Michigan State Police officer helped demonstrators to hang a large “Freeedom!!!” sign from the State Capitol steps. She quickly left the scene after a City Pulse reporter began filming her holding the banner. “They’re on our side,” one protester said.

The Detroit Free Press estimated that 200 to 400 people would take part in today’s rally. Past State Capitol demonstrations have attracted thousands. City Pulse counted at least 150 people. Regardless, both local and state law enforcement officials had geared up for potential chaos.

Attorney General Dana Nessel and Michigan State Police Col. Joe Gasper had reminded residents that public safety would be a priority today and that state laws — including executive orders on social distancing — would be enforced. A Lansing Police Department officer was helping to clear parked traffic, but social distancing was largely ignored again this morning.

Several Michigan State Police officers were spotted doing nothing as a tight crowd formed in front of the building earlier this morning. They watched on as some stood shoulder to shoulder.

Nessel also voiced concerns yesterday about the potential for heavily armed protesters arriving at the Capitol this morning, noting it unnecessarily “creates a powder keg dynamic that is dangerous to protesters, law enforcement and public servants reporting to work at the Capitol.”

Only a handful of protesters were seen carrying rifles today. Nessel’s message must have stuck.