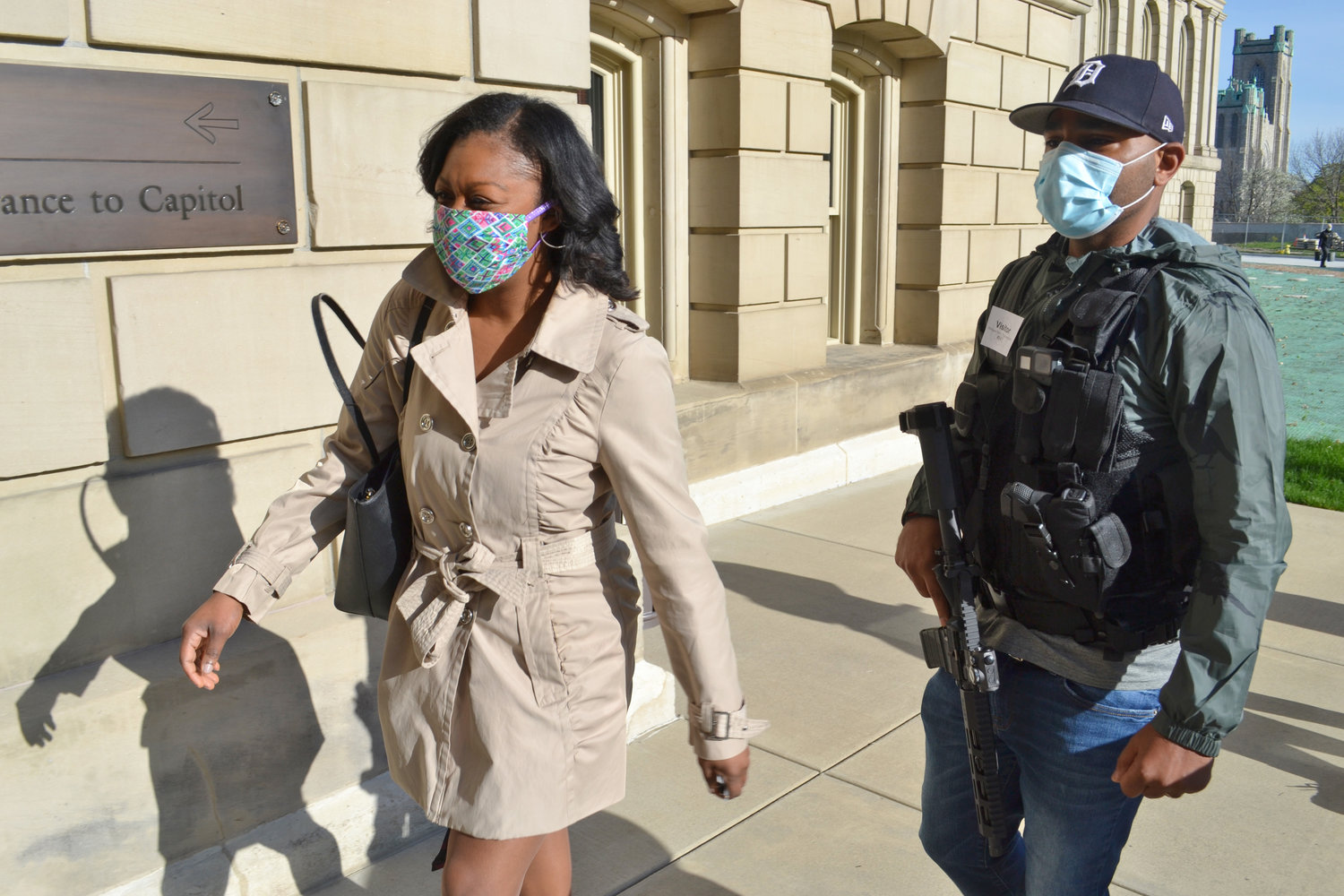 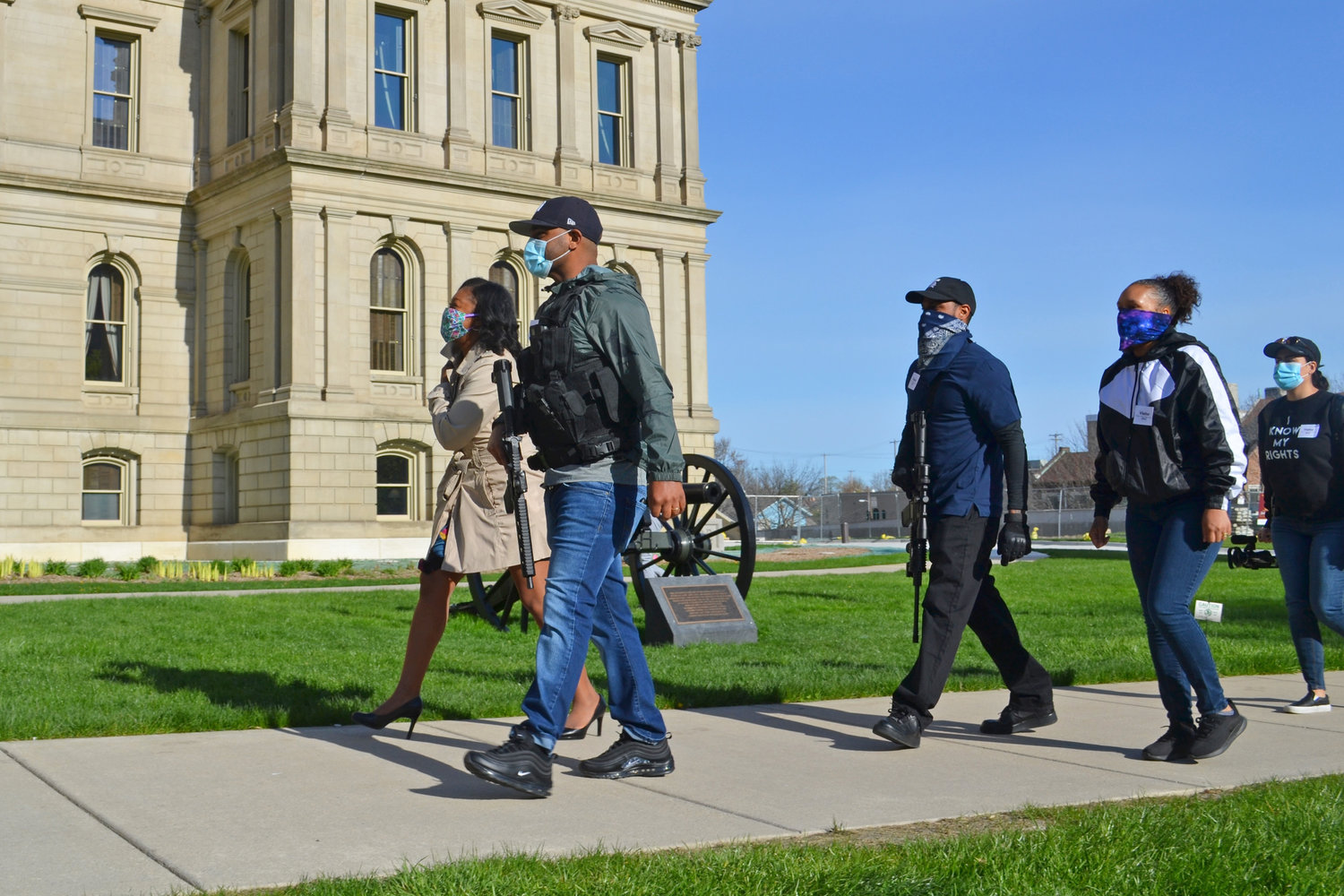 WEDNESDAY, May 6 — After a horde of armed and angry protesters swarmed Lansing last week, State Rep. Sarah Anthony brought some extra protection on her way to the State Capitol today.

At least three African Americans carrying large rifles escorted Anthony across Capitol Avenue earlier this morning so she could safely attend committee meetings without fear of intimidation. She said she didn’t necessarily request the help, but welcomed the extra security nonetheless.

“We were all just appalled by the lack of support and lack of security that I had, that other legislators had, and the fact that a lot of the demonstrators last week were adorning many racist, anti-Semitic signage. I think it just triggered a lot of folks, especially African Americans.”

Anthony and other lawmakers met this morning for an appropriations committee meeting. The scene was quiet. Anthony’s cadre of Second Amendment advocates had no trouble entering the building. They left to quietly stand on the front steps after Anthony made it inside an elevator.

“We want to change the narrative, first of all. We want people to understand that people of color can come out here with guns just the same as anybody else can,” said Michael Lynn Jr., a black Lansing firefighter and community activist who helped organize Anthony’s security detail.

Lynn watched a video that Anthony posted to Facebook as the protest formed last week. In it, she looked on from her office across the street as protestors slowly crowded the Capitol Lawn carrying Confederate flags, Nazi symbolism, nooses and other blatantly racist forms of imagery.

After some demonstrators eventually made it inside the building last week, one maskless and gun-toting protester got so close to Anthony’s face that she could smell his breath. And lawmakers shouldn’t be scared to come into work because of armed intimidation, she said.

“The majority of the protesters were white,” Anthony said. “I’m still not exactly sure on the connection between confederate flags and Nazi symbolism. They just had no connection to the stay-at-home orders. The fact they were carrying guns openly while we voted was unnerving.”

Anthony’s concerns are largely based on a “complete failure” of the Michigan State Police to maintain adequate security, she explained. She didn’t find out until this week that police could have escorted her to her car after she left the Capitol. No other security measures were mentioned.

“It was just unnerving to me as a woman and as a person,” Anthony said, noting that Capitol sergeants otherwise do an adequate job keeping lawmakers inside safe. “These community volunteers today won’t be needed all the time, but they wanted to have a presence today.”

Because Lynn is black, he suspects that cops would’ve been a bit more cautious — and perhaps violent — had his group been as boisterous as some of the crowds last week. He wanted to prove a point that Second Amendment rights aren’t limited on the basis of race.

“I could hear the fear in her voice during that protest,” Lynn explained. “It was the visual of her being that scared to go to work. It meant we had to do something. We came out here today to make sure we could provide some protection, even if it’s only just to make her feel better.”

Meanwhile, the Michigan Capitol Commission is exploring whether guns should be banned inside the Capitol, according to the Detroit Free Press. The long-standing practice of allowing open carry inside the building came under national scrutiny after last week’s demonstrations.

Some lawmakers wore bulletproof vests as protesters eventually made their way inside the gallery. Even some Republican lawmakers — like Senate Majority Leader Mike Shirkey — chided the protesters. Shirkey said a few acted like “jackasses” last Thursday afternoon.

It’s still unclear whether the commission has the authority to restrict firearms inside the building or whether that would mandate an adjustment to state law. Regardless, the issue is an electric one. The Second Amendment can’t be easily infringed without the possibility of violent backlash.

And despite the contradictory nature of today’s armed escort, both Anthony and Lynn are vehemently opposed to allowing open carry inside the Capitol. They’re just exercising their rights as they stand and ensuring an even playing field for everyone to get involved, they said.

“There are certain things that are just inappropriate,” Lynn added. “We don’t take guns in the courthouse. We don’t take guns into city hall. Why would we take guns of this caliber into the Capitol? I have 150 rounds on me right now. I could make terror. This could wreak havoc.”

Lynn said he’d have no qualms should rules or laws eventually prohibit guns inside the Capitol. Until then, it’s his right. Anthony supports a complete ban on firearms inside the Capitol outside of law enforcement. At the very least, only concealed carry should be allowable, she explained.

“I will be advocating for a change, at the very least, to ban open carry inside the building. For one, it’s more intimidating. Obviously, we have a right to bear arms, but concealed would be easier. I don’t think we need to be intimidated with large firearms while we’re doing our jobs.”