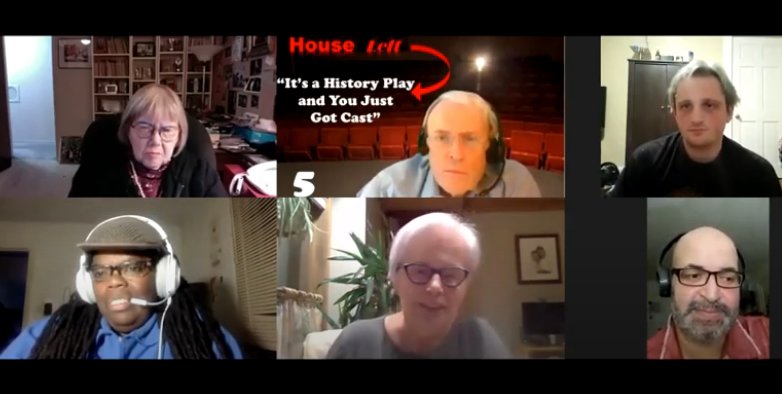 Lansing theater stalwart Doak Bloss said he hasn’t experienced anything like the coronavirus pandemic in his several decades’ long career that has seen him act in countless productions.

“The only thing in my life that compares is the impact of the AIDS epidemic, which cost us a number of people on the national and local stage,” Bloss said. “It is like having a major part of your life just ripped away.”

While many actors and actresses are sidelined thanks to the pandemic, which has disrupted performances and upended many group’s entire seasons, Bloss is helping keep the theater community stimulated with his new YouTube interview series, “House Left.” The series features Bloss and a rotating panel of guests plucked from the Lansing theater scene. Bloss sets a topic of discussion and the panel goes off — revealing fascinating viewpoints on theater’s role in socially and politically tumultuous times.

“It seemed like a nice way to emulate the phenomenon of a cast of people of different ages and backgrounds talking together — like you do after a rehearsal or in a green room,” Bloss said.

Bloss said he was not interested in hosting one-on-one interviews. He believes the roundtable format is more conducive with the very idea of theater and is more representative of the energy formed between a production’s cast and its audience.

One of the most fascinating episodes recorded of “House Left,” so far, is the fifth episode, which features Mary Job, Rose Jangmi Cooper, Connor Kelly, Leanore Helder and Jeffrey Wilson. The panel discussed a hypothetical production that tackles the cultural tension that has defined 2020. Bloss believes that when theater can return to some form of normalcy, productions that tackle tough questions will draw more interest than escapist entertainment.

“Participants in my dialogues have said, ‘When we do get back, I have no interest in doing flakey entertainment shows. I want to do something that relates to what we are experiencing now,’” Bloss said. “I really think that will provoke new avenues of creativity. I think an audience will be there, and hopefully, it will be an even larger one than in the past.”

Bloss plans for future episodes of “House Left” to continue to feature diverse panels and further address challenging subjects. One idea Bloss is currently developing focuses on discussions with devout Christians and how they see themselves fitting into a creative industry that is often highly critical of Christian society. Bloss also wants to produce an episode that features only African-American women panelists to discuss racial inequity.

“I think their perspective is really important right now. For that one, I think I would take myself off the screen, so they can have a conversation without a white guy sitting in the middle of it,” Bloss said.