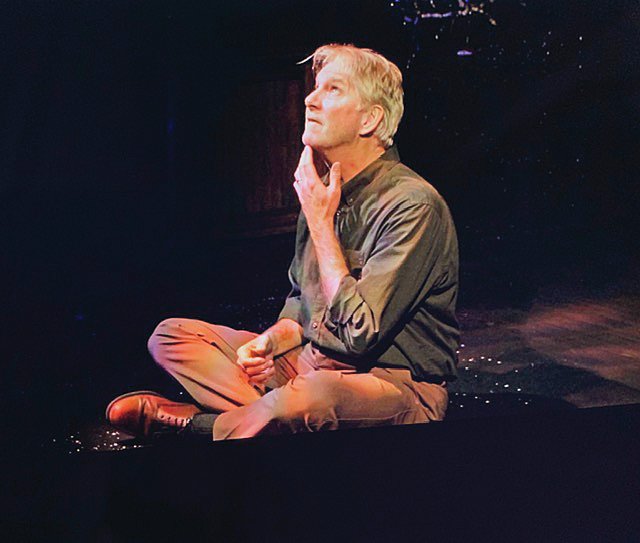 As the sole cast member in the Steve Murray play based on the beloved “It’s a Wonderful Life” movie, Lepard mimics the speech and mannerisms of Stewart’s character, George Bailey. He also shifts into memorable characters like Reed’s Mary Hatch, Barrymore’s Mr. Potter and Bondi’s Mrs. Bailey.

Lepard skillfully portrays all the principals from the 1946 Christmas classic. He cleverly brings Uncle Billy, Bert, Ernie, Violet, Clarence — and many more — to life in a 75-minute retelling of the story.

With no costumes, minimal props, and a simple set, Lepard masterfully shifts quickly between roles. His facial expressions, gestures and physicality are enough to nail the images and personalities of very different characters at a breakneck speed.

The ease, clarity and consistency of Lepard’s transformations are fascinating to watch. He has an impressive ability to duplicate the multiple voices of conversations from the Frank Capra movie. Occasional recorded character voices that sound like actual movie clips are all Lepard.

With humor and seemingly off-the-cuff remarks, Lepard keeps us engaged and interested in a well-known tale of a good-hearted man on the brink of suicide who has a miraculous intervention. Quips directed to the nearly 50 in attendance on opening night broke the fourth wall and drew us into the show even more.

Special lighting by Dustin D. Miller and on-point sound effects by Quintessa Gallinat help keep “This Wonderful Life” lively. Throughout the production, our imaginations are stimulated by projections and realistic noises.

Bartley H. Bauer’s set includes the obligatory loose stair post knob, a staircase and moveable desk that Lepard adapts to enact scene after scene from the familiar film.   Despite the physical and voiced demands of the play, Lepard never gets winded.

After marveling at his stamina, when Lepard received a standing ovation after the emotional ending of “This Wonderful Life,” it was I who was breathless.