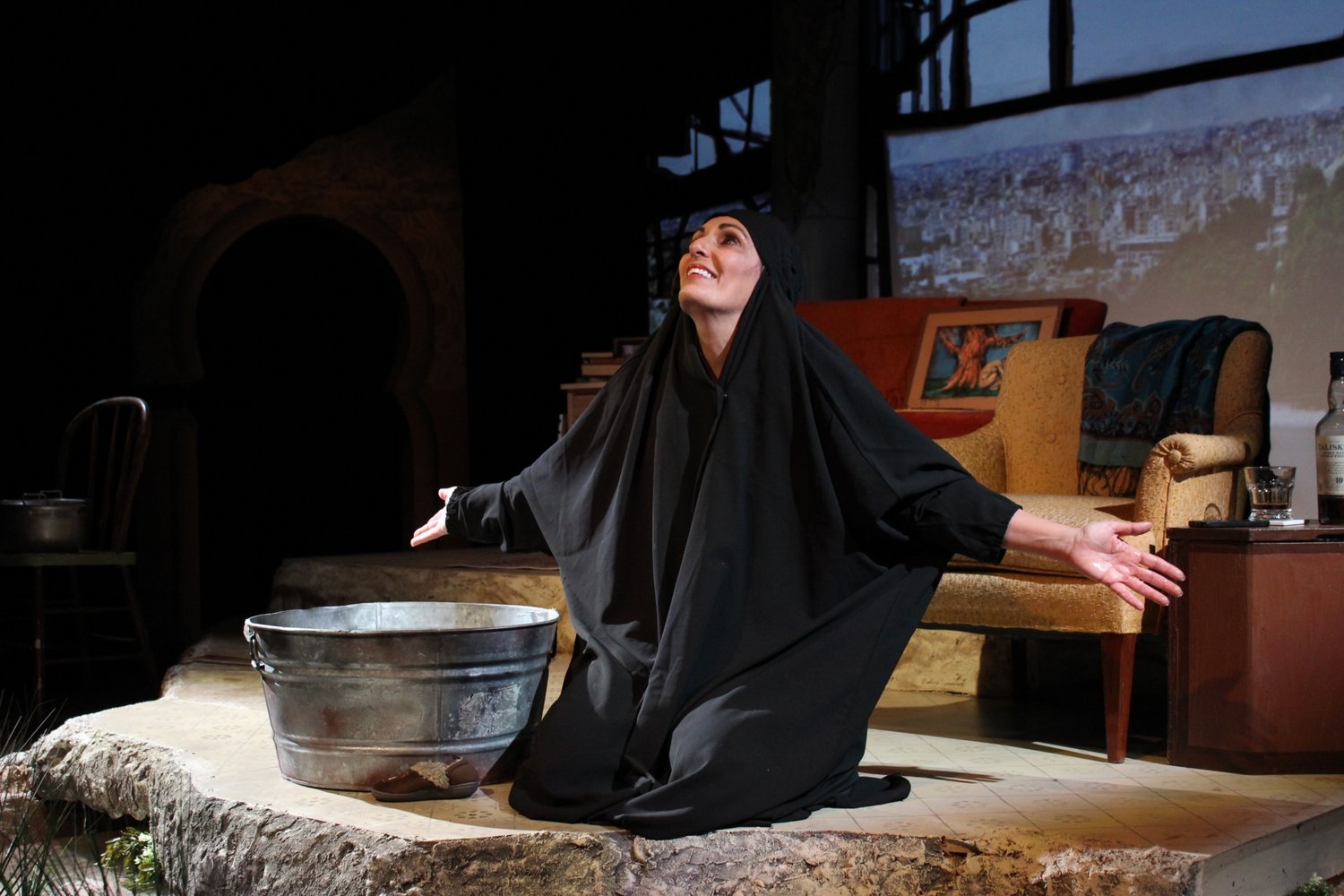 Peace. Freedom. The absence of fear.  A love so strong that you can’t breathe.  Those are some of the female yearnings revealed in “9 Parts of Desire.”

Kamoo’s gripping embodiment of those women is one of many reasons Williamston’s “9 Parts of Desire” deserves to be seen.

Aspiring actors should see it as an example of superb acting.  With minimal costume changes, Kamoo shifts with ease from one character to another in the one-woman show.  Some of the nine we see only once, while others have repeated appearances. With gesture, posture and voice shifts — and with movements of her lithe hands —  Kamoo makes each storyteller significant and distinctive.

A mother who lost her family, a lustful artist, a fatherless kid, a helpless doctor, an exile and others speak from their hearts though Kamoo’s convincing and emotional portrayals.  The varied characters can make us ache, cry, laugh and gasp.

Kamoo and Ed Nahhat’s direction keeps the shifting stories flowing.  Other directors can learn from their abilities to keep the characters distinguishable, and from the clever ways the directors utilize the set.

Set designers should see Williamston’s “9 Parts of Desire” to marvel at the crafty, five-layer set.  Jennifer Maiseloff’s design includes a realistic stone bank with plants, a mosaic floor, up-to-the-ceiling framework, imposing columns and an exquisite, flowing mini-river. Appropriate and detailed props by Michelle Raymond — some that can be used only once — help create the perceptions of locations that include Baghdad, London and Michigan.

Theater media designers should see the about-90-minute play to witness the striking projections created by Quinn Legge.  Images of a sprawling city are coupled with landscape scenes.  Sometimes only one or the other is highlighted and sometimes, the vast background is neutral.

But, the primary reason “9 Parts of Desire” is a must-see is because of how eye-opening it can be.  The-with-Okemos-roots Raffo spent at least 10 years researching Iraqi history and interviewing people who the characters are based on.  The sometimes-shocking narratives Kamoo so skillfully delivers aren’t the kind of stories Americans usually get to hear.

In “9 Parts of Desire,” first-hand accounts of Sadam Husain’s cruelties, especially towards women, are described in detail.  A mother speaks of his horrific torture techniques.  A child bemoans her restricted life and the loss of her father—a man who was taken away because he spoke casually in a manner that displeased Sadam.

In the illuminating play, a doctor laments her hopelessness treating patients, often children, with cancer and deformities caused by byproducts of war.  A guide gives a tour of a gruesome tomb of civilians that include her family — a tragedy caused by experimental American bombs.  An artist questions why her non-military home was shelled.

How once close and united Iraqi families had to scatter, and how a thriving middle class was destroyed because of American wars, are themes of “9 Parts of Desire.” The first-hand accounts from feminine perspectives never seem political or agenda-based.

The play is a stark and authentic reminder of the consequences of war.  Although “9 Parts of Desire” is not for kids or the squeamish, the compelling play is an extraordinarily presented history lesson that should not be missed.

Tickets are available online at  tickets.williamstontheatre.org, or by calling the box office at  (517) 655-7469, Tuesday-Friday, noon to 6 p.m. Proof of full vaccination and photo ID is required for admittance. To request socially distanced seating, call the box office. Masks are required in the theater.