'Whoever's doing it, they're crazy'

After 20 years, Snake Rodeo slithers from Old Town to the east side 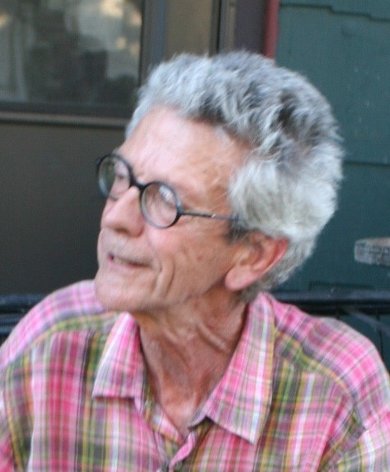 Correction: Because of a reporting error, this story originally got Jack Bergeron's title wrong. He is a former administrator at LCC.

After 20 years in the underbrush, Lansings Snake Rodeo has re-emerged like a well-camouflaged Asian vine snake. A leaderless, nameless group of artists and musicians is out to revive the anything-goes, no-rules art scene crowded out of North Lansing — now Old Town — by pear-scented boutiques and gifty galleries .

But what, exactly, is going to happen, and what are the guidelines for artists who are interested?

“I’m a fucking anarchist. I’m not gonna make rules,” 60-ish Rodeo co-instigator Charlie Nash said, with a glorious, gap-toothed grin. “I lost my expectations when I lost my virginity. It would be great if a lot of people come. If nobody comes, that’s cool, too.”

While thus philosophizing, Nash rummaged through the garage at Hum House, mulling whether to clear it for extra exhibit space.

“I guess it depends on whether people move their shit,” he said.

Marty Koenig, another East Side artist, was more in the mood for a proper manifesto. He called the revived Snake Rodeo a “celebration,” but his take on the event is colored by nostalgia for North Lansing, “before the beer tents, before the brick condos.”

“Before gentrification, North Town was cheap studio spaces for artists in a seedy side of town,” Koenig said. “With the ‘clean up,’ much of that culture was lost.”

“The snake is a symbol of transformation,” Terry said. “It was just something fun and different to do. It gave us focus.”

Snake Rodeo lasted until the mid-‘90s. That energy evolved into the original, punk-rocky Oktoberfest and gradually focused into paunchy respectability with BluesFest, JazzFest and other tourist brochure-friendly events.

Nash has lived on the east side, on and off, for 27 years. He finds the spirit of North Lansing, before the lawyers and lavender soap, alive and well there. “There’s always been house shows,” he said. “There’s always been an underground.” Four drummers live within a block and a half of Hum House.

Then and now, music is integral to Snake Rodeo. Nash’s favorite memory of the North Lansing version was hearing five bands at once.

“It was like what John Cage talks about: music circus,” he grinned, invoking the pioneer composer and theorist of chance music. “There was one in the alley, one in Turner Park, two playing in other spaces, and then we started playing.”

Nash has traveled a lot and lives light, but he recently decided to settle in Lansing and quietly garden his own nook of anarchy.

He wanted to do more than the average eastside house show when he realized that 2013 is the Year of the Snake in the Chinese Zodiac. Talk about a cosmic hint.

The new Snake Rodeo is more than an anarchic belch of nostalgia from North Lansing art veterans. Artist Augusta Rose, who recently graduated from MSU with degrees in art and art education, moved to Lansing a year ago. She heads Lansing ArtWorks, a grass-roots group linking East Lansing artists with MSU students. She hooked up with Nash’s informal Snake Rodeo group this year.

Across a generation, Rose and Nash hit it off. They played music together at eastside house shows. One of Rose’s prints quotes German philosopher Rudolf Steiner: “Bourgeois art is never art.” Another print is about the jailed Russian rock group Pussy Riot.

“In Detroit, there’s so many venues open, a lot of house shows,” Rose said. “When I came to Lansing I missed some of that.”

Rose put the word out about Snake Rodeo to artist friends in the student community. He expects them to bring a lot of paintings and prints, including some of her own.

“I saw a need for more music and arts venues, especially for college students, high school students and artists who are in their 20s and 30s but aren’t in college,” she said.

At the old Snake Rodeo, artists were asked to bring a snake (usually made of rope) to have their work shown. The new Snake Rodeo waives the rule but still welcomes snakes of all kinds.

Koenig paints pictures of “antiheroes” and plans to bring some to the Rodeo. “John Waters — he’s a bit of a snake,” Koenig said. “William Burroughs — he’s a snake.”

Lansing puppet artist Fred Engelgau still has the 9-foot, purple-and-black snake he made 20 years ago for a Snake Rodeo. He remembers being inspired by a large piece of rope with a forked end like a mouth and a knot for an eye.

“It’s lurking in my brush pile, curled among the branches,” Engelgau said. “It still has some paint on it. I think I’ll go fish it out of the branches and bring it to the new one.”

Other than the snake, Engelgau’s memory of bygone Snake Rodeos is sketchy.

“It happened, and then it didn’t, and now it’s happening again,” he declared. “Whoever’s doing it, they’re crazy, that’s for sure.”