Warm up with chilling tales at Schuler Books 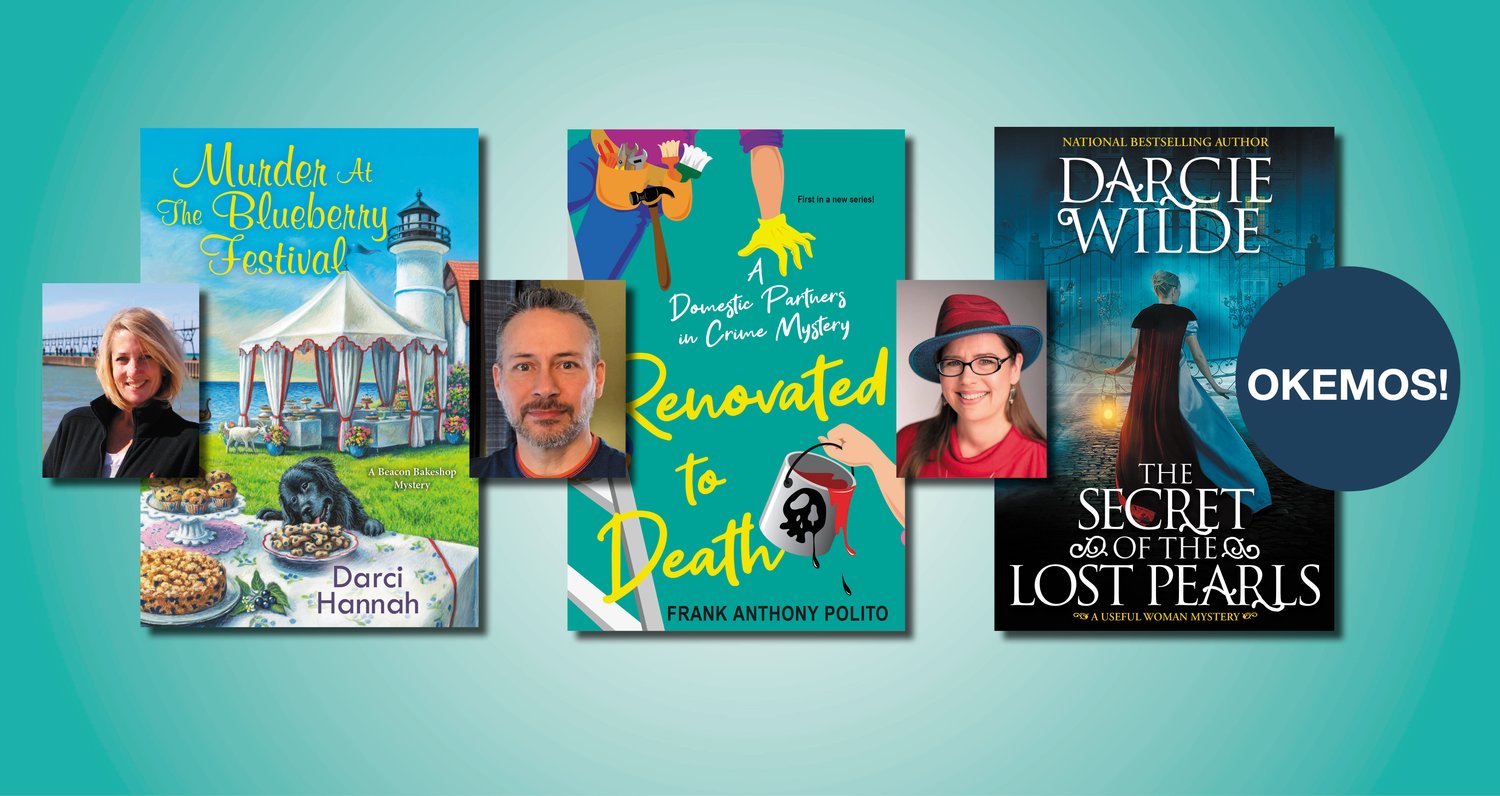 Winter is the time to get cozy and warm up in front of a fireplace, which is what mystery readers will be able to do at Schuler Books 7 p.m. Thursday (Jan. 19), when three Michigan “cozy” mystery authors will visit the store to talk about their new novels.

It has been quite some time since author visits were a norm. Just as we were beginning to get squirrely, Schuler decided to shut off Zoom for an in-person event featuring Darcie Wilde from Ypsilanti, Darci Hannah from Howell and Frank Anthony Polito from Pleasant Ridge.

For the uninitiated, a “cozy” mystery is a more light-hearted, fun and less violent approach to the murder mystery genre — and one of its fastest-growing segments.

Darcie Wilde has been writing historical mysteries and romances for seven years. In her new Rosalind Thorne book, “The Secret of the Lost Pearls,” Thorne, a “fixer” (or, as she is called in the books, a “useful woman”), finds herself once again entangled in solving a problem for the social elite. There appears to be a lost set of valuable pearls, and she is called in to discreetly find them. Of course, a murder intervenes. The story, inspired by Jane Austen novels, takes readers along to the glittering ballrooms and elegant parties of Regency London.

Wilde describes “The Secret of the Lost Pearls” as “if Jane Austen and Arthur Conan Doyle sat down to write a mystery.” She describes her protagonist as a “gently bred lady who helps the aristocracy manage their lives.”

“What makes writing about the Regency period so exciting is everybody wrote letters and had a diary, and it was the golden age of magazines and novels,” she said.

Darci Hannah has tied together some of her most precious memories for her new book, “Murder at the Blueberry Festival,” which is set in the fictional Lake Michigan beach town of Beacon Harbor. The protagonist, Lindsey Bakewell, lives in the historic Beacon Lighthouse and has opened her Beacon Bakeshop inside. During the city’s premier tourist event, someone turns up dead, and Bakewell steps in to solve the murder.

“The lighthouse is an important character in the book. They are part of the mystique of the Great Lakes,” Hannah said.

Hannah, who grew up in Chicago, loves the Great Lakes, and her new book ties that love with her penchant for baking and big dogs. She lives in small-town Howell, which is known for its festivals.

“I love small towns. Everything is so connected and everyone knows everybody,” she said.

Frank Anthony Polito is new to cozy mysteries. His first book in the genre, “Renovated to Death,” is a wild romp set against the backdrop of a reality TV series, “Domestic Partners,” featuring home renovation and house flipping in suburban Detroit. The book follows a gay couple whose new vocation has taken off. That is, until a dead body shows up at the bottom of the stairs in one of the episodes. To get back on track, they must solve the murders.

Polito, who attended Michigan State University and graduated from Wayne State University with a bachelor’s degree in theater, is an actor, playwright and author of “teen books for adults,” including “Drama Queers!”, “Band Fags!” and “The Spirit of Detroit.”

He and his partner lived in New York City for 18 years before moving into a nearly 100-year-old home in Pleasant Ridge. They purchased the 1924 Craftsman colonial on HGTV’s “House Hunters” and have been renovating it for nine years. Much of the experiences in the book are drawn from their hands-on home improvement.

“I hadn’t written a book in 10 years when my publisher convinced me to write a mystery,” Polito said.

The book is set in the fictional city of Pleasant Woods, which is based off of Pleasant Ridge.

“I got to make up a little town, and that’s part of the fun,” he said. “There’s a zoo nearby, and I kept Woodward Avenue the same.”

Readers, especially ones working on older homes, will enjoy the book’s quirkiness and get some inside winks at home renovation, which Polito says “always takes longer, costs more money, and there is never enough time.”