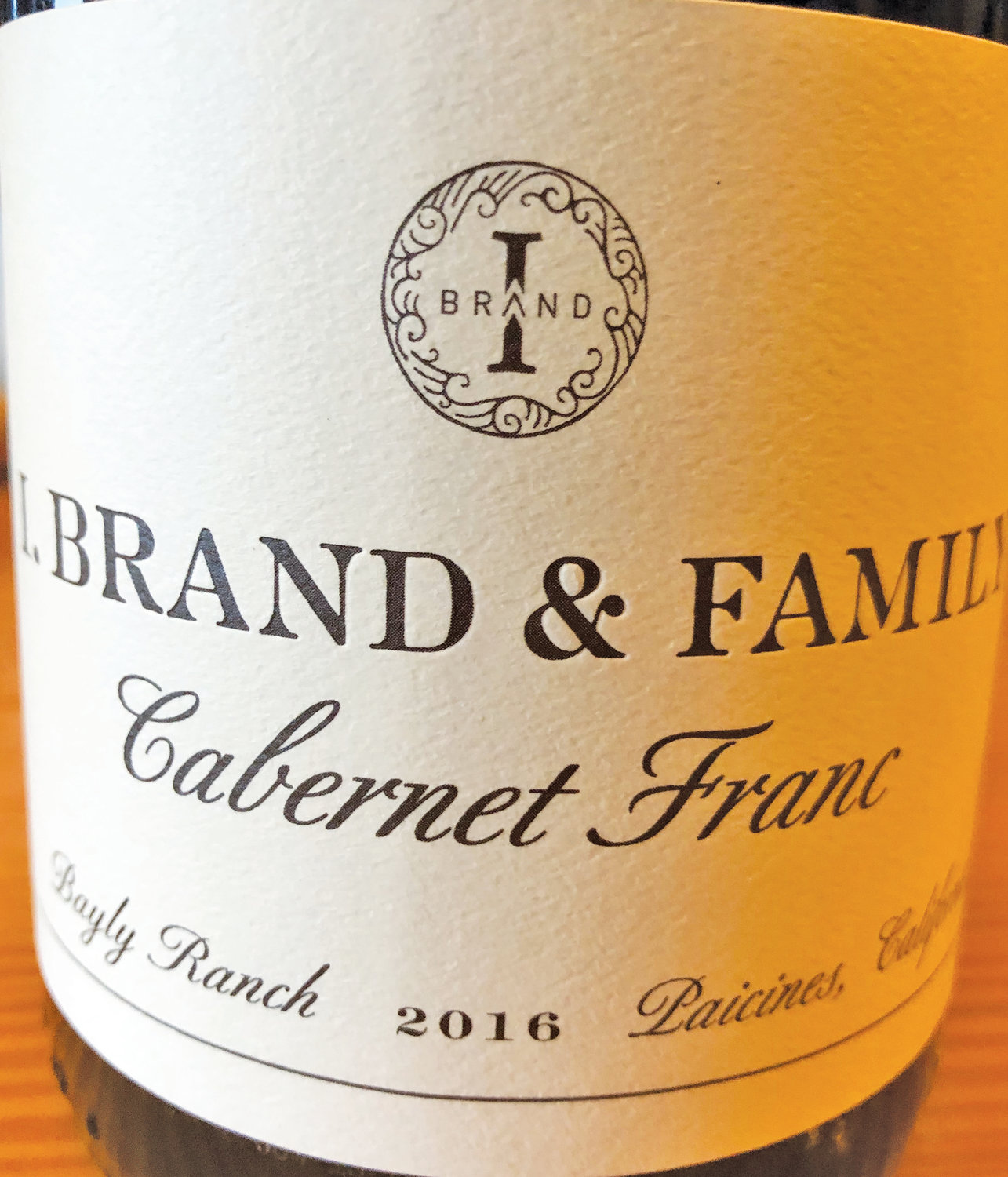 A stunning California cabernet franc had me thinking about a complicated food and beverage issue for a few days.

First of all, the wine is lovely. I will unquestionably drink this wine again, and soon. It’s the I. Brand and Family 2016 cabernet franc. It retails for about $30, and hails from Paicines, California. And it tastes like a wine worth twice its price.

So, we can take a glimpse through the lens of this wine and the winery: The story of the Brand family. How Ian Brand is an upcoming superstar. How cabernet franc has not often been the star of the show from the west coast. How cabernet franc’s varietal success from its home of Chinon has barely registered with American palates.

Or we can just say the wine is awesome. It’s big, robust, but balanced. The black and red fruit tendencies to this wine don’t feel like overstuffed jam on toast. It feels full of flavor and complexity. And any oak aging does hit you over the head like a vanilla bomb.

Occasionally a wine just reminds me that I need to shut up and just enjoy the drink. I know good descriptions do matter. Wine descriptions make total sense when you taste a wine that is being described: “Blueberries? Cassis? Yeah I can see that!”

Other times they may come across as bloated at best, self-serving at worst: “Crystalline? Pristinely delineated? What the hell does that even mean?”

Giving the benefit of the doubt, I tend to read these ham-fisted attempts as failures to articulate because the writer tried to get too, too specific.

When it doubt, be simple:

Is the wine good?

Is it worth what it costs?

Can this please be explained as simply as possible?

What kind of consumers will like it? (Is it worth discussing for a particular audience?)

Our relationship with consumers at large is the whole point. Food criticism has a similar mountain to climb. With seemingly limitless bounds of culture foraging that wrangle with the mess of infinite information access, many food lovers — spurred by Food Network and problematic food critics — are on a quest for perfect authenticity.

I’m trying to imagine a world where it matters how precise my completely unimportant wine verbiage is, and I’m trying to imagine a world where it’s important for a white person to go on record and rank another culture’s restaurants on the authenticity continuum. Neither of these food or wine exercises seems particularly helpful to exposing people to tasty things. It doesn’t read like criticism to me; it reads like condescension.

It’s a fool’s errand that is right in line with the nauseating gatekeeping vocabulary that wine writers often use. Favorite chefs like Massimo Bottura or David Chang have made worldwide reputations on their work, but not that much of it has to do with authenticity. But they are still well loved in chef circles, and for good reason.

They do not seem to concern themselves with that silly debate.

The (implied) wine elitism is a complaint that still rings true to a lot of industry folk. Simply put: If you’re trying to sell something and it seems like people don’t care what you’re saying, please stop talking. Let them eat dinner.

Learning to read the room is important for anyone selling anything; though I would say as a frequent diner that hearing the words “Are you still working on that?” is still legitimately the worst thing in the world.

Wine writing has traditionally stayed in this direction. Sometimes we use this flowery language with little discernible relationships with day-to-day smells and tastes. This sort of preciousness may be useful in wine studies, but seems to have an adverse effect when talking about wine to people just looking to drink something good without getting poetic.

As someone who’s been in this industry for almost two decades: I apologize if I contributed to that.

The concept of gatekeeping is an old one, and it’s something that all food and wine writers need to bust the gates open on, as soon as possible. There is too much great stuff out there. We should let the wine speak for itself, as best as we can, especially this cabernet franc. Because I really think you should try it.

Justin King is an Advanced Sommelier through the Court of Master Sommeliers, and owner of Bridge Street Social, a wine-and-cocktails focused restaurant in DeWitt, and also Bar Mitena, a Spanish winebar opening soon on Lansing’s Eastside.