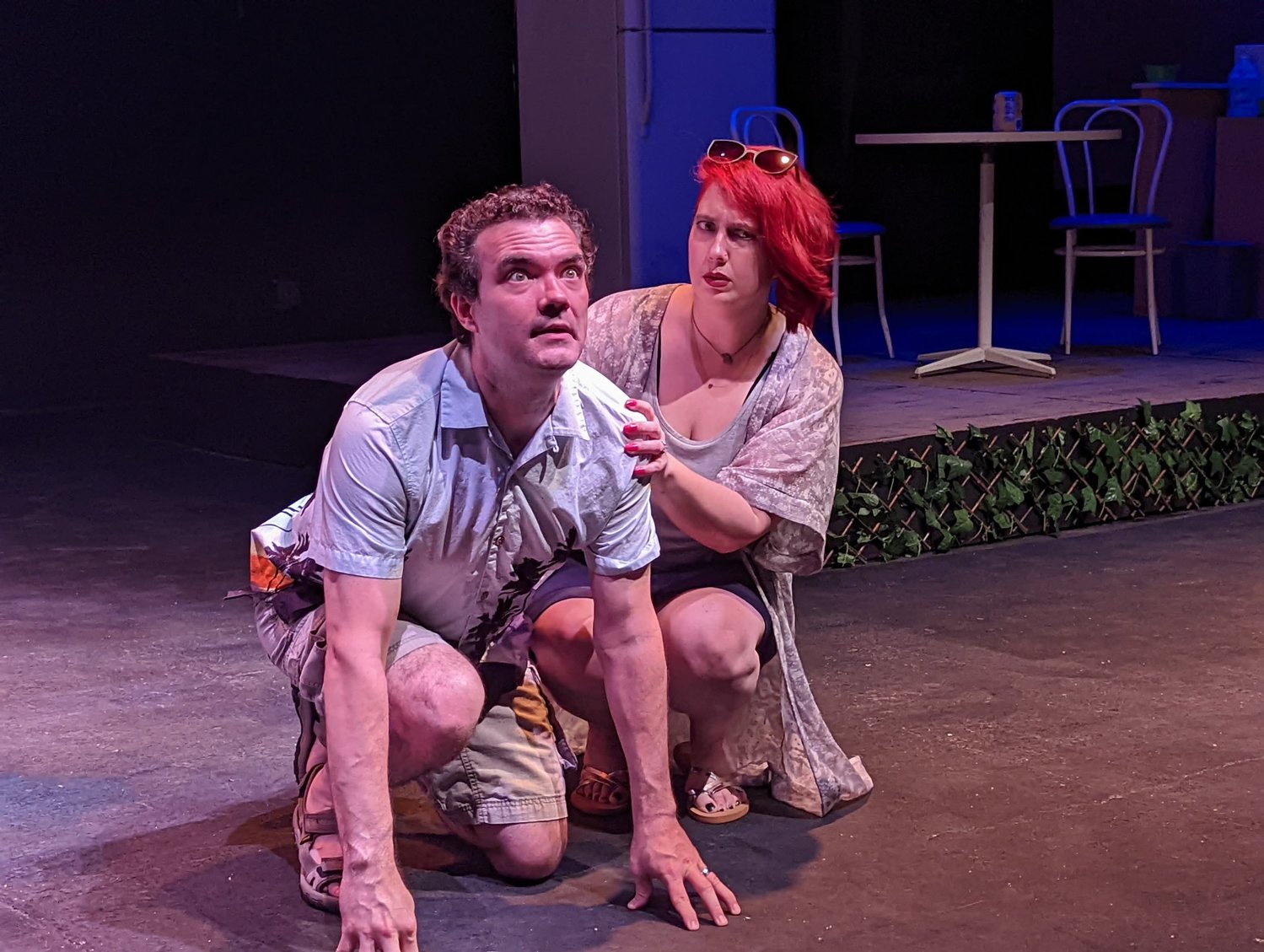 Joseph Dickson and Rachel Mender perform as Pony and John Jones in Over the Ledges' production of "The Realistic Joneses."
Courtesy/Joseph Dickson
Posted Friday, July 29, 2022 1:01 pm
Where and when

''The Realistic Joneses" is a refreshingly deep plunge into the reality of long-term love as told through two couples who happen to have the same last name. Although the show has serious themes, the dialogue is disarmingly funny, and the plot is unpredictable. From start to finish, both the characters and I wanted to know what would happen next.

Debbie Lundeen leads the cast as Jennifer, a wife who is sacrificing as she takes charge of her husband’s mysterious illness. Lundeen plays opposite Michael Phelps in the role of Bob, a man vacillating between withdrawn and petulant as he would rather let his wife deal with his impending mortality. One night, while tersely attempting to relax on their patio, Bob and Jennifer are interrupted by their new neighbors Pony (Rachel Mender) and John (Joseph Dickson), who have moved to town for a mysterious reason.

If knowing your partner is a fantasy better left to the movies (because it is), "The Realistic Joneses" is about knowing who you are, even in a partnership. Each character uniquely battles the same central conflict: The need for connection alongside the fear of intimacy. In some relationships as time goes on, less is said, and more is understood. Sometimes more is said, and less is meant. John asks, “Is my life a billion little words or is it just one word?”

As an ensemble, the actors expertly portray the way couples talk over each other in those half sentences that mean nothing to the other people in the room. And the script uses the way couples naturally polarize to comedic advantage. But it doesn’t rely on outdated tropes about married people. It creates new, very real ones as it explores the limits of modern marriage, two people living in isolation, and the necessity for emotional, psychological, and spiritual support from a community that might be just next door.

This show was put up on short notice after the (hopefully temporary) closing of The Ledges Playhouse in Grand Ledge. As a result, Riverwalk and Over the Ledge are sharing proceeds of this production.

The creative use of lighting and sound were especially impressive, then, transporting me to a dark night in a quiet mountain town. Insects chirped, the radio played softly, a bottle of wine was uncorked. Throughout the show my partner and I looked at each other, as if to say, "Did you hear that? Can you believe him? We would never." All in all, I felt like I was keeping up with the Joneses: happy, angry, grateful, scared, and real.