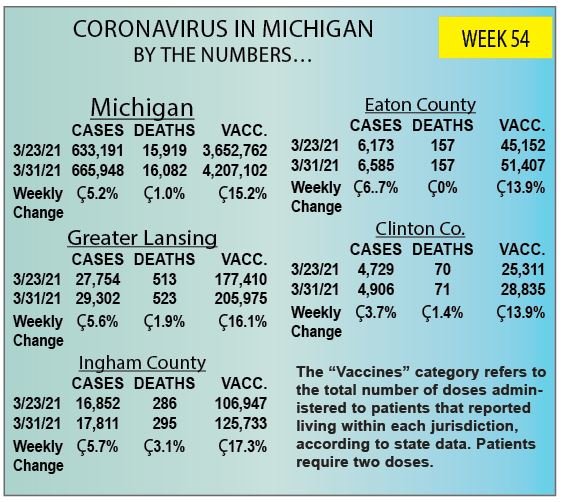 A recent surge in COVID-19 cases over the last two weeks made the Greater Lansing region among the metropolitan areas with the fastest climbing rates of coronavirus cases across the country. And now as a result, health officials are warning local residents to brace for impact.

“We are not through this. Don’t give up now,” said Ingham County Health Officer Linda Vail in a Facebook post Sunday. “We need everyone with us for a little while longer as we continue to vaccinate enough people. Michigan is doing poorly. Our numbers are soaring.”

Michigan’s seven-day average of new cases reportedly doubled since March and is resting at its highest point in 2021, with a statewide average positivity rate of about 15% Tuesday. The state ranked second in the nation (behind New Jersey) in new cases per capita this week, with the Thumb region as well as Macomb and Jackson counties with the highest transmission rates in the country, according to reports published in The New York Times over the weekend.

Lansing, which likely includes neighboring East Lansing, was ranked seventh-worst nationwide — prompting Vail to post her cautionary message on Facebook.
“We can do better. We have done better. Don’t give up on me now. We need you in this for just a little while longer,” Vail said. “We’re getting these vaccines out. Help us until we finish.”

Health officials have since pointed to changes in the state’s epidemic orders — including increased restaurant capacity — for the climbing infection rates. Vail’s commentary also corroborates reports that increased hopefulness and pandemic fatigue have contributed.

Other state health officials suggested the B.1.1.7 variant, which was first identified in the United Kingdom, could be responsible for increased transmission rates. The Michigan Health and Hospital Association told The Detroit News that the variant is now “widespread” in Michigan.

In Greater Lansing, more than 1,500 new cases were tracked over the last seven days, as well as 10 more virus-related deaths. The region also tracked its 200,000th administered dose of vaccine this week, adding into more than 4 million shots now administered across Michigan.

“Our rollout continues to pick up steam and we will not rest until we reach our goal of equitably vaccinating 70% of Michiganders ages 16 and up,” Gov. Gretchen Whitmer said in a statement. “Michigan continues to make significant strides — administering four million vaccines in less than four months — as we work to ensure every Michigander has access to the vaccine.”

Under new state legislation, all Johnson & Johnson COVID-19 vaccines administered in Michigan (with certain federal funds) are now reportedly required to include a disclaimer that they were developed using stem cell research that involved tissue from aborted fetuses.

The East Lansing City Council voted to continue to meet virtually through at least May 16.