Owner puts a personal touch on everything at Thai Princess 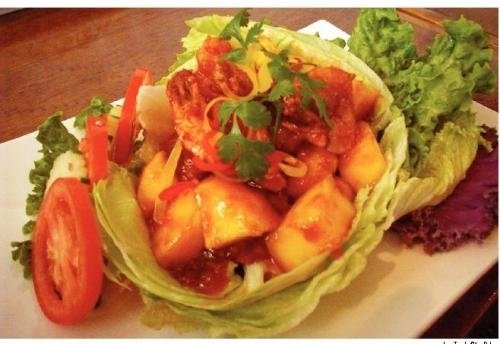 Curled slivers of yellow bell pepper, aery nests of beet and daikon teased into maroon and white spirals that seem to lift off the plate, and cucumbers carved into starbursts adorn meticulously crafted meals at Thai Princess in Okemos.

While some diners are happy their meal is simply edible, Thai Princess should please a higher standard gourmand with a kitchen that combines years of experience developing flavors in the toughest of restaurateur proving grounds — New York City — with an artist’s eye for aesthetic presentation.

Thai Princess owner Thaowan Ratanaruch, a Thai immigrant who journeyed to the New York/New Jersey area over 20 years ago and who goes by the Angli-cessible name Noy, has operated restaurants in Manhattan, Queens and other spots around the country’s largest megalopolis.

It is the Lansing area’s culinary gain that she has relocated inland, where she has friends and family. She has a new boyfriend, too: Dean Clarkson, a local contractor who helps Noy operate the Thai Princess in his spare time.

Like the eyecatching plates she and her crew assemble, Noy used her creative instincts to design the soigne interior of Thai Princess. A wood grid ceiling with occasional earthtoned tiles, a dark brown wood floor and bister-hued seating establish a palette. A khaki slate stone wall stands opposite a wall of vertical white wood paneling onto which a painting of horizontal boughs with pink blossoms and teardrop-shaped leaves is mounted, brushed by a friend from New York City. In one corner, colored silk flowers rest in bottles lit from under, punctuating the space with lambent violet, teal and azure light.

An elegant interior is pleasant, no doubt, but what makes Thai Princess a destination is the food. Clarkson says he often joins Noy and others on trips to the market — often Horrock’s or Meijer — where cartloads of produce invariably shock an unsuspecting cashier.

"She wants fresh produce, and she wants to select it herself," Clarkson says. You might purchase a bushel of apples from a typical supplier, he notes, but you get what they give you.

"Noy’s picky because presentation is so important."

Taste is important, too, and Thai Princess has that nailed. The pad lard prik ($15.99) is a whole tilapia (or filet, if preferred) breaded and deep fried. It rests on a ruffled romaine leaf and is topped with chilies, onions and bell peppers. It’s served in a spicy sauce and adorned with crescents of tomato and a sprig of green and purple basil leaves that look like they are sprouting from the plate.

The mango delight ($13.99) combines crispy fried shrimp with chunks of ripe mango in an bowl of iceberg lettuce. The shrimp (or chicken for $11.99) and mango are brought together by a sweet and sour sauce, one with smoky undertones that suggests a of barbecue. It’s crowned with slivers of red and yellow bell pepper and a leafy stem of cilantro, flanked by tomato discs, a carved slice cucumber and a leaf that kale that gives the dish a purple flourish.

The appetizers are homemade, and the sauces that come with them are, too. Clarkson says he’s never surprised to walk into the restaurant after or before hours and find a group of women gathered around a large pot, assembling dumplings or crab rangoons onto trays.

The crab rangoon ($3.99) is a triangular pocket of deep-fried fun. The creamy inside has a touch of green onion and other vegetables along with crab, giving it a bit of depth, gently mellowing the tang.

The curry puffs ($4.99) are a treat. A deep-fried, delicate puff of pastry surrounds a mixture of chicken, curry spices, potato and onion — think samosas reimagined. The steamed dumplings ($4.99) are worth a try, too.

Colors and shapes on the plate bring a meal to life. Artful decor builds atmosphere. And flavors reign supreme. Experience and instinct guide a veteran chef like Noy, and whether in Bangkok, New York or Okemos, she distills the secret of restaurant success to a simple essence.