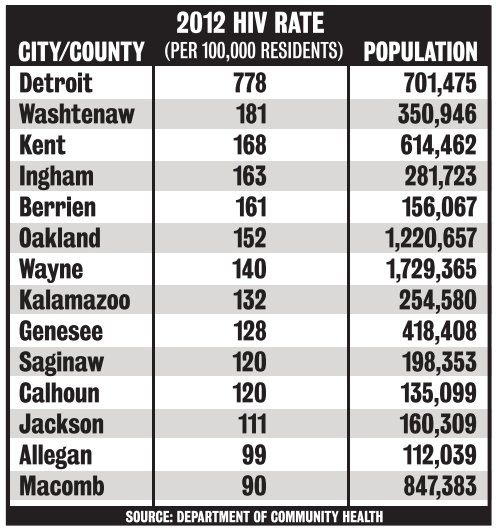 The HIV crisis is far from over in Michigan. And among counties with high HIV rates, Ingham ranks near the top.

Thirteen of Michigan’s 83 counties have high HIV rates as of 2012, according to the most recent state Department of Community Health report. They include Ingham, Macomb, Allegan and Oakland.

But higher than any county is the city of Detroit, with 778 cases per 100,000 people. Wayne County outside of Detroit ranks as the sixth-highest county.

“Rates are typically higher when you get to urban areas or highly populated areas where you have a lot of people in a condensed area,” said Angela Minicuci of the Department of Community Health.

Twelve of the 13 high-rate counties have populations above the statewide average. Allegan County is slightly below that average.

Population numbers alone don’t explain everything, though. For example, Oakland County has almost twice the population of Detroit, but Detroit’s HIV rate is more than five times higher.

Minicuci said the makeup of the population helps explain this anomaly.

“Detroit has a large population of black males who have sex with males,” she said. “And that group has the highest risk factor for HIV.”

This high-risk group can be narrowed further by age. Of HIV-positive 13- to 19-year-olds, black males who have sex with males make up 58 percent of reported cases.

Minicuci said the problems compound when trying to reach out to that group whose members don’t necessarily identify themselves as gay or bisexual. That can lead to denial and a hesitancy to seek testing.

“It’s a huge challenge, getting some men who have sex with men to get tested,” Minicuci said. “The ones who don’t self-identify don’t get tested as much, and we need them to get tested and know their status.”

Sutton said his organization, along with many others across Michigan, recognizes the need for outreach that young people respond to.

“We reach out to schools and other community venues to promote HIV testing,” he said. “We have an HIV and STD hotline available via text message, where you can ask questions and get health information confidentially,” Sutton said.

To connect with youth, that 24/7 textmessaging service, called SEXTME, is also advertised on social media outlets like Facebook.

Reaching out to at-risk populations is still an uphill battle, experts say.

“Years later, HIV still has that stigma of a ‘gay disease,’” Minicuci said. “And there are a lot of LGBT organizations doing wonderful work. But if you’re young and uncomfortable identifying as LGBT, chances are that you’re not going to know about or access those resources.”

AIDS Partnership Michigan works closely with the Ruth Ellis Center, an organization that provides resources to LGBT and homeless youth.

To help tackle that problem, Ruth Ellis also reaches out to medical professionals to give advice on how to obtain and convey information on HIV risk.

“We’re trying to get physicians to ask the right questions,” Erwin said. “For example, if a doctor doesn’t know if a kid is transgender, they may not know if they’re taking street hormones. They may not know that they’re using dirty needles that increase the risk for HIV.

“Navigating the health care system for testing and treatment can be overwhelming, especially if you’re young or lack transportation and proper resources,” Erwin said.

“There are a lot of these factors that can put you at risk.”