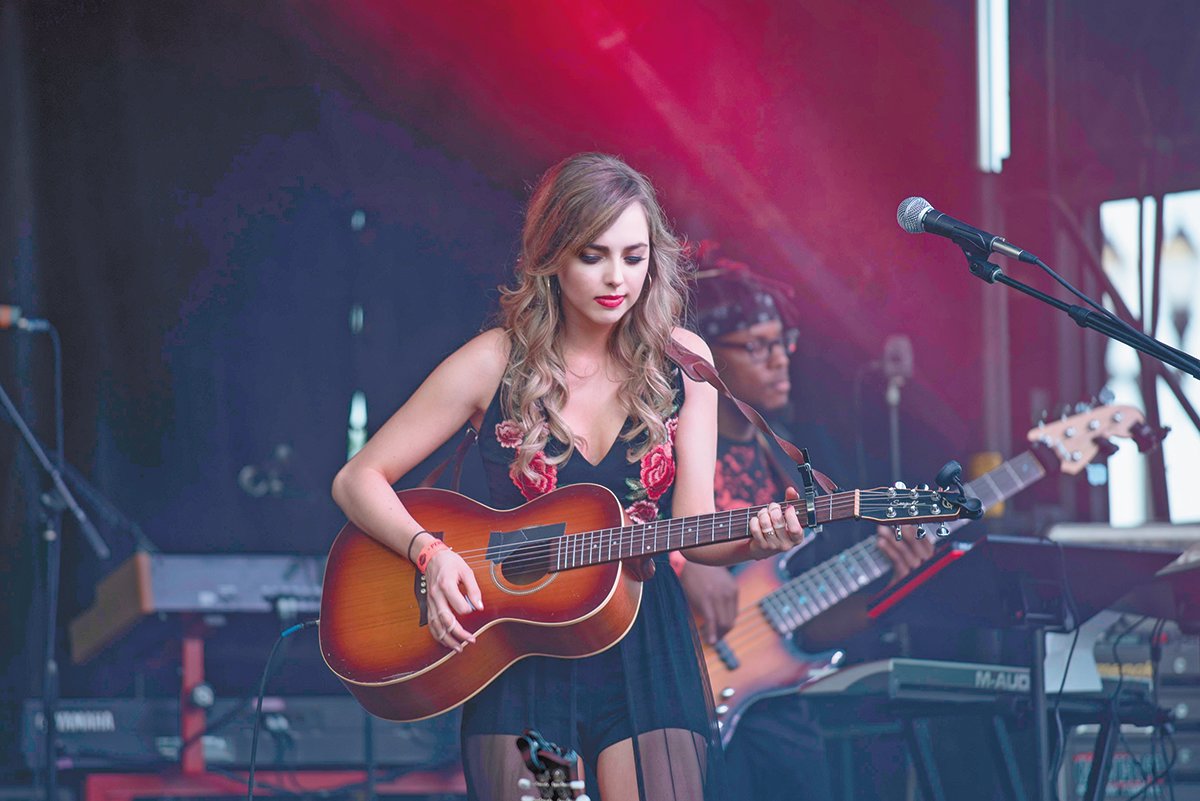 Curtis debuted in 2018 with her “Senses” EP and has since dropped a stack of folky, dreamy singles. As for “Strobe Lights,” it was co-written and produced by band bassist Tyler Tesla.

“Tyler came to me with an intriguing main guitar riff and listening to it made me think of a long, relaxing car trip — looking out and seeing the afternoon sun shine through the trees lining the road, resembling a strobe light as you move past,” Curtis said. “Writing the song provoked a pleasant memory, filling me with a calm, peaceful feeling from past adventures.”

Here’s more of what Curtis had to say.

Who has inspired you the most over the years as a songwriter?

When I first started writing music that I intended to share, Hozier had just released his first self-titled album in 2015. I really gained influence from his poetic lyricism and his unique melodies. Most recently, Maggie Rogers has been an incredible inspiration for me, as she started off with a more folk inspiration and has merged that into a contemporary pop sound in her more recent music.

Your new single is much more pop than some of your previous recordings. What inspired that?

Growing up, I would listen and be inspired by multiple genres all the way from Christina Aguilera, Alicia Keys, Norah Jones to Dolly Parton and Ella Fitzgerald. Then, when I started performing and releasing music, I became interested in more folk pop bands like Vance Joy, The Lumineers and Florence & The Machine. My releases in the past have leaned toward more of a contemporary folk-pop sound. I’m excited to explore a different style of music in me that I haven’t really focused on after listening to more pop the past couple of years. My upcoming songs have naturally drifted into more of a pop sound that I gained inspiration from at an early age.

How did the “Strobe Lights” video come together?

As far as the video, my mom was the one who found the space “Glenlore Trails” outside of Detroit. She has always been a huge help with not only the creative input for this video but past album covers and photography. We came up with the idea of sewing battery powered lights into my old prom dress and planned out the scene ideas. I don't consider myself much of a dancer, but I started coming up with ideas in my apartment kitchen. Honestly, the video just felt like it magically came together. I contacted a super talented local videographer, Craig Derek Jones, and his team was on board. I couldn't be more grateful.  After seeing the interactive light forest, we knew that it would be a perfect way to convey the vision of a past adventure in a magical way.

After a long year without live shows, I really missed that sense of community and excitement. During that time, I was able to focus on multiple new songs I plan to release throughout the year. It was a much-needed break to focus on learning more about the music industry, what style I wanted to focus on creatively and how to collaborate virtually with others. Oddly enough, I have collaborated more during the pandemic than at any point in my musical journey. I also ended up recording the vocals from my couch which was definitely a first for me.

Looking back, when did you first start writing and performing live?

I first started writing songs in middle school for fun but I didn’t start actually sharing the content till senior year of high school. I had always done little talent shows, national anthems and musicals growing up, but right out of high school is when I started singing in bars. It all actually kind of snowballed from singing karaoke at Reno’s West. The owner put me in contact with the talent manager that brought bands in to play. I then joined a duo, started playing more shows, and then eventually started solo gigs and finally the full band. It is pretty crazy to me that signing karaoke a few blocks away from where I grew up started a journey I hope to continue into the future.

After this new single, what are your plans for 2021?

I am looking forward to some safe, socially distanced, outdoor shows this spring or summer. I also plan on releasing multiple singles and music videos throughout the year. I am thankful for all the built-up creativity after being quarantined in 2020. I can’t wait to continue to share.