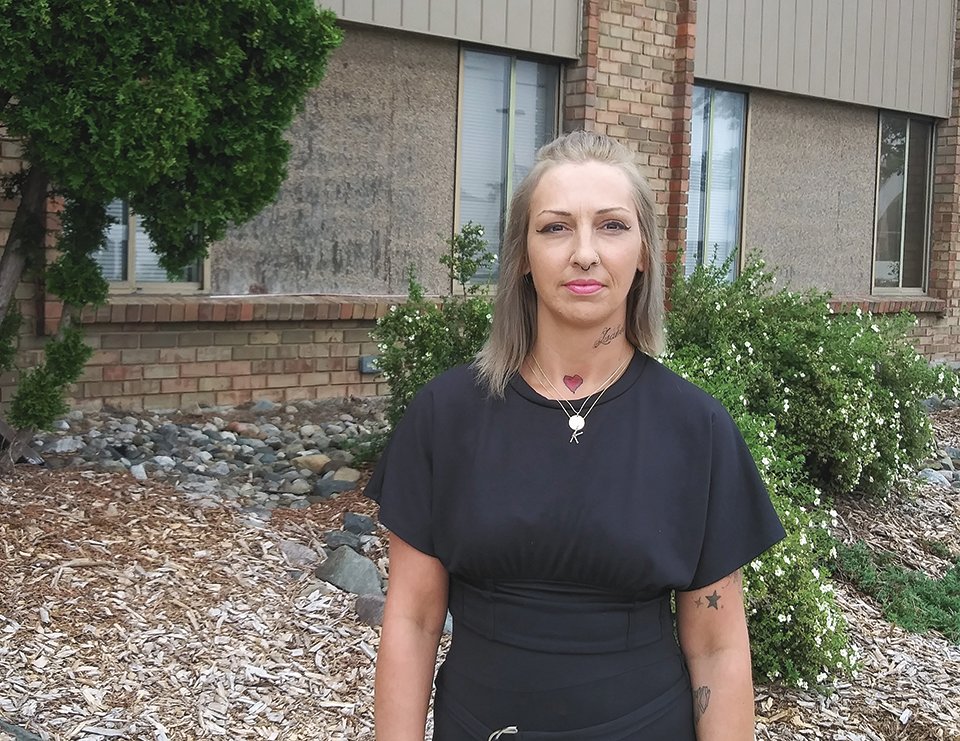 Kristen Janecke is turning her life around after overdosing on heroin, but doing so during the pandemic has only made a difficult process even harder.
Todd Heywood/City Pulse
Posted Wednesday, July 14, 2021 12:00 am
TODD HEYWOOD

Kristen Janecke remembers seeing faces of strangers in uniforms when she came back to consciousness. Cops and firefighters were yelling at her to wake up as she lay sprawled on the floor of a local McDonalds. Her 5-year-old daughter told staff that she could not wake mom up.

“It was terrible,” Janecke recounted.

The 42-year-old Lansing resident had overdosed on an injection of heroin laced with fentanyl. Officials were forced to revive her with the drug naloxone, a strong anti-opioid drug that reverses the effects of the drug and can work to revive a person after an opiate overdose.

“I immediately asked for help,” she said.

For addicts, recovery is difficult enough normally. The pandemic only worsened the experience.

Janecke’s case manager at a local homeless shelter was able to connect to her with inpatient services. It was February 2020. COVID-19 was looming, but it hadn’t been detected in Michigan.

But by the time Kristen entered an inpatient recovery facility, the virus had arrived. Her recovery would be marred by both the struggles to overcome dependency to heroin and also the isolation of state health orders that shut down the city and the many in-person support groups.

“It was difficult,” she said. “We were kind of all locked down together and there were struggles.”

After inpatient care, Janecke went to transitional living. All meetings and contact were via Zoom.

“We were in our rooms, on our phones, doing meetings and people were there, but they blacked out their cameras and weren’t talking,” she said. “It was a very weird thing.”

Since February, Janecke has been enrolled in medical assisted therapy, which slowly replaces a heroin with measured doses of methadone until the user is no longer dependent on either drug.

But the pandemic lockdowns only worked to make the recovery process harder, she explained.

“I hadn’t had much support in my life. All of a sudden this envelope of support was gone,” she said.

Janecke now helps others through their recovery efforts through a new nonprofit called Lifeboat, where she can again connect with people in-person for meaningful recovery conversations.

Nick DeMott, 32, is the network center coordinator for Lifeboat. The program serves as a wraparound community center for those in recovery. It offers meetings related to various forms of recovery — not just the traditional 12-step program. It also offers access to computers for participants to access schooling, support meetings and apply for state benefits.

“Recovery is a journey,” DeMott said over fried food at Wing Heaven Sports Haven, a new sober sports bar on the south side of Lansing. “Some people need a different option than a 12-step.”

DeMott was one such person. He found that using a recovery program seeped in meditation and Buddhist philosophy helped his recovery from heroin addiction. But the pandemic lockdowns — like so many others — had served as a key hindrance to his recovery efforts.

“The guided meditations by Zoom weren’t the same,” he said. “They just didn’t connect for me.”

Early in the lockdowns, which took place just as Lifeboat was launching, the facility shut down. But as the days ticked by — and the need for support increased — a decision was made that the facility was an essential service under the gubernatorial and statewide health orders.

They reopened with COVID-19 screenings and masks.

Meanwhile, Shawn Finnerty was working in the hospital emergency rooms assisting those testing positive for drugs or those who had come in for overdose treatments. His job was to introduce people to the idea of recovery processes.

“We meet them and talk with them,” he said. “We give them information on recovery. If they take that information, we call it a win.”

That’s because few are immediately ready for recovery. But that human connection and introduction to services can lead to seeking assistance down the road, he explained.

Finnerty watched from his position at the hospital as the nature of those showing up for assistance changed. Early in the pandemic as people got their checks from the federal government, there was an uptick in overdoses.

“People had money, and not much else to do,” he said. “So there were overdoses.”

But then, it shifted. The drugs on the street dried up as the pandemic lockdown continued. Finnerty suspects drug transportation lines had been hampered by the pandemic. Hospitals started to see more people with withdrawal symptoms who went into involuntary detox, he said.

Now that the lockdowns and restrictions have lifted, Finnerty said he is — once again — seeing more overdoses related to heroin. He estimates about one a day at his local emergency room.

But they are also seeing an influx of methamphetamine overdoses, characterized largely by extreme psychiatric manifestations that include psychotic breaks. There is not much he and his team can do to support those folks, but they certainly haven’t stopped trying, Finnerty explained.

Janecke has joined the Lifeboat team as peer support advocate. She’s rebuilding her life and is no longer homeless. Her children are back by her side. But she and her husband have separated as he continues to spiral into addiction. When the two sought refuge during homelessness, she went to a shelter and he stayed on the streets.

“I am hoping by telling my story, my truth, I can reach and help at least one person,” she said.