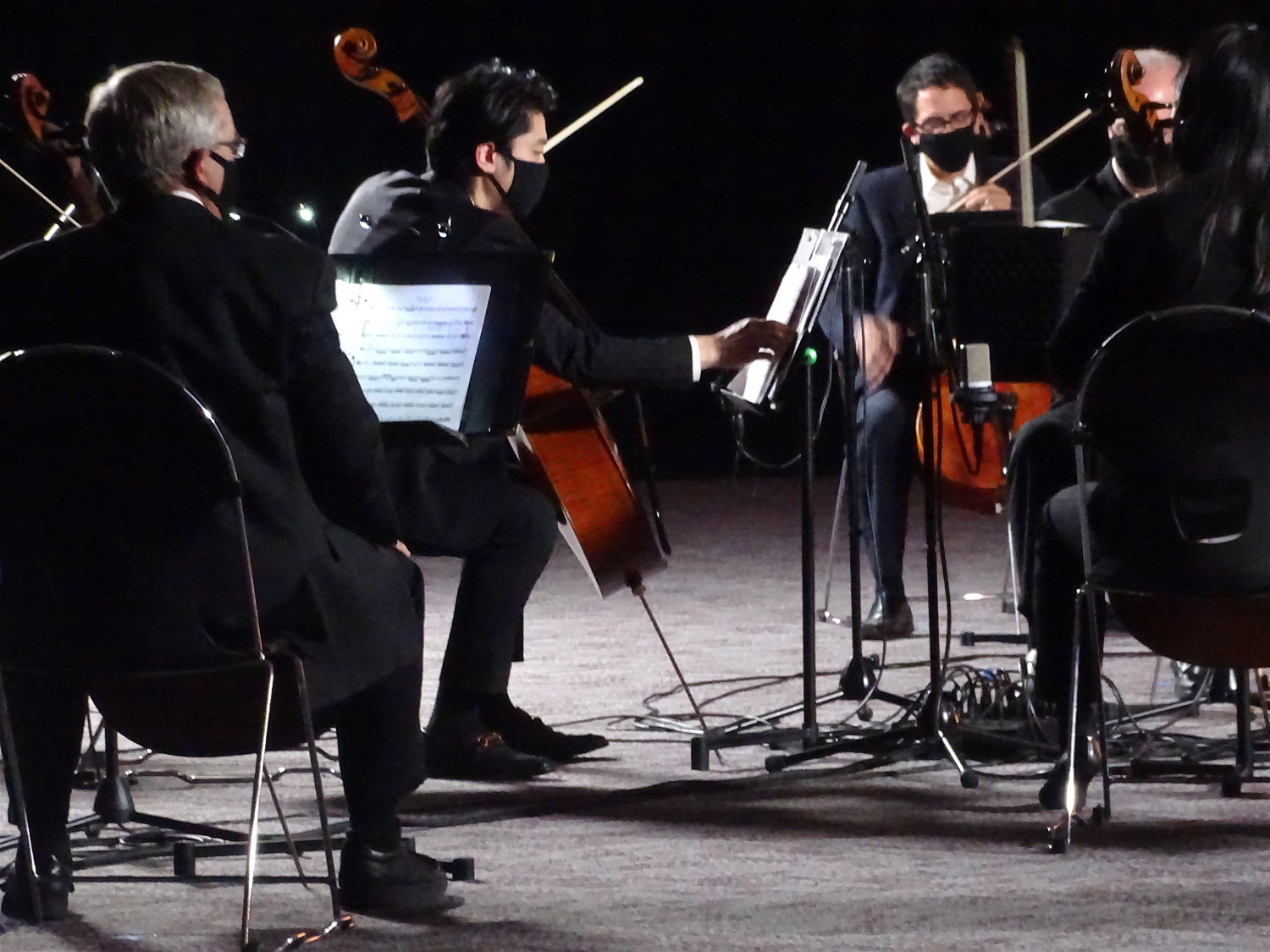 The dark margins of the sound stage at Lansing’s Public Media Center looked like a valley of Egyptian sarcophagi, with 12 human-sized cello cases scattered around in various poses.

It was an unusual Lansing Symphony concert. Instead of leading a full orchestra in view of 2,000 people, maestro Timothy Muffitt paced back and forth behind the soundstage, alone, listening intently. He settled into a chair for about half a minute and sprang back up as the music reached a crescendo.

Sound and video technicians busily bottled the notes on a series of sunny afternoons in December. Listeners can crack the bottle and enjoy a welcome sign of life from the orchestral home team when the concert goes online Monday (March 1).

With the 2020-21 season cratered by cancellations, Muffitt saw a chance to do some things the symphony wouldn’t normally do. An ensemble of 12 cellists is an anomaly you’ll never see at a subscription concert, and  too big of a group for the usual chamber concert.

“It’s not something you should try at home, either,” Muffitt cracked as the cellists broke into pairs and chatted in the driveway during a break.

The masked cellists had 40 minutes to rehearse before the room was cleared, the chairs and equipment sanitized and the air was left to circulate for an hour. Then it was back to work again.

To build a coherent and meaningful hour, Muffitt wove a tight braid of music from the Brazilian composer Heitor Villa Lobos, Baroque composer Antonio Vivaldi and the symphony’s composer-in-residence, Patrick Harlin. A mixed ensemble of violins, violas, cellos and a bass play the latter two works.

Harlin’s music is the show-stopper. Inspired by the murmurations (flocking patterns) of birds, jet contrails and perceptual tricks played by a free fall, the music plummets to its doom and floats in ecstatic suspension at once. The cellists meld into a collective prism and achieve a glassy sonority that refracts a thousand elusive colors.

Clarity, counterpoint and a deep-breathing life force is woven into all three works on the program. In a parched concert landscape, it’s a tall drink of water, drawn from the crystal well of Baroque masters Bach and Vivaldi.

The intertwining cello lines of “Bachianas Brasilieras” pulsate with Villa Lobos’ love of Bach. “Autumn” from Vivaldi’s “Four Seasons,” gives you the real Baroque deal. Harlin’s “Art of Flight” is a floating, free falling effusion of joy and loss, with a transparent, modern sensibility, but it contains a direct quote from “Autumn” and even features a harpsichord.

Having masterminded the program, Muffitt largely stayed out of the way while principal cellist Hong Hong and his 11 colleagues collectively worked out the music.

“I wanted to see a chamber music experience, so I stayed on the sidelines,” Muffitt said. “I popped in and out, listened to the rehearsals and made some notes.”

At the Villa Lobos taping, Muffitt asked the cellists to play the third movement once more, which they did, with more urgency and bite, but he kept his input to a minimum.

“It’s more fulfilling for the musicians that way,” Muffitt said. “It becomes very democratic very quickly. It was wonderful to see the chemistry unfold among the musicians.”

Muffitt said the experience resulted in much more than a concert for people to enjoy on line.

“It’s going to have benefits when we return as an orchestra, because it will have strengthened the musical relationships among the musicians, and that will translate when we’re all together on stage,” he said.

In a year packed with “re-imagined” seasons, Muffitt has been keeping up virtual concerts from orchestras around the world. He was impressed with the editing and technical support of the Media Center technicians.

This may be a chamber concert, but it’s not meant to be played on a phone. The high fidelity audio and fluid camerawork are best enjoyed on the biggest setup available.

“I’d match the quality with anything the big orchestras are doing,” he said.

For any performing arts group struggling to do its thing during a pandemic, virtual concerts are a way to keep audiences engaged, but perhaps more important, they keep the musicians engaged as well.

“We have to keep things coming on the horizon for them, so they have something to work for,” Muffitt said. “These are moments when they can recharge themselves and it can help sustain all of us.”