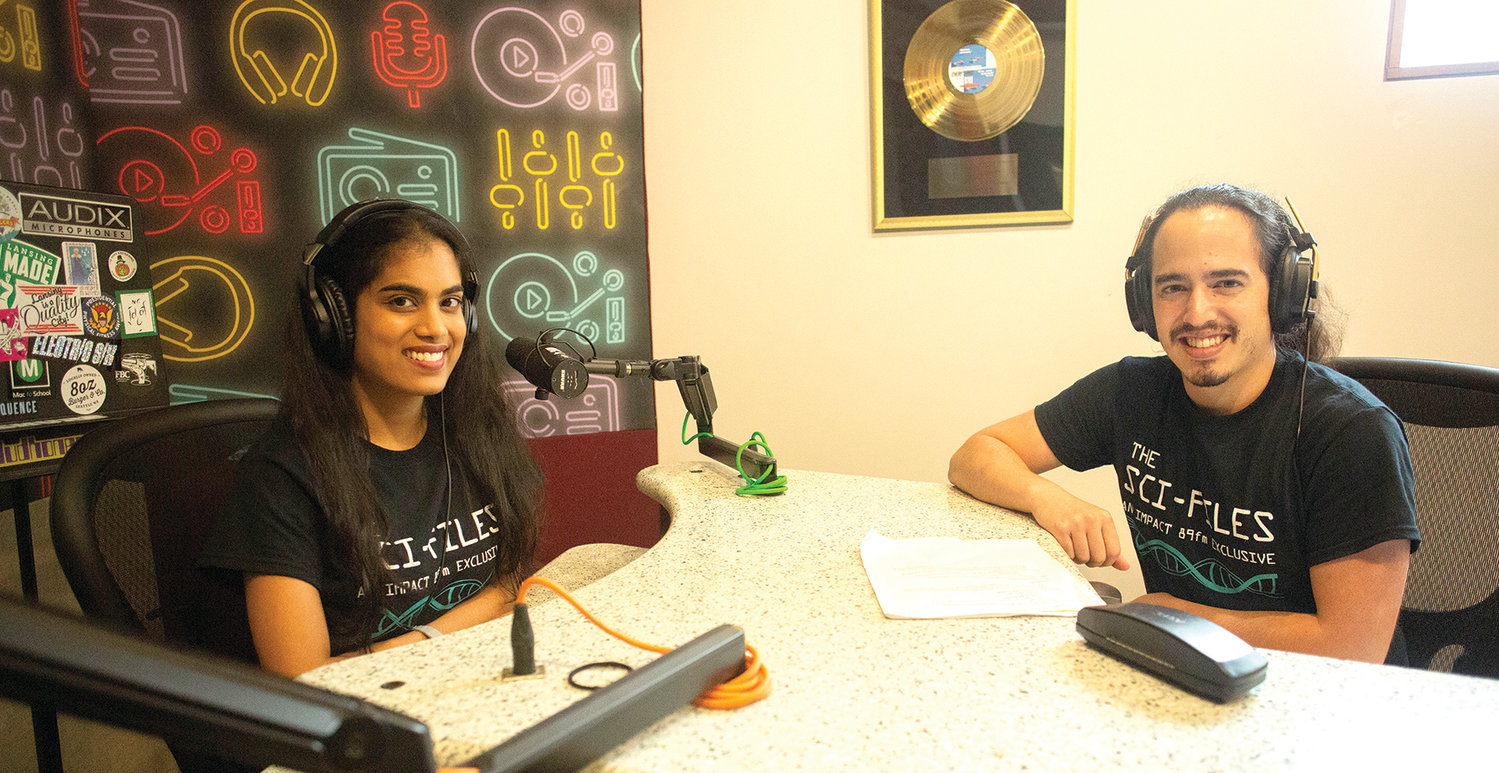 Chelsie Boodoo (left) and Daniel Puentes (right) are graduate students at MSU, as well as the co-founders of a student organization, SciComm, and Sci-Files, a weekly science podcast on 88.9 FM.
Audrey Matusz/City Pulse
Posted Thursday, October 17, 2019 9:58 am
AUDREY MATUSZ

Who starts a student organization, podcast and releases a craft beer while pursuing doctorate degrees from one of the top science research universities in the state? One would think only a superhuman mixed with a Kardashian could successfully pull this off, but Michigan State University graduate students Chelsie Boodoo and Daniel Puentes would politely beg to differ.

Saturday, Oct. 19, Michigan State University’s SciComm, a student organization exposing science majors to multimedia communication, is hosting a day full of free, interactive science and art activities on campus. Festivities will end at The Grid, the game arcade and bar in Old Town, where guests can try Boodoo and Puentes’ latest concoction, the Atomic Ale.

“Before we officially started SciComm, we received a grant from the Broad Art Lab to have a science-art exhibition,” said Boodoo, president and founder of SciComm. “When we conceived the idea to do the beer launch, we thought maybe it would be most appropriate to have the release as the finale of the whole day.”

In addition to revealing a customized beer, the day will start with solar telescope gazing at Abrams Planetarium at 11 a.m. and an art showcase at the Facility for Rare Isotope Beams.

At 2 p.m. at the Wharton Center for Performing Arts, YouTube sensation “Physics Girl,” aka Dianna Cowern, will give live demonstrations on the Great Hall stage. Cowern is known by her 1.3 million subscribers for posting educational physics videos on topics ranging from vocal tract resonances to DIY square vortex rings and has hosted  guests such as Bill Nye on the show.

Puentes is also a founder of SciComm and cohosts the podcast Sci-Files with Boodoo. Sci-Files first aired in March on Impact 89 FM, MSU’s student radio station, and has since taped 30 episodes ranging across topics such as water testing, astronomy, biological impacts of construction sites, quantum computing and the list goes on.

“Even though we are a science show, we interview people in the humanities doing research because it’s time for society to recognize that just because it has the word 'sociology' associated with it doesn’t make the work less robust or important than hard sciences.”

One evening while out for drinks in Old Town, Boodoo and Puentes found themselves in The Grid, where they started chatting up a bartender. They discovered the bar is partnered with Saugatuck Brewing Co. and creates custom beers. “We were like, why don’t we do it?” Boodoo said.

She added that at the time, they didn’t know how to tie the custom beer in with their various projects, but ended on a release party to conclude the science-art event on campus.

She said it took months of corresponding with the brewery in Saugatuck to pick out a name and taste. Over Memorial Day weekend, the podcast hosts visited the brewery, made mash and mixed in “Galaxy Hops” for a taste of bitterness.

All proceeds from beer sales will go to The Grid to cover production costs. While guests sip on the intergalactically themed pale ale, past interviewees from Sci-Files will give five-minute rundowns on their latest research findings. The talks will be followed by a game called “Beat the Scientist,” where guests can opt to battle a presenter to one of the arcade games. Prizes have been donated by Impact 89 FM and Astronomy on Tap, which is an informal presentation series by astronomers held inside local bars.

Boodoo and Puentes were pretty tight lipped on the characteristics of the beer, but assured it is safe to drink despite the name.

“It’s going to be a pale ale with a very special ingredient,” Puentes said. “I will tell you that it’s not made with radiation. That wouldn’t fly with the Nuclear Regulatory Commission.”