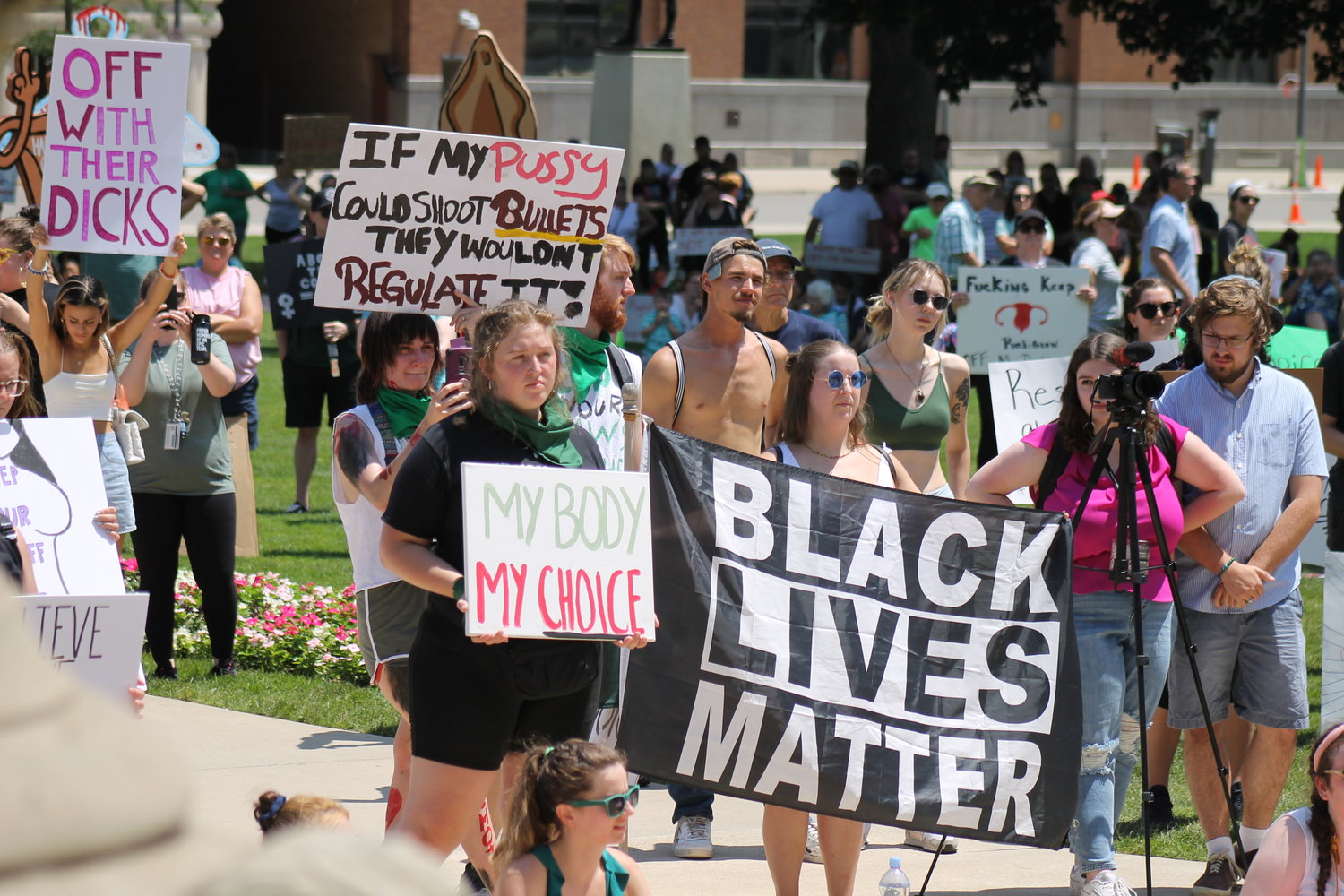 Over the holiday weekend, downtown Lansing was awash with supporters of abortion access. On Sunday, about 1,000 people marched through downtown railing against the U.S. Supreme Court decision and any attempt to reinstate Michigan’s 1931 abortion ban. On Monday, protesters blocked, then took over the annual Fourth of July parade in downtown Lansing. The event was ultimately canceled, and many who’d arrived for the parade joined protesters demanding access to safe, legal abortions without criminalization.
Todd Heywood City Pulse
Posted Thursday, July 7, 2022 12:01 am

Prosecutors in Michigan are legally permitted to decide which cases they will bring charges in and which ones they won’t. The American Bar Association Code of Conduct holds prosecutorial discretion as a key element in enforcing the law.”
Todd Heywood

“I have said, unilaterally, during my entire legal career I will not prosecute a medical provider for providing an abortion.”

“I’ve been very clear where I stand on reproductive rights during both of my campaigns,” she added. “Voters know what I stand for. If they don’t like it, they can vote me out of office.”

Siemon echoes the sentiments of other Democratic elected prosecutors in the state. Oakland County Prosecutor Karen McDonald told MSNBC she will use her limited funds to pursue serious crimes such as increased gun violence, domestic violence, rape and child abuse. Democratic prosecutors in Marquette, Kalamazoo, Wayne and Washtenaw counties are on record as stating they will not enforce it either.

The 1931 law is a felony law prohibiting anyone from deliberately causing a “miscarriage” by administration of drugs or use of instruments. It has only one exception: When the life of the mother is in jeopardy, an abortion is legally allowed. But abortions for pregnancies resulting from rape and incest are prohibited.

Reflecting national reaction by prosecutors, it’s a familiar partisan divide on the issue of abortion.

At least two Michigan Republican prosecutors have announced they will bring charges under the century old law.

Prosecutors in Michigan are legally permitted to decide which cases they will bring charges in and which ones they won’t. The American Bar Association Code of Conduct holds prosecutorial discretion as a key element in enforcing the law.

The American Bar Association Code of Ethics states a prosecutor’s primary “duty” is to “seek justice, not simply convictions.” To do that, the prosecutor should “exercise discretion” when choosing not to seek criminal charges in a case.

Gov. Gretchen Whitmer and the Democratic prosecutors want the courts to rule the law unconstitutional under Michigan’s constitutional due process and equal protection clauses. The governor initiated the suit in anticipation of the U.S. Supreme Court’s June 24 overturning the 1973 Roe v. Wade decision.

The court on a 6-3 vote that predictably reflected GOP vs. Democratic appointees — ruled there was no federal right to an abortion, and it was up to each state to determine whether and how to address abortion.

As a result, Whitmer has asked the Michigan Supreme Court to skip two court levels —  the circuit and appeals courts — and hear the case directly. No decision on that has been made.

A law from 1846 backs this up, noting county prosecutors may decide to bring charges for criminal actions. That one word, “may,” makes all the difference in the legal world because it unleashes a prosecutor’s ability to use their own discernment on how to handle cases brought to them.

Currently, the 1931 ban is unenforceable. That is because a temporary injunction was issued by the Court of Claims in May. The injunction prohibits the enforcement of the ban until, and if, it is found constitutional under Michigan’s Constitution — something Court of Claims Judge Elizabeth Gleicher determined was more likely to occur than not in issuing her injunction.

The injunction was issued in a second lawsuit seeking to overturn the ban as unconstitutional under Michigan’s Constitution. The case was brought by Planned Parenthood of Michigan against Attorney General Dana Nessel. Under the order, Nessel was to inform all people under her supervision of the injunction. According to state law, that includes all county prosecutors. Nessel sent notification by email to all the people she supervises on May 18, the day after the injunction was issued.

“As it currently stands, providing abortion care in Michigan cannot be prosecuted, and I encourage those with appointments to move forward as scheduled and consult with their doctors,” Nessel said in a statement.

But two Republican prosecutors said they will file charges under the law if presented cases.

Kent County Prosecutor Christopher Becker and Jackson County Prosecutor Jerald Jarzynka — both Republicans —announced last week they will proceed with prosecutions. Their attorney said Nessel is wrong. They are represented by David Kallman, a Delta Township lawyer involved in dozens of lawsuits related to homeschooling, LGBTQ rights and more, who said the injunction did not apply to local prosecutors.

“The state cannot tell local prosecutors what they can and cannot prosecute,” Kallman said in a phone interview last week. “That’s just ridiculous.”

Kallman did acknowledge that a 1963 Michigan Supreme Court ruling found only providers involved in an abortion can be charged under the law. “Not the mother,” he said, “She can’t face charges.”

With the legality of abortion care in the air, activists like Melinna Brann of Lansing “feel like we have no control.” She submitted a proposed resolution to the City Council seeking to get that body to reject the 1931 law. It’s unclear if the Council will take up the issue. Brann, who works with social workers in the state, said there is a significant amount of anxiety for women as well as social workers and medical providers as the future of the law hangs in the balance.

“No one knows if they can be charged for providing information about abortion, but social workers have an ethical obligation to provide that information,” she said.

“They are asking to get Plan B and birth control (prescriptions) filled early and for longer periods” because of uncertainty over how long they will be available.