Messengers from the front lines 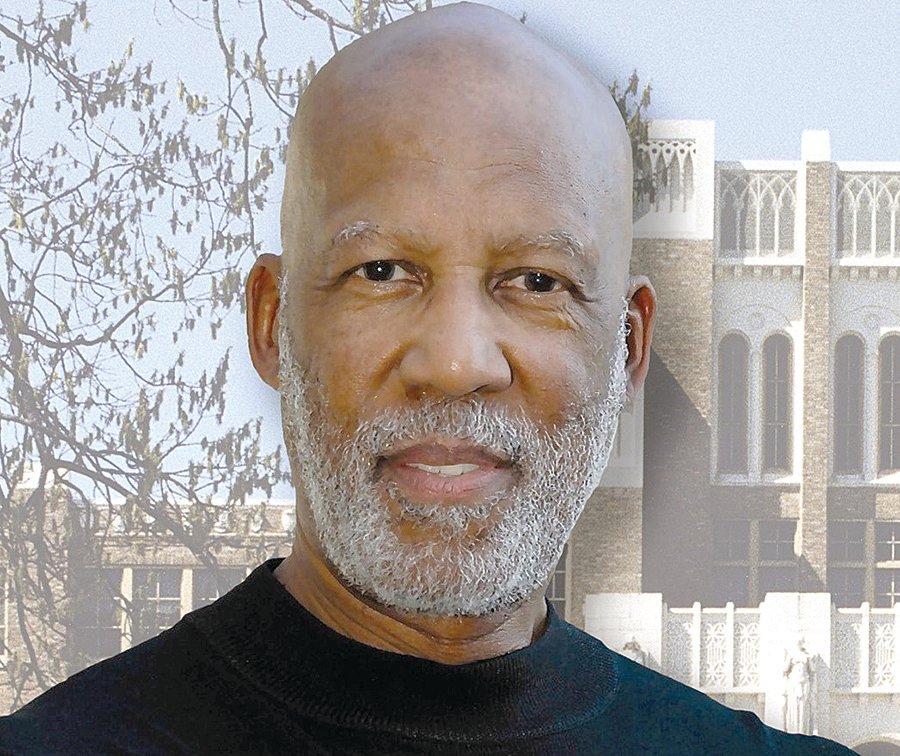 Terrance Roberts and the statue that depicts him in Little Rock, Ark.
Courtesy photos 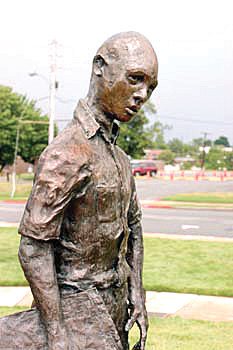 Terrance Roberts and the statue that depicts him in Little Rock, Ark.
Courtesy 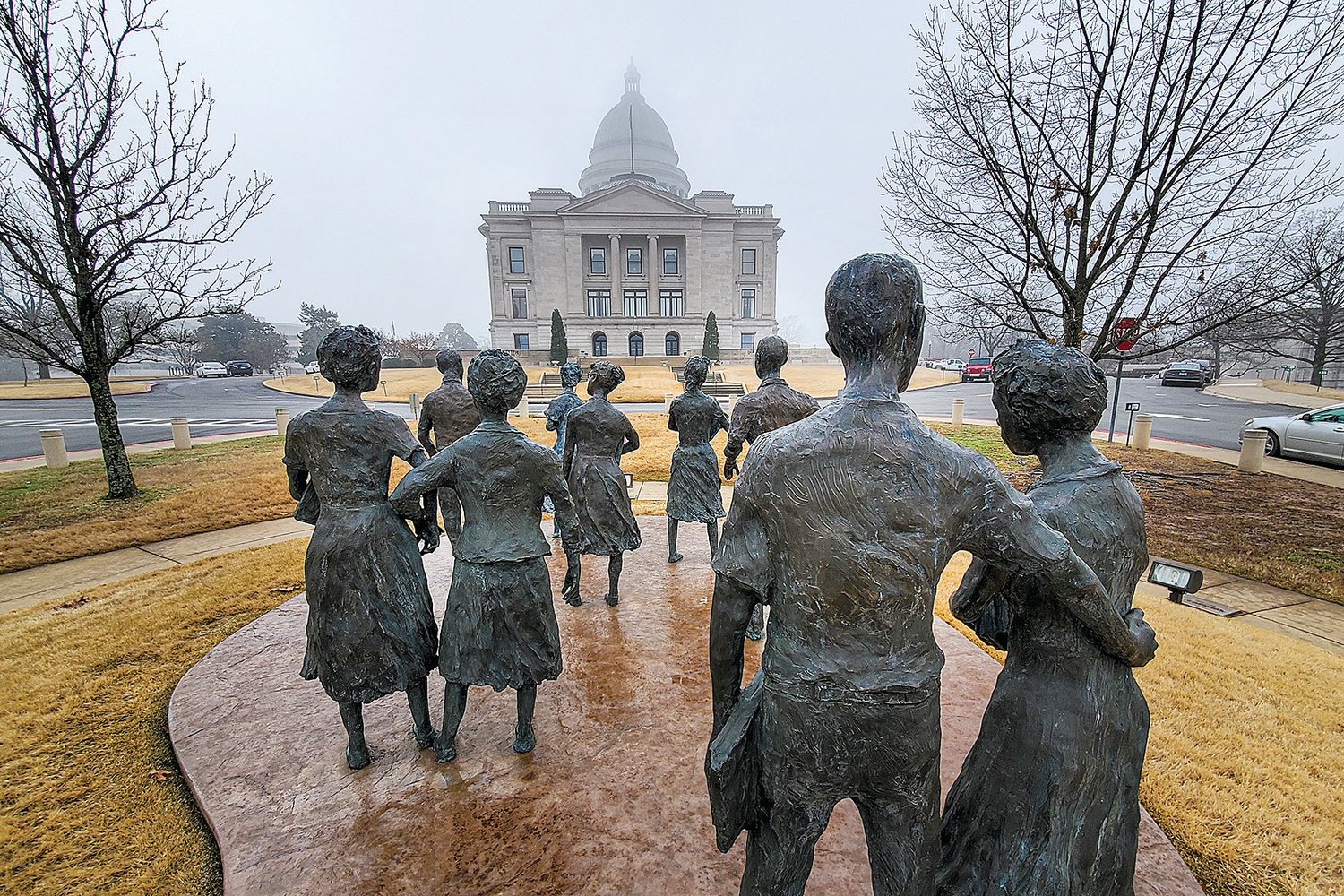 Terrence Roberts is a patient man.

In 1957, Roberts and eight other African-American students, all in their teens, ran a daily gauntlet of rage, resistance and officially sanctioned violence to desegregate Little Rock Central High School.

Four of the Little Rock Nine, as they became known, will take part in the 2022 MLK Day of Celebration Monday (Jan. 17,) sponsored by the Martin Luther King Jr. Commission of Mid-Michigan.

It took three successive attempts, and a year-long deployment of the National Guard, to keep the Little Rock Nine in school. They were beaten, kicked, harassed and burned in effigy. Their houses were firebombed and many of their parents lost their jobs.

Despite being beseeched, exhorted and even warned to learn from the past, many Americans still resist looking back on such dark days, but it’s harder to turn away when the messenger carries the historical weight of Terrence Roberts.

“Look at what those youngsters carried on their shoulders,” MLK Commission Chairwoman Elaine Hardy said. “It was right against wrong, good against evil, literally.”

Little Rock closed its high schools for the 1958-‘59 year because of the desegregation brawl. Roberts finished his senior year at Los Angeles High School, graduated from California State College and went on to a career in psychology, serving as director of mental health services at St. Helena Hospital and Health Center and co-chairing the Master of Arts in Psychology program at Antioch University Los Angeles.

His expertise in psychology comes in handy when he tells students, community groups and law enforcement agencies things they may not want to hear.

“I have to be very careful, because if I say the wrong thing, or say it in the wrong way, I will lose them,” he said. “The connection will be cut. I try to ease my way into it and bring them along, help them to understand.”

In addition to Roberts, Monday’s panel, moderated by Michigan Lt. Gov. Garlin Gilchrist, will include Ernest Green, the oldest of the group and the only student who went to Central as a senior; Carlotta Walls LaNier, the youngest of the group, who was only 14 when she attended Central; and Minnijean Brown Trickey.

Hardy finds the Little Rock Nine’s experience as relevant to the nation’s turbulent civil rights struggles as ever.

“There are still segments in our society who would deny democracy,” Hardy said.

Last week, watching coverage of the one-year anniversary of the storming of the U.S. Capitol, Hardy found the mob’s angry faces all too familiar.

“That anger we saw Jan. 6 was always there,” Hardy said. “If you look at any of the iconic photographs of Little Rock in those years, you saw angry mobs accosting those children, trying to do the basic thing we encourage every child in this country to do: go to school.”

Roberts, 80, volunteered to join the Little Rock Nine in the energizing wake of the Supreme Court’s 1954 Brown v. Board of Education decision that struck down school segregation.

In recent years, many Americans who wondered if racism was over with the election of President Barack Obama were shocked to discover how brutal the cycle of civil rights breakthroughs and blowbacks can be. Roberts knew better.

“I learned in my research that this was not unusual,”

Roberts said. “It’s always the same — one step forward, then a giant fist in your face. That’s how it’s been. I’m fairly used to it. I’m not welcoming it, but it’s the reality.”

Nevertheless, Roberts doesn’t get weary of telling his story.

“In a sense, I feel privileged, because growing up as a Black kid in Little Rock, it was Ground Zero all the time,” he said. “I had two options — to opt out altogether, focus on myself, or I could jump into the fray and see what I could bring from my perspective.”

He traces his energy and inspiration to being a “pretty committed” Christian, although he doesn’t go to church.

“I find that sometimes going to church interferes with my ability to be a Christian, but the principles are still sound,” he said.

A few years ago, Roberts was at a conference, doing work with a group of middle managers. “I gave my spiel about leadership,” he said. “During the lunch break, a guy came up to me and said, ‘You can’t fool me. That’s the Gospel.’ He nailed me. Busted on the spot.”

Hardy expects the speakers’ message to fall on fertile ground in greater Lansing.

“We are deeply honored that the community we live in embraces the ideas of Martin Luther King Jr. and pours forth its support of the MLK Commission so generously,” she said.

This is only the second time in 37 years the King commemoration will be held virtually. The event will be broadcast on TV instead of being held in person at the Lansing Center.

Hardy is disappointed that the speakers aren’t coming in person, but there is a bright side. The event usually packs the Lansing Center to its capacity of 2,200, but last year’s virtual event reached 15,000 people, and Hardy anticipates up to 40,000 viewers this year.

“If the Little Rock Nine can tell their story to more people in this format, that’s a silver lining to this pandemic,” Hardy said. “But I just hope to God that we’re able in 2023 to be back together in person.”