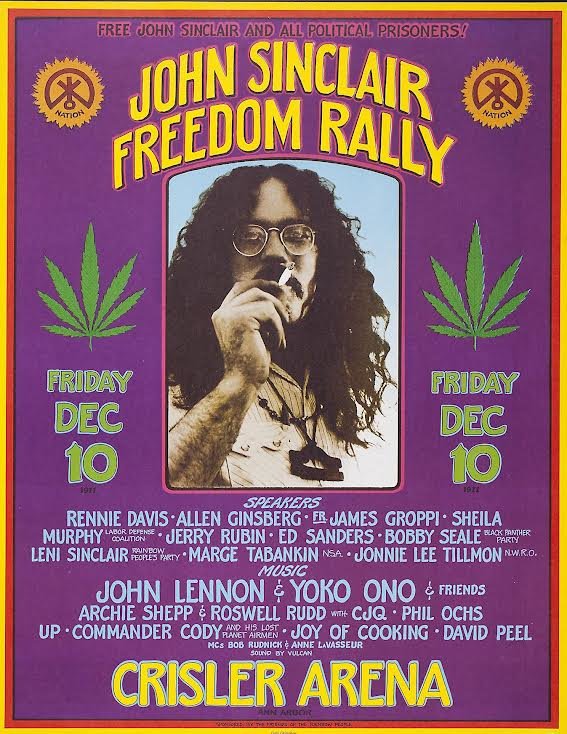 A handbill advertising the John Sinclair Freedom Rally, a protest and concert that was organized in 1971 at the Crisler Arena in Ann Arbor. The event was in response to activist John Sinclair’s 10-year prison sentence for possessing two joints of marijuana. John Lennon took up his cause.
Posted Thursday, March 17, 2022 12:00 am
Kyle Kaminski

Next month marks the 50th anniversary of Hash Bash, a now-famous statewide cannabis holiday that was first assembled on April 1, 1972, at the University of Michigan in Ann Arbor.

But while Ann Arbor always gets (and rightfully deserves) plenty of credit for its role in advancing cannabis reforms in Michigan, I’m here this week to mark a lesser-known blip on the timeline and make a case for the city of Lansing as the home of the state’s original Hash Bash.

A few months before that iconic 1972 event in Ann Arbor, famed activist John Sinclair had been released from prison after the Michigan Supreme Court declared unconstitutional the law that was used to craft a 10-year prison sentence for offering to sell two joints to an undercover cop.

The ruling, an obvious win for Sinclair, was also pretty sweet for the rest of the stoner public.

Because the state laws that criminalized the possession and use of marijuana were deemed unconstitutional, the whole state — if only for a few short weeks — was stuck in this strange sort of legislative limbo where it had become totally legal to both possess and smoke pot.

Hash Bash was both a celebration of Sinclair’s release as well as a protest of soon-to-be enacted replacement laws that would go on to make pot illegal again for a few more decades.

About two weeks earlier, however, was a lesser-known but no-less-important milestone in state cannabis history, what some now affectionately remember as the state’s original Hash Bash — right on the front steps of the State Capitol building in downtown Lansing on March 15, 1972.

A reader who said he participated in the event, Stephen Magnotta, first brought this little slice of cannabis history to my attention last month as the 50-year anniversary of the event approached. And as much as we both love Ann Arbor, we thought Lansing deserved some credit here too.

About three dozen “young people” — including Magnotta — arrived on the Capitol steps that afternoon to smoke “what they said was marijuana,” the Lansing State Journal reported. After getting stoned in the sun, they eventually meandered inside the Rotunda. Some kept puffing down pink and yellow hand-rolled joints. Magnotta remembers it being some really crappy weed.

“We’re not going to overreact to it,” a Michigan State Police officer told a State Journal reporter at the scene. “You and I both know there isn’t enough real stuff there to stick in your eye.”

Magnotta said he came to the Capitol that afternoon after hearing about the gathering from his stoner friends. There was no formal sponsor or leader, though one of Magnotta’s friends wore an Uncle Sam costume and somehow became seen as the group leader as a result, he said.

“After some time outside smoking, most of the crowd moved into the Capitol Rotunda and passed around more joints, enjoying some of that era's lovely brown weed under that grand stained-glass sky, surrounded by police,” Magnotta said. “It was surreal to be standing 2 feet from a row of cops while smoking pot, and then getting high under the stained-glass rotunda.”

Magnotta said Lansing was in a different era back then; long-haired hippies would get beat up for being in the wrong place at the wrong time. Culture wars often got physical, he remembered.

“Back then, you could get sucker-punched by a redneck just for having long hair,” he recalled. “We wanted to publicly demonstrate to people in power how harmless marijuana was, during that legal period. So, the real first Hash Bash was actually not in Ann Arbor. It was this event — where we all stood up right in the home of the legislators who were still making cannabis illegal.”

Magnotta said he and his friends, unfortunately, didn’t take any photos that evening. The Lansing State Journal’s coverage also didn’t include pictures. It’s unclear whether anyone took photos at all — making documenting this milestone a bit more challenging than Hash Bash. But before you pack up for your annual trip to Ann Arbor next month, don’t forget that Lansing played a pretty interesting role in cannabis activism history too. You’ve just never heard about it.

Added Magnotta: “I love Ann Arbor, but one thing it shouldn't claim is the first Hash Bash. That moment in pot history happened here in the Capital City, in the belly of the beast that had just passed a reform law that still sent thousands of people to jail for simple possession of a plant.”