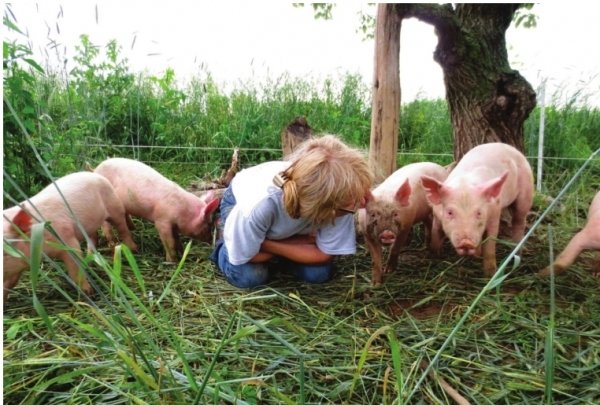 Posted Wednesday, January 22, 2014 12:00 am
Laura Johnson
It’s a little-known fact that pigs, like birds, build nests for their young.

“This is what they want to do when they give birth,” said Laurie Thorp, a professor in Michigan State University’s Department of Community Sustainability and director of the Residential Initiative on the Study of the Environment program. “They don’t want to be on a concrete floor in an 8-by-3-foot stall.”

Learning this fact six years ago was what Thorp calls her “ah-ha moment.”

“It blew my mind,” she said. “And then I went on to learn about pigs and how incredibly smart they are. They’re our smartest livestock animal and yet, for me, some of their housing conditions are problematic.”

From here, Thorp gave birth to an idea that would become the MSU Student Organic Farm Pastured Pig Project. Founded in 2010, it’s the first alternative system of animal husbandry being practiced at a land grant institution.

“We have pigs in an intensive method on campus,” Thorp said. “But I knew then that I wanted to have an alternative to that system, where students could learn about swine production in a different way … in which pigs could express some of these behaviors that they’re not able to express in an intensive system.”

An intensive, or industrial, system is one in which pigs are confined and concentrated indoors, reliant on modern equipment and heavy investments in infrastructure, explained Dale Rozeboom, MSU extension specialist and professor of Animal Science. An extensive or alternative system, on the contrary, requires few resources, little infrastructure and brings animals into broader farm production.

In pursuit of the latter, the Pastured Pig Project moves a few sows (adult female pigs) from the intensive swine farm on campus to the Student Organic Farm each spring, where they give birth to their babies naturally. The pigs are then incorporated into the workings of the farm.

“(The project) is a way for us to show others how pigs can be integrated into a cropping system,” said Lexi Hinson, MSU sophomore zoology major and Pastured Pig Project volunteer. “Farms can become a cycle, rather than separate as you see in industrial agriculture.”

Such a cycle is artfully designed to make use of pigs’ natural tendencies, rather than restricting them, in order to produce rich crops, soil and meat, all within a low-input, small-scale and co-beneficial system of organic production.

“This (is a) beautiful way of bringing animals back to the land and allowing them to exhibit their natural behaviors for the benefit of the land,” Thorp said. “We rotate them into our fields and they do this wonderful work for us, eating the stubble, adding organic matter, even controlling weeds.”

What is otherwise wasteful becomes productive and beneficial, said Samantha Noll, a philosophy graduate student at MSU who studies animal ethics and agriculture. “Rather than their manure being wasteful, it becomes (fertilizer) for the soil,” Noll said. “It’s not just making them happy — we put them to work. But they’re happy too, because it’s actually allowing them to be pigs.”

“We’re looking for solutions that offer long-term sustainability in the varied extensive and intensive situations,” he said. “We’re taking elements from alternative and industrial systems and blending them.”

Having both types of systems accessible on campus offers a chance for students and the general public to experience both and come to their own conclusions.

“They can begin to deliberate and think for themselves about the social, environmental and economic remove tradeoffs,” Rozeboom said. “We’re motivated by engaging students with varied perspectives that easily bring them into discussion about long-term sustainability. The goal is really to create a place at MSU where we can discuss these things.”

Such first-hand experience is crucial in establishing this sort of productive discussion because it takes what is otherwise an abstract discussion and contextualizes it.

“So many people these days don’t have a direct connection to where their food comes from,” Noll said. “So when we talk about things like food or agriculture or animal ethics, they don’t have a point of reference.”

She emphasized the importance of looking beyond organic and non-organic labels to see how animals are treated.

“All agricultural systems are built with different values prioritized,” Noll said. “So what does an agriculture look like that values welfare over cost benefit? I think this project really helps people see it.”

Students and the general public are welcome to visit the pigs by taking a free tour of the farms; students interested in a longer-term commitment are invited to become Pastured Pig Project volunteers.

“The project gives people the opportunity to meet their meat,” said Hinson.

“They can see how the pigs are living, what they’re eating, where they’re sleeping, to see the pigs play, which is so important because pigs are such social animals. Our system gives them the opportunity to play.”

The pigs live on the farm until late fall when the young pigs are processed for certified organic meat and the sows are placed with local farms interested in using this kind of alternative system.

The organic meat is purchased by campus restaurants or by community supported agriculture members, but the general public can also buy meat when available. There are also ongoing fundraising initiatives: Pastured Pig Project calendars, magnets, pins and key chains are available year-round for purchase. Thorp says her biggest hope is that the project might help change the way we view animals, agriculture and food.

“We’ve got to change the way we inhabit this planet, and the food system is responsible for a very large portion of our impact,” she said. “You cannot be a part of this project without gaining a greater appreciation of where your food comes from.”

To get involved or be added to a list for meat purchases, contact Laurie Thorp at thorpl@msu.edu, Lexi Hinson at hinsonal@msu.edu or visit msuorganicfarm.com.