Schor: No intention to cause ‘discomfort and turmoil’ 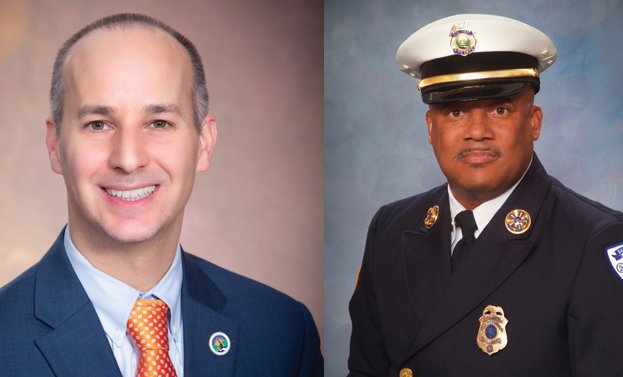 “I apologize for the discomfort and turmoil that you expressed that you experienced in the time that you served as fire chief in the city of Lansing under my administration,” Schor wrote. “It was not my intention for this to occur, but I will take you at your word that it did, and I regret this and take the blame for this happening.”

Talifarro said Schor’s apology “may be a little over the top” for his comfort, but appreciated the gesture. He contended his concerns were not about his ego, but rather on “issues much larger than that.” He offered to meet with Schor and the NAACP, noting he would refrain from any further communications until that meeting.

Talifarro wrote an open letter to Schor last week, noting he only quit last year when the workplace became “extremely uncomfortable” after former Mayor Virg Bernero left office. He warned the mayor about a need to further bolster diversity among city employees and criticized steps Schor announced he is taking to broaden inclusion efforts after he left.

“I call on you to set the example,” Talifarro wrote to Schor, questioning why incoming Chief Michael Mackey, who is white, was hired without interviewing a single minority candidate for the job. Talifarro is black.

“It is disappointing, to say the least, and it says a great deal about your concept of inclusion. You have a responsibility not to be blind to these matters.”

Schor said no qualified minorities applied. He expressed his disappointment at that and that the most recent class of firefighters was all white men expressed for one person he said is Latino. That has prompted a renewed emphasis on diversity in hiring, which Schor laid out in a policy statement a week ago.

After a recent meeting with the local chapter of the National Association for the Advancement of Colored People, Schor noted it was never his intention to “misrepresent” Talifarro. He apologized to him for “any statements that I have made or actions that I have taken to misrepresent you and your hard work.”

“You are clearly a very experienced and dedicated public official, and I thank you for your service. My intention is now, as it has always been, to have the very best Lansing Fire Department that we can have,” Schor said. “I know that it is important to field a qualified fire department that is diverse and represents the citizens of Lansing.

“This is not a commentary on the actions of the past, but is a chance to be better for the future.”

Schor came under fire earlier last month when Talifarro — as well as former Assistant Chief Bruce Odom — criticized the shifting hiring practices. Odom contended the changes only helped to bolster racial tensions in the department. He pointed to a “cultural issue” stemming from a “good ol’ boys” type of atmosphere in the city.

“Is racial discrimination a part of that? Yes. That’s all part of it,” Odom previously explained to City Pulse.

Schor said the priority was placed on hiring licensed paramedics over diversity last year after a staffing shortage loomed on the horizon. The Fire Department needed those skilled professionals in order to legally complete high-priority medical calls.

The results weren’t ideal, Schor emphasized, but they were necessary. Talifarro set a focus on on-the-job training over credentials — allowing a more diverse array of local residents to be hired at the Fire Department.

Talifarro also claimed Schor had “pre-judged” or “completely disregarded” Fire Department personnel as well as other, outgoing African-American department heads that had previously served under Bernero. Talifarro contended those employees needed to be treated with more “dignity and respect” on their way out the door.

Schor maintained that diversity has always been an integral focus for his administration — not just for race, but for gender and sexual orientation as well. And the statistics reflected that inclusion. Several officials within Schor’s administration identify as a member of a generally underrepresented, minority population.

Under Schor’s new policy, the city is looking to bring in both paramedics and lesser-trained EMTs. A cadet program for firefighters is also designed to engage local, prospective employees at an earlier age. The city will also continue its Youth Leadership Academy.

Despite continued objections from Talifarro over the efficacy of those programs, the city’s newly implemented and proactive steps should help alleviate concerns of racial disparities in the future, Schor emphasized. The goal: target a more diverse population for employment opportunities and train them to meet the qualifications.

Advertisements for open positions will also be posted in prominent, black-oriented local newspapers like the Chronicle News and the New Citizens Press. Schor is also working to identify future scholarship opportunities.

Letter from Schor to Talifarro:

I have received and read your emails.

I also apologize for the discomfort and turmoil that you have expressed that you experienced in the time that you served as Fire Chief in the City of Lansing under my administration. It was not my intention for this to occur, but I will take you at your word that it did, and I regret this and take the blame for this happening. You served six years as Fire Chief in Lansing, and accomplished many things here in Lansing. And you continue to serve and accomplish many things as Chief in East Lansing. You are clearly a very experienced and dedicated public official, and I thank you for your service.

My intention is now, as it has always been, to have the very best Lansing Fire Department that we can have. On behalf of all of the citizens of Lansing, I know that it is important to field a qualified fire department that is diverse and represents the citizens of Lansing. I plan to move forward with the action plan that I have put out to the public, and I also plan to engage with all of the diverse communities within the City of Lansing to see what other measures and steps can be taken to ensure great service from a department reflecting our citizens.

This is not a commentary on the actions of the past, but is a chance to be better for the future. If you would like to be part of this effort, I welcome your comments and opinions. If not, I completely understand and respect that as well.

I would like to meet with you one-on-one at any time. You are welcome in my office, or I can come to your East Lansing office to do this. I hope that we can get together to continue to ensure that Lansing has one of the best fire departments in the state of Michigan.

Response from Talifarro to Schor:

Thank you for your acknowledgment and your apology. In fact, it may be a little over the top for my comfort. This was never about my ego. It was, and is, about issues much larger than that. I am going to contemplate some things for now, before I make any decisions. However, I will accept your offer to meet; and I will meet with the NAACP as well. And, until those meetings have been coordinated and taken place, I will refrain from further communications.