In the battle against Rick Snyder, Democratic gubernatorial hopeful puts his eggs in the social media basket 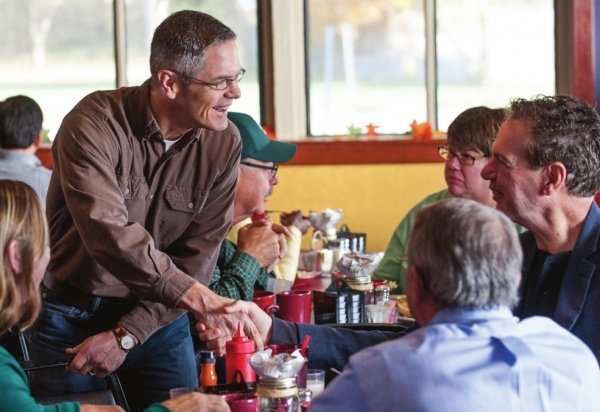 Posted Wednesday, June 11, 2014 12:00 am
BECKY McKENDRY
In his battle against incumbent Republican Gov. Rick Snyder, the Democratic gubernatorial candidate is being outspent and dealing with name recognition and favorability deficits in the polls. But he has swirled up a storm of online attention, thanks to his campaign’s targeted use of social media. The 52-year-old former congressman from Battle Creek boasts over 30,000 Facebook fans and over 4,200 Twitter followers, thanks to a humorous approach that makes his online persona seem more at home on a Buzzfeed list than a stuffy politician’s website.

One of his campaign’s favorite ways to generate online buzz is by creating memes — images or photos typically accompanied by catchy or humorous text that spread quickly through Internet channels — on Facebook.

Although memes can be generic (think any old picture with a caption), the Schauer campaign has injected some added pop culture value into their Facebook memes by using some of the Internet’s favorites. It has riffed a well-known meme called Condescending Wonka, which has circulated through websites for about three years. It features a screenshot of a, well, condescending-looking Gene Wilder from the movie “Willy Wonka and the Chocolate Factory.” The image is accompanied by a snarky caption, like “Oh, you ordered a salad at McDonalds? You must really care about your health.”

“Oh, you voted for Snyder in 2010 because he was a nerd? Tell me more about how he cut $1 billion from education.”

“Sometimes campaigns are like everything else, you can take yourself too seriously,” Schauer said. “But when you have a fresh approach and you’re being creative and tongue-in-cheek, it can be very appealing.”

Schauer credits this youthful, sarcastic social media voice with allowing him to introduce himself to Michigan voters. He shares photos of his stops at local burger joints, references his upbringing in Livingston County and jabs that he “was one of the smallest offensive linemen you’ll ever see play high school football.”

“When I’m at a college campus, and people who I’ve never personally met before know who I am and want to have their picture taken with me, that is a reflection of the power of social media,” Schauer said. “I feel it in my visibility, even in non-campaign events. I’ve been in gas stations while crossing the state and people know who I am. I am a believer.”

At the beginning of his campaign last May, an EPIC-MRA poll showed that only about 25 percent of Michigan voters knew who the former congressman was.

Now hovering at about 60 percent, the name recognition deficit has closed somewhat, but Schauer is struggling with a dismal favorability rating — just 14 percent in the latest poll. Snyder is at 46 percent.

Still, Schauer seems satisfied with his strategy so far. “Humor is kind of a way to get your foot in the door,” he said. “The fact that it is a little bit different proves the point. People are looking for fresh ideas and fresh approaches, and this is the personality of our campaign. We’re creative.”

As Schauer’s communications director, Pohl, 29, doesn’t pull any punches about his approach. He admits that handling Schauer’s social media strategy isn’t high-brow wordsmithing. And he recognizes that, in large part, plugging silly and sarcastic sound bites into a free generating website isn’t exactly writing a State of the State speech.

But it is relatable, he said.

“We’re communicating in a language of the Internet,” he said. “It’s something that people are familiar with.” Particularly, Pohl. As the former executive director of the liberal advocacy organization Progress Michigan and a blogger at MichiganLiberal.com, he said he learned the value of bringing flair to social media.

“Often, candidates will post links to stories or videos or canned talking points, and the problem is that users see those things and their eyes glaze over,” he said. “They keep scrolling. But if you can package and deliver a message in a way that’s a little funny and offbeat, they’re more likely to click the link and share.”

“It’s a matter of meeting people where they’re at and delivering a message the campaign wants to amplify,” he added.

The amplification appears to be working. Schauer’s campaign Facebook has almost twice the likes — at about 30,000 — that Snyder’s campaign page has. Snyder’s official governor’s page, which has to steer clear of all campaign activity, boasts the most at over 50,000.

But these days, comparing likes is old news — it’s all about interaction. There is a particular metric on Facebook known as “People Talking About This.” At any given time, it tracks how many people are interacting with an individual site and its content through liking or sharing posts, commenting on posts and pictures and mentioning the page on their own. In a nutshell, it shows the percentage of Facebook fans that aren’t just glazing over the user’s content.

Although it fluctuates based on when the statistic is checked, the degree of fans interacting on both Snyder’s campaign and governor pages typically hover in the single digits, around 4 to 8 percent. Schauer’s usually clocks in at about 45 to 50 percent, which he credits to his unrelenting commitment to promotion.

“I promote Facebook with every audience,” he said. “Everywhere I’m at on the stump, I always ask how many people have friended me and liked my posts, with every audience. When I’m attending events, I always have folks that want to have their photos taken with me and I’ll ask them, ‘Are you putting that up on Facebook?’”

If Schauer’s push for digital relevancy seems a familiar, it’s no fluke. He models his campaign after that of President Barack Obama, whose 2008 presidential campaign exploited the intersection of politics and digital media.

“President Obama showed us the way,” Schauer said. “I’ve committed to everyone that I’ve talked to in regards to my campaign that this is going to be the most sophisticated midterm campaign that Michigan has ever seen, and the use of social media is one of the reasons why and how.”

Not cheap, but cheaper

Schauer may have a strong digital presence, but it’s certainly not by accident. Campaign records show that since its inception, Schauer’s campaign has spent about $140,000 for online advertisements, website developments and digital strategy services.

As for the success of his Facebook content, more than $31,000 of that $140,000 has gone to the social networking site to amplify his content. Facebook charges for advertisements, promotion and a service they call “boosting” posts, where an account holder can pay to have content show more prominently in people’s news feeds and reach more people. The more you pay per post, the further your message travels.

Schauer and Pohl like to pose a particular scenario when they want to sing the praises of social media investment. The thinking goes like this: Including postage, a campaign mailer would cost at least 35 cents to send. Take one of the campaign’s best performing memes, which jabs at Snyder taxing seniors. Pohl said their Facebook statistics show that post reached about 487,000 people.

Assuming that number is correct, if they were to send that meme in a mailer to that many people, it would cost about $170,000.

“When you consider the number of views you can get online, that can be hundreds of thousands of dollars in attention,” Pohl said. “It’s an incredibly cost-effective way to spread a message. It’s reshaping how campaigns think.”

Cost control is important to the underdog Schauer campaign. Campaign finance filings with the Michigan Secretary of State show Schauer’s ending cash balance at about $1 million, compared with Snyder at $4 million.

Although Snyder has paid around $75,000 for Internet advertising, his campaign records show he has paid just $1,863 for Facebook. Nevertheless, Emily Benavides, Snyder’s campaign communications director, maintains that the governor’s online presence is substantial.

“We’re using Twitter, Facebook and LinkedIn and we have graphics,” she said. “As for engaging with our followers, we keep them up to date on what the governor is up to on a daily basis.”

“It’s being done in a way that we haven’t seen before with Rick Snyder,” she added. “We’re proud of what we’ve done.”

Benavides also said that the campaign soon plans to “launch an additional tactic” in regards to their social media, although she would not elaborate. “In the coming weeks and months, you’ll see how the use of social media evolves.”

“Snyder is defending, he’s the reigning champ,” he said. “He does not need to invest in social media like Schauer’s doing right now.”

Swanson said that these days, most candidates need to hire digitally savvy communications experts and come up with a memorable social media plan like Schauer has “or they’re going to get killed.”

“You can’t get the same reach you used to without paying,” he said. “What’s true in social media is true in all advertising.”

But for Snyder, Swanson said, he’s just not against the ropes right now.

“Snyder has barely even mentioned Schauer on social media, and he doesn’t have to,” he said.

Although Schauer’s name recognition has improved, he has still not usurped Snyder’s lead since his announcement, even as the governor’s approval dips.

Credit can also go to the tried and true use of television. Snyder has spent about $695,000 with the media firm Smart Media Group for television advertising and around $460,000 with Strategic Perception, the ad agency behind Snyder’s “One Tough Nerd” commercials.

It’s not over for Schauer, though. PO- LITICO reported recently that the Democratic Governors Association has reserved $6 million in television advertising for Schauer in October.

“It all goes back to the advice that they gave soldiers in the Revolutionary War,” he said. “Don’t fire until you see the whites of their eyes. Wait until the right moment to strike. And that’s after Labor Day.”

DiSano said that because voters aren’t making decisions this far away from the November election, Schauer is saving money by not advertising on TV now. Instead, he said, Schauer has been “stealthy and under the radar” in mobilizing people online.

He believes it’s a winning formula for the Schauer camp.

“It’s incredible,” DiSano said. “I don’t think social media is a substitute or a replacement for traditional advertising, but it’s getting very critical in campaigns. The value it adds is amazing.”