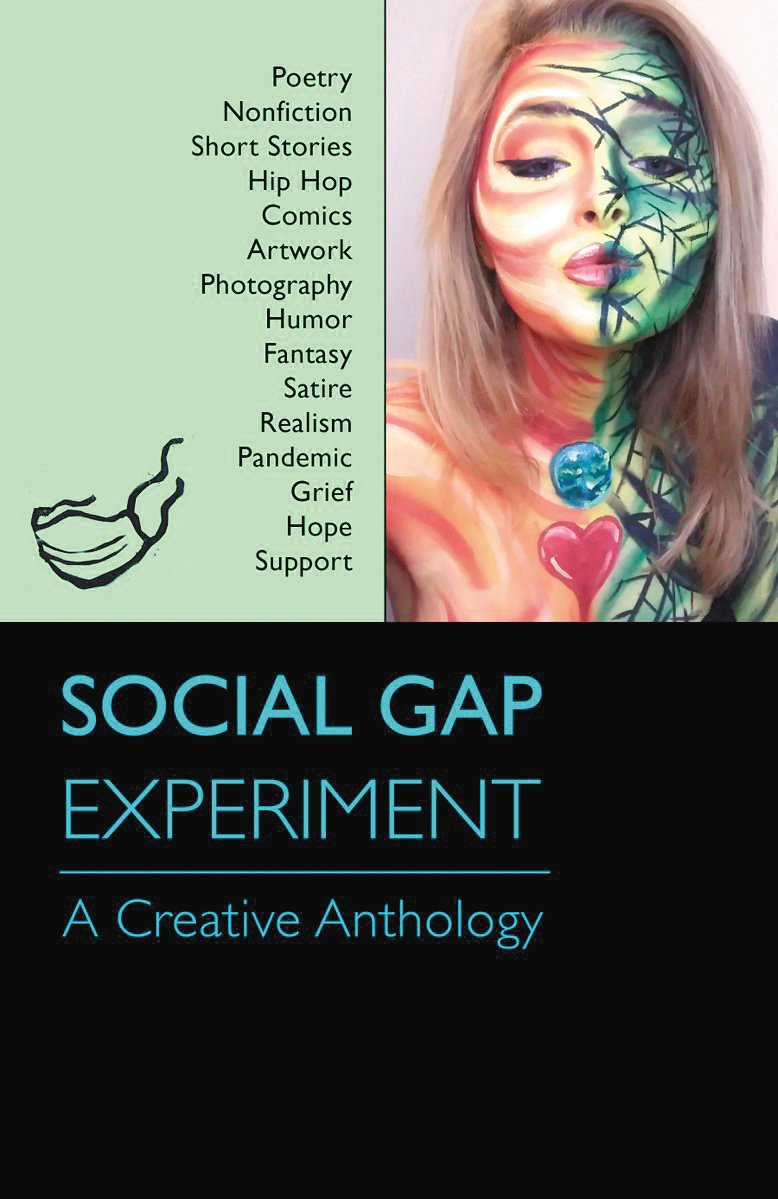 A common misconception is that writers work in seclusion, toiling away in an unheated garret, quietly turning out 5,000 words a day. That isn’t really true. In fact, writers can be gregarious social beings and the pandemic shut the door on most of their face-to-face social interactions.

Local writer Melissa F. Kaelin concluded a different response was needed, and she decided to experiment with social media to connect with other writers and creatives while social distancing.

The result was the Social Gap Experiment, which started with a series of live interviews on Facebook with authors.

It soon morphed into a project to create a literary and arts anthology by calling for submissions online. Kaelin served as the editor and publisher.

“Amazingly, we received 42 submissions, and my goal was to accept everyone’s work,” she said. “The goal was simple: How can we get poets and fiction writers published?”

The result is a 121-page anthology aptly named “The Social Gap Experiment,” which features the work of published and unpublished writers accompanied by original art and photography. Local artist Sarah Andrews’ cover art is quite spectacular.

The anthology is dedicated to Lansing writer Dwayne Sorter, who died unexpectedly this past year. A piece of his flash fiction, “Primal Man,” is included in the anthology.

Kaelin said when she arrived in Lansing two years ago to work in media communications at Michigan State University, she was inspired by Sorter’s readings at local events.

Although the request for submissions didn’t require a theme, what emerged, according to Kaelin, were stories and poetry that focused on “loneliness and isolation.”

“I was so impressed with the work. We did ourselves a service not having a theme,” she said. “The fiction is poignant, and captures the human experience of love and regret.”

It’s here that Kailin paused to make the point that “the book is a great gift for adults.” Local writers like Rosalie Sanara Petrouske, Bill Blanchard, Robert Nelson and Mary Fox contributed the vast majority of the work.

One question in the submission form asked the writers and artists to explain why they were inspired to submit their writing. Artist Donald Tredinnick said, “I became interested in the project when I heard that proceeds would be going to charity.” Tredinnick, who owns Frozen Hiker Photography in Savage, Minnesota, had his photograph “Wigwam Hotel” published in the anthology.

“Especially during this pandemic, donations across the board are down as many people are struggling due to lost jobs, reduced wages, and general uncertainty. This is a great way for the arts community to give back,” he said.

The Social Gap Experiment anthology features many talented authors and artists who create poetry, fiction, nonfiction, art and photography. All proceeds from book sales will be donated to support those who have lost wages or faced other hardships in the global pandemic according to Kaelin. Additional donations may be made online at: www.GoFundMe.com/social-gap-experiment

Author Sarah Murphy Smith, a Lansing playwright who contributed the poem “Mama” to the anthology, said, “I believe we as the human family need each other and must find new ways to stay connected in this fragile world.”  Murphy Smith’s poem speaks to the tragic death of George Floyd.

“I am excited to participate in this project because creativity and literacy are antidotes to hate, suffering, exclusion and social injustice,” said Melissa Grunow, who writes fiction and nonfiction in East Peoria, Illinois. “I decided to submit a short story, ‘Mona,’ to this collection because it has an underlying theme of hope and confronts unexpected hardships and change.”

Grumow’s short story is a touching look at how a young woman and her friend Rachel approach the news of a surprise pregnancy.

Since moving to Michigan in 2018, Kaelin has become active in many writing groups and performance events including the Poetry Room, Fiction 440, the Artist’s Umbrella, the Lansing Poetry Club and the REO Town Reading Series.

“There are many talented creators who perform their work on stage and at the mic. I have a great appreciation for the talent in Michigan’s capital city and in mid-Michigan,” she said. “This was a great pandemic project, and for me it was a challenge in personal growth.”