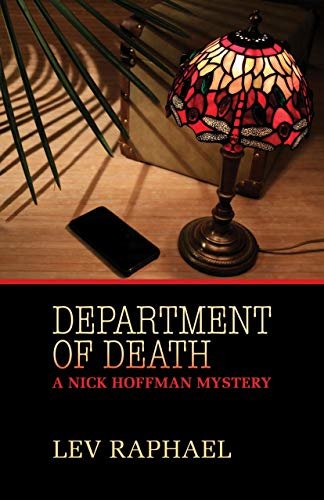 Okemos writer Lev Raphael has once again mined the academic community, which he knows so well, in his 10th novel featuring amateur detective Nick Hoffman. The department Hoffman now heads has seen so many murders that it is called the “department of death,” which also serves as the book’s title. Although Raphael spent six years as a professor at Michigan State University, the fictional State University of Michigan is an amalgam of universities.

In “Department of Death,” Hoffman has just been elevated to interim chair of the university's English and creative writing department when a student tells him in confidence that his parents paid a $250,000 bribe to get him admitted.

Unsurprisingly, Hoffman and his husband, Stefan Borowski, find a dead body on the campus of SUM soon after. Hoffman, who had been heard arguing with the murder victim shortly before his death, becomes a primary suspect.

If bribery wasn’t enough for SUM to deal with, the university’s administrators have adopted a surveillance environment where students and faculty are tracked through email, listening devices and online apps.

“The book’s themes are in essence ripped from the headlines,” Raphael said. “These are hot topics in higher ed. Lots of schools have implemented polices where students are observed and tracked. So why not track faculty? We live in a surveillance state to begin with, so of course it would also be taking place in higher education.”

“I was absolutely inspired by reading articles on the admission scandals, and thought this would be a great basis for a murder mystery. It had greed, larceny — it just grabbed me,” Raphael added.

As he has done in his previous Hoffman mysteries, Raphael has taken what he calls “the high-minded goals of higher education faced with dirty reality” and turned it into an engaging whodunit. Raphael also has the knowledge to create an erudite mystery by dropping literary tidbits throughout the book. When faced with the reality of doing the right thing and reporting the alleged bribe, Hoffman quotes a Hart Crane poem: “I am not ready for repentance, nor to match regrets.”

“The wildest things you can imagine happen in academia. The book is a satire taken to the extreme,” Raphael said.

Raphael, who retired from full-time teaching at Michigan State University, has not let moss grow under his feet. He now spends his time mentoring writers through his online portal writewithoutborders.com.

“You get to work with writers intently, as opposed to having 25 students in a creative writing class; you can provide more input. I always enjoyed teaching — it was a blast, but you can see more progress online and you are free from the policies of the university,” Raphael said.

The author said he is always studying. He has learned Swedish, Dutch and is taking voice lessons. He is also brushing up on his German for a posting at the University of Leipzig as a Picador Guest Professorship for American Literature.

Raphael said this is likely his last Hoffman mystery, but he’s said that before.

“Every good writer finds a world they can write about, and the SUM mysteries are just a different form of the classic closed world theme where you can learn its secrets,” he said.

In “Department of Death,” Raphael may have taken some of the absurdities to the extreme but he has woven some academic hot buttons, such as using social media to harass people, into an engaging mystery.

For those who want to read more by Raphael, he has written some superb nonfiction, including “My Germany,” which is about being the son of a Holocaust survivor. He also has written extensively about gay and lesbian issues. In 2010, the MSU Library Special Collections acquired a complete collection of manuscripts, letters, fan mail and everything else connected to his long writing career.

“They even have the short story I wrote in second grade,” he said.