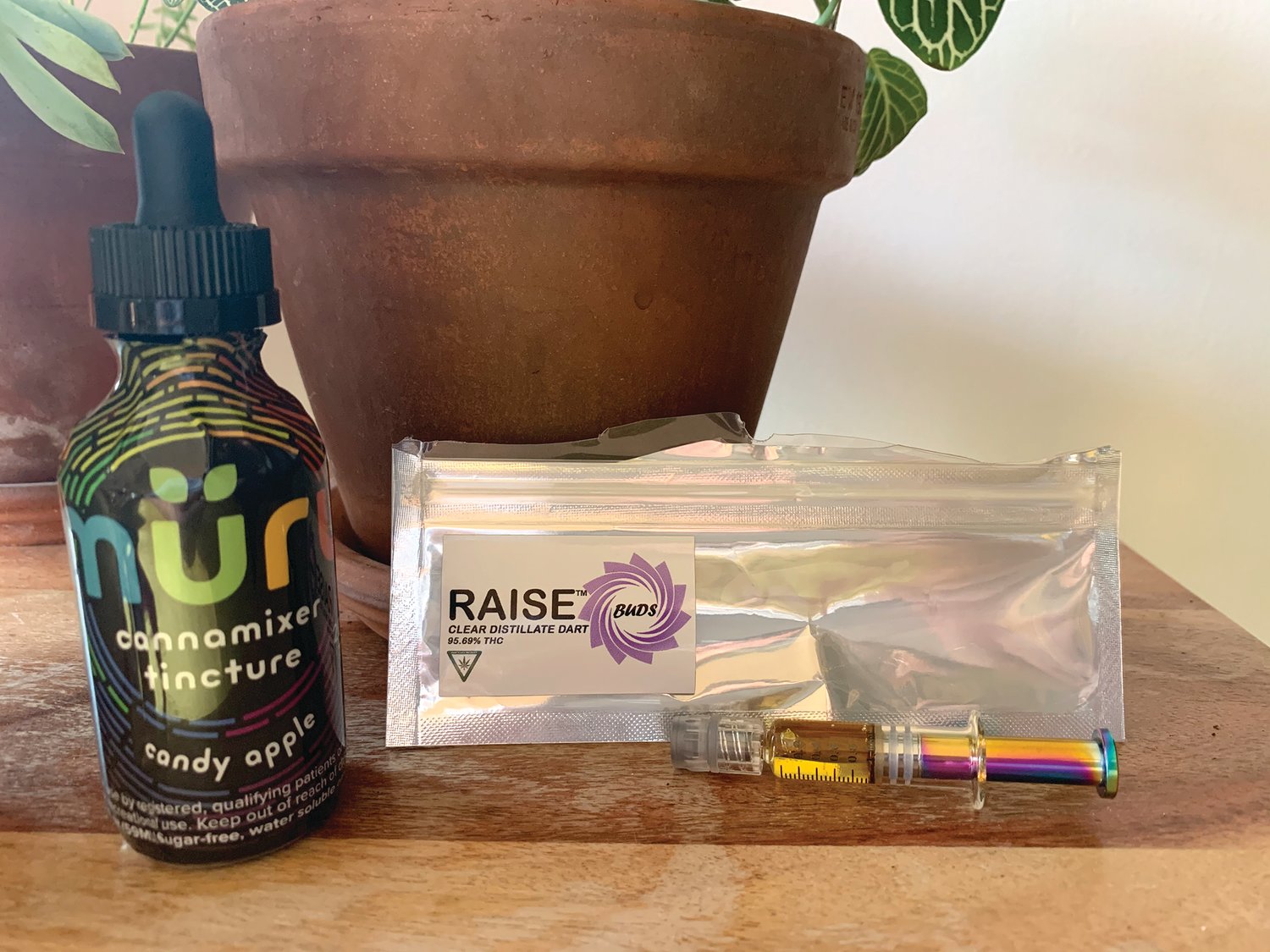 Bazonzoes — which opened last month across the street from Deluca’s Restaurant — is still among the newest medical and recreational pot shops on Lansing’s ever-blooming cannabis market. And as its inventory expands, the retailer is quickly becoming a Capital City mainstay.

It doesn’t get much more potent or pure than cannabis distillate. The process, though much more refined in recent years, has been around for centuries. And it’s all about breaking down, processing and separating raw plant materials until you’re left with an ultra-concentrated oil.

Distillate, unlike other waxes or other dab-able concentrates, is also incredibly versatile.

Because it has been stripped down into a solitary carbonylated cannabinoid, the sticky oil can be used for dabs, in vaporizers, rolled into a joint or packed into a bowl — or simply swallowed. I squeezed some on top of a cookie and mixed a dash of the sticky ooze into a cup of coffee.

Heads up: This glass dart doesn’t offer much leverage for the fingers. And because the distillate inside was about three times thicker than maple syrup, it was a serious pain to squeeze out. I’d recommend first heating it up with your hands or dunking the glass tip into a hot beverage.

Remember: At 96% THC, this dart has about 960 mg of THC. That’s like 10 brownies. Even seasoned smokers should consider taking it (way) easy on cannabis distillate, if only because of its unmatched potency. Anything stronger than 100mg is usually just gravy to me anyway.

About 20 minutes after I picked the last stubborn piece of distillate off my front tooth, the high was setting in. And though the mind-numbing effects were obvious as I slouched back into my chair, I also found them to be terribly boring. No creativity. No energy. Just total zombie mode.

If you’re turning to cannabis purely as a medicinal painkiller or to ease insomnia or another medical ailment, this might be the best thing on the market. It’s direct, potent and versatile. But if you’re into exploring new flavor profiles and terpene interactions, this might not be for you.

It was, however, a great pairing with four straight hours of video games and a full night’s rest.

Distillate might be chemically potent, but the complex extraction process isn’t without criticism. Along with impurities, the distillation in this blend also appears to have removed all of the terpenes — which would normally provide various tastes and smells, and contribute to the “entourage effect” that makes each individual cannabis strain a unique and complex experience.

For $45, however, it’s not possible to find much more bang for your buck in terms of THC alone. I’d pick it up again, but only to amplify the effects of some of my favorite sativa or hybrid blends.

Finally! A drink mixer that doesn’t seem to leave an oily layer on the top of my beverage! Muru is an Oregon-based company that offers a variety of drink blends, including “cannabucha” and something called “highwater” that I haven’t yet been able to get my hands on in Michigan.

This cannamixer is a sugary-flavored — and highly concentrated — drink mix that was actually water soluble. For that reason alone, I was happy to add it to the collection. Other varieties on the market have advertised themselves as drink mixers, only to leave oily bubbles in my cup.

I have yet to use enough to get baked from the drink mix alone, but I’ve definitely noticed some uplifting effects when pairing a lightly flavored drink with a joint or two. The syrupy flavor is similar to a Five Hour Energy shot and was a bit too overwhelming for more than a few drops.