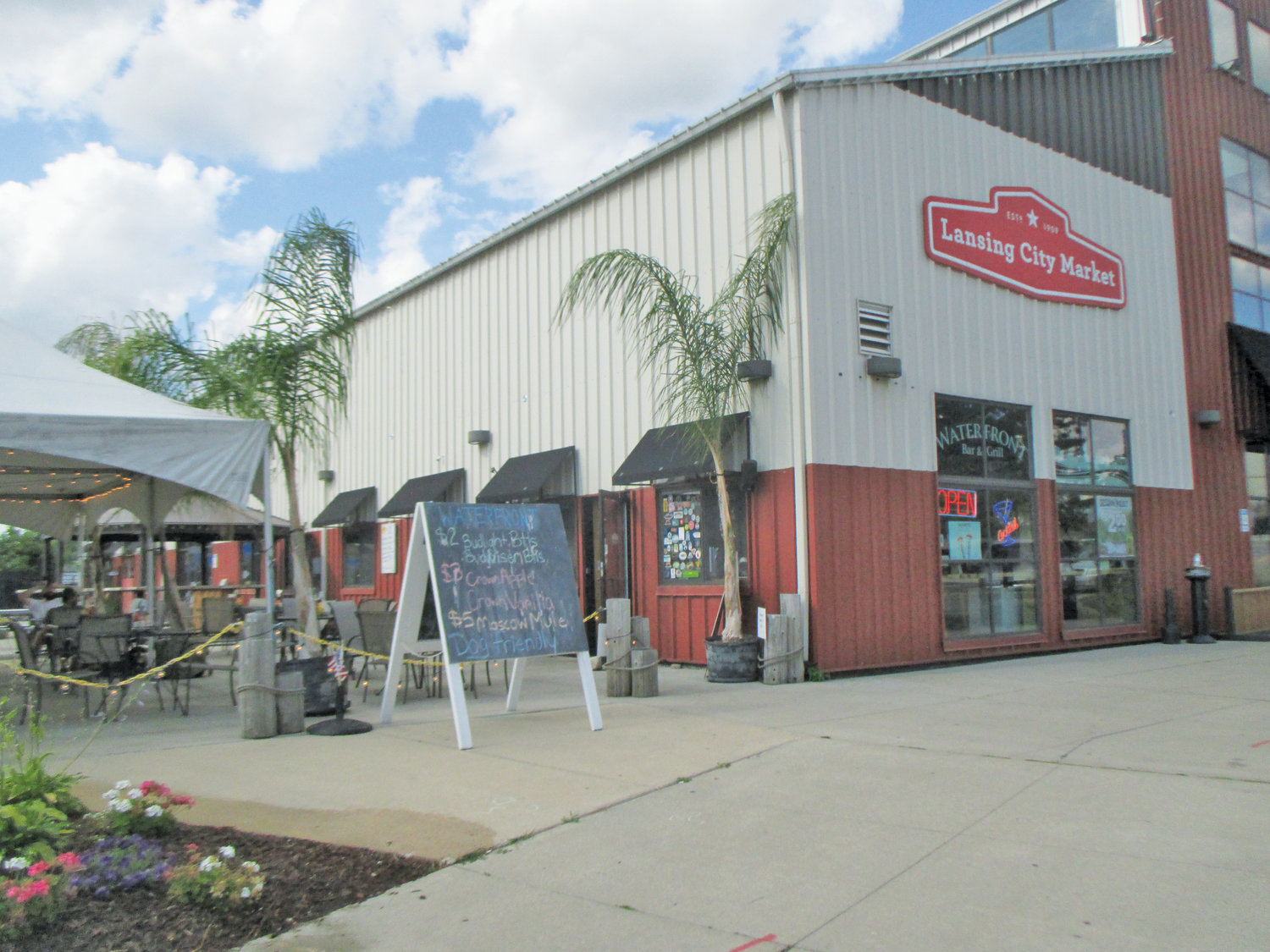 The Schor administration has negotiated an agreement with a developer to rent the City Market building for far less rent than the Waterfront Bar & Grill was paying for a portion of it.
Chris Gray/City Pulse
Posted Monday, September 14, 2020 3:45 pm
Kyle Kaminski

TUESDAY, Sept. 15 — A discounted rental offered to the developers of the old Lansing City Market building is expected to be offset with annual savings in maintenance and utility costs. And for the first time in years, the city actually stands to churn a profit off a vacant pole barn.

A lease agreement details the financials behind a plan between Lansing Mayor Andy Schor and the Detroit Rising Development group to transform the vacant riverfront building into a community hub called the Lansing Shuffleboard and Social Club. Under the deal, the city stands to collect more than $1.6 million over the term of a 40-year lease agreement.

Over the summer, the vacant City Market was made available as rental space for about $200 an hour. The last tenant — Waterfront Bar & Grill — paid $72,000 annually before it was evicted last year. Schor’s current plan, while offering room for rate hikes, starts out at three times less.

A spokeswoman for Schor's office said the reduced rental rate was justified because the city will save about $80,000 annually in maintenance and utility costs that it has paid for several years.

Detroit Rising won’t require any of those usual subsidies from the city, officials explained. So, instead of losing out on $8,000 annually during the Waterfront’s time at the City Market, Schor expects to bring in at least $24,000 annually through the lease, if approved by the City Council.

Those discounts were necessary to push the project into motion, officials explained. And developers may also be looking for some tax incentives to get construction finished by 2022.

The lease also outlined plans for portions of the project to be funded with tax-increment financing through a city-approved Brownfield Redevelopment plan that would reimburse developers with future tax revenues on the basis that they also build “public infrastructure.” A proposal for tax-increment financing has not yet been submitted to the Lansing City Council.

If Schor and developers have their way, Detroit Rising will invest about $3.2 million into its social club and eight shuffleboard courts. Plans also include six or more food vendors, a bar, live entertainment and other community-oriented space to be developed in conjunction with the city.

Officials said the initial lease will likely last only 10 years. An option for renewals, however, could extend the lease through 2060. Parts of the project could be open to the public within a year, but full completion could take up to two years, said Jon Hartzell, Detroit Rising’s founder.

The lease agreement released last week charges Detroit Rising $500 per month for each month that any business is open to the public during construction. Over the first year, that monthly rate would escalate to $2,000 and increase annually by at least 2.5% through the end of the lease.

Assuming the lease is fully executed, the annual rate would be about $30,000 by 2030 and about $64,000 by 2060 — still less than Waterfront Bar & Grill’s monthly rate in 2018, but without the added burden of covering maintenance and utility costs at the empty building.

A clause in the contract could kick the rate higher based on the consumer price index in the event that it climbs by more than 2.5% during any given year. Another clause allows city officials to recalculate and increase the rental rate in 2029 based on a percentage of Detroit Rising's revenues. Neither necessarily mandate a larger rate hike, but leave open the opportunity.

The lease also prohibits marijuana and requires space be reserved for “community programming” — like weekly cooking or cocktail classes — for Greater Lansing residents.

Schor last week said the proposed project fulfills all of his requirements for the space. “It took a little longer than we hoped to find the right match, but I wanted a project that would activate the space, that is sustainable and would not need a yearly subsidy from the city,” he explained.

The announcement put an end to months of rumors that the city would give up on finding a creative “destination” use for the City Market space and end up leasing it to a brewpub or another redundant tenant. Instead, developers are using a tried-and-tested model.

The City Market building is largely “shuffle ready,” officials said, but changes will still need to be made to the shell and patio. The wall facing the river will also open up, with garage-style doors and more windows, to take advantage of sunset river views. A mezzanine will be added.

The “new” City Market opened in 2008, in hopes of saving the nearly century-old market from its decline. The idea was to put up condos where the old market stood, wrapping the new market in a built-in customer base that was expected to grow as citywide development boomed.

But the timing was not propitious. The surrounding condos took years to complete, in part because of the Great Recession, while market vendors withered on the vine. The expected boom in pedestrian River Trail traffic and kayak rentals was also still more than a decade away.

Meanwhile, the new market was plagued by myriad problems, from the building’s invisibility to traffic along Cedar Street to weak promotion, inconsistent management and nuts-and-bolts problems with parking, loading, trash and recycling — including a legal spat with Waterfront.

The outlook, however, is different in 2020, despite a new recession brought on by the coronavirus pandemic. Rotary Park, a twinkling urban hangout with riverside benches, tables and a sandbox “beach,” has drawn hundreds to the river's edge, directly in front of the building.

Add a stunning boom in kayaking activity, with a livery and launching site a few yards upstream from the City Market, and the timing for the new project looks perfect to developers and Schor.

The draft lease agreement calls for construction to be finished by the end of 2021 unless otherwise agreed by both the city and the developers. It also requires the city to provide 25 dedicated parking spaces for the development. Developers will also have the option of purchasing up to 2,000 individual two-hour parking passes from the city for $2 per card.