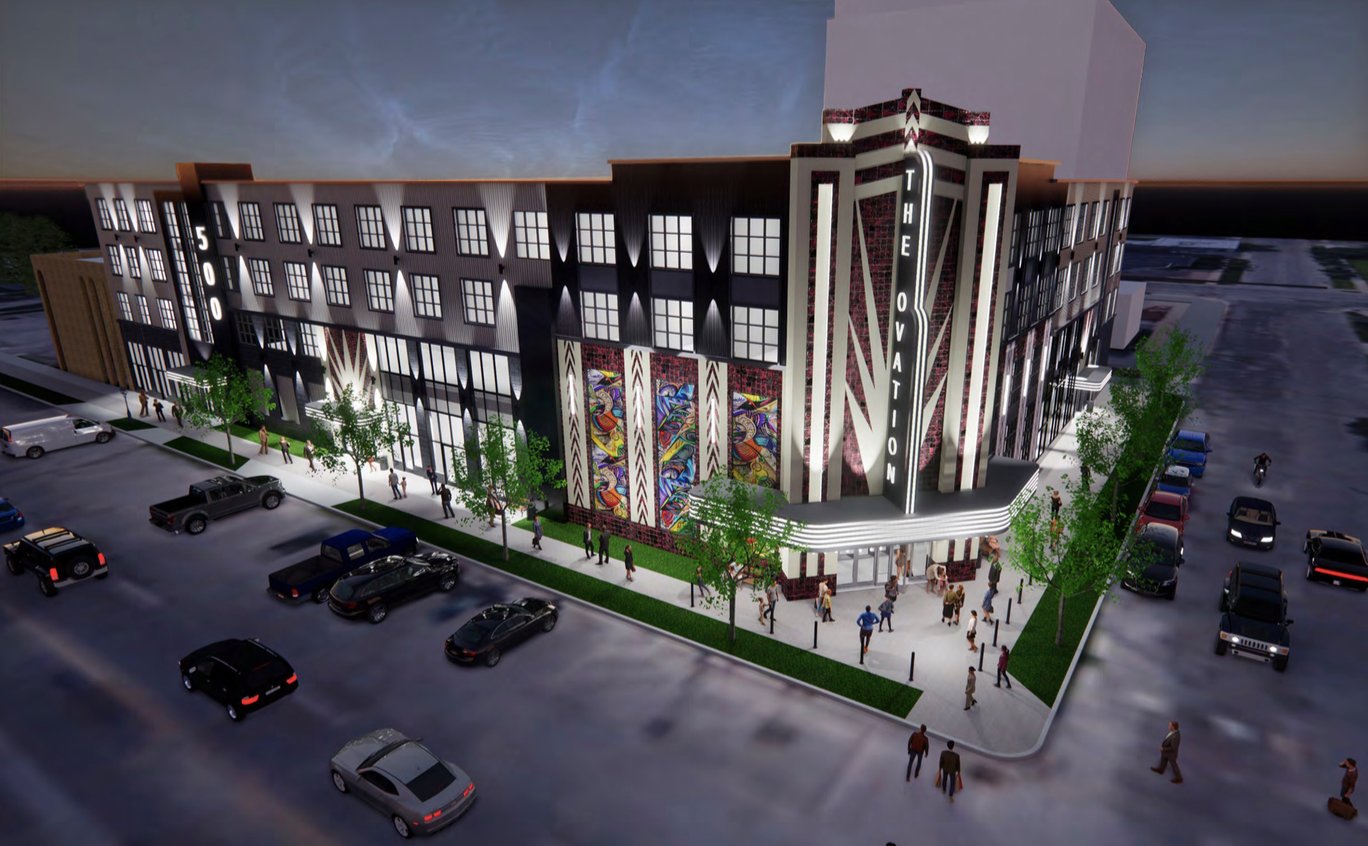 TUESDAY, Feb. 1 — A performing arts center two decades in the making appears to be finally coming to fruition in downtown Lansing.

Lansing Mayor Andy Schor announced plans today to build a mid-sized concert venue and arts hub this year on a vacant lot at the southwest corner of South Washington Avenue and West Lenawee Street in downtown Lansing. A Dymaxion Development of Lansing, led by Jeff Deehan and Brent Forsberg, was named the developer.

In a news conference that was scheduled to start at 3 p.m. today, Schor unveiled details of a facility, called The Ovation, that is designed to fill the empty market niche between smaller venues and the 2,000-seat Wharton Center. A major goal is to draw national rock, country, hip-hop, comedy and other attractions that typically skip Lansing to play in Detroit or Grand Rapids.

Fueled by a proposed public-private partnership that involves at least $10 million in dedicated arts funding from the city and state, the site could also host arts organizations, events and educational programs.

It will also serve as a year-round hive of cultural activity as the permanent home of the Lansing Public Media Center, Schor said.

And if additional funding comes in, it could have as many as 40 units above the performance space where artists can live and work at rents meant to attract tenants who are priced out of space elsewhere in the city's core. The income is meant to offset operating costs for the performing arts center.

“For decades, Lansing has needed a concert and performing arts venue,” Schor remarked. “This is an incredibly exciting opportunity to bring concerts, community events, educational opportunities, speeches, comedy and so many other live performances together in a new, state-of-the-art venue. Bringing thousands of people to downtown Lansing for concerts and other events throughout the year will have such an incredible impact on our small businesses.”

Early plans call for constructing a venue that can house  1,530 seats — or 2,025 standing concertgoers — which could also possibly house local arts and culture organizations like the All of the Above Hip-Hop Academy and the Lansing Art Gallery. Officials also envision a year-round calendar of concerts, classes, recitals, exhibits, independent film screenings and other events. It might become the home of the Capital City Film Festival as well.

Financing hasn’t been finalized, but the construction project is estimated to cost up to $21 million. At least $10 million has already been carved out by state and local officials to support arts and culture in Greater Lansing — including $2 million in the latest state budget, with the possibility of additional grants, private investments and tax incentives still yet to come.

City officials said a loan on the housing and workspace lofts may also be sought, if needed. The city has also hired Capitol Fundraising Associates to plan and finalize fundraising for the balance. Several organizations and community groups are already interested in sponsorships.

Early plans also include a private party room with a balcony overlooking the main stage; a second, smaller performance area near the lobby; multi-purpose community rooms for local nonprofit organizations and school groups; and retail space along South Washington Avenue.

It could also mark the final chapter in a 20-year saga to bring a performing arts center to Lansing — one that has only started and stalled under four different mayoral administrations.

In September, it was announced that the Lansing area would receive $2 million as part of this year’s state budget for the construction of a new performance hall. An additional $8 million in revenue is expected from the bonding of public, educational and government access — or PEG — fees, giving the city of Lansing at least $10 million to get the public-private project underway.

Those fees are part of the franchise fees that cable companies pay the city in exchange for running their cables in the public right-of-ways. By law, 2% of gross revenues from those companies in the city of Lansing must be used for capital investments, much like this project.

Dominic Cochran, director of the Lansing Public Media Center and a key player in the development of the proposed facility, said the “goal is not to have an operating subsidy at all.”

“The plan is to build a culture from the very beginning that makes this really inclusive for the community — so everyone can have a sense of ownership,” Cochran said at today’s press conference. “I think because we're working with these organizations like the Lansing Art Gallery and All of the Above Hip-Hop Academy, we expect this to be a very community-driven facility.”

Lansing-based Wieland Construction, the contractor for the proposed facility, has already staged its equipment across Capitol Avenue, where construction of a new apartment block is underway.

Capitol Fundraising Associates released a study in May 2020 finding that a proposal for a larger, $60 million facility was not feasible in Lansing, owing to a lack of big donors in the region and “donor fatigue” among the rest. At a stakeholder meeting last week, Bob Trezise, president and CEO of the Lansing Area Economic Partnership, or LEAP,  also urged the city to make the performing arts center a public-private partnership to take advantage of brownfield tax credits. Schor said he was open to a brownfield plan. State officials said the arts center may also be eligible for a $5 million grant through the Revitalization and Placemaking Program, a federal COVID-19 relief program.

"Cities are not just about jobs. Cities are also about places for art and entertainment. It’s not just a place to go to work, but it’s also a place to inspire yourself — to improve your soul,” Hertel said. “Today’s plans show a commitment of Lansing as a hub for the arts, music and culture.”

Negotiations between city officials, developers and prospective tenants will continue this month.

The next steps, according to a recent stakeholders presentation, are to “gather consensus” among stakeholders on how to move forward and set up fundraising targets by the spring. And depending on how the plans shake out, construction could begin this year, officials estimated.

LAWRENCE COSENTINO contributed to this report. Read more in this week’s print edition.