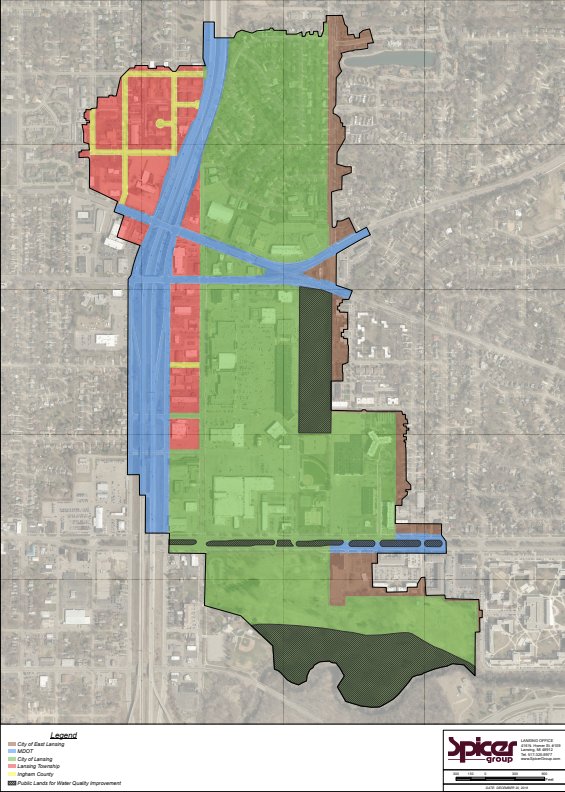 A map of the area with 180 residences and commercial properties that will pay the lion's share of the assessment for the proposed Montgomery Drain project.
Ingham Co. Drain Commissioner
Posted Monday, May 18, 2020 2:47 pm
Council to consider plan

City officials will discuss the upcoming drainage assessments in more detail at tonight’s 5 p.m. virtual Committee of the Whole meeting and again tonight’s 7 p.m. virtual City Council meeting. Check back with City Pulse for additional coverage on the drainage project and the city budget.

MONDAY, May 18 — Lansing residents could be on the hook for almost two-thirds of the cost of Ingham County Drain Commissioner Pat Lindemann’s $34.8 million Montgomery Drain reconstruction plan.

The city’s portion would be more than $41 million, according to city calculations, when paid back with interest over 30 years. The average taxpaying property owner would pay an added .26 mills on their property taxes — an annual increase of about $13 for a home with a taxable value of $50,000.

However, owners of the 180 residential and commercial properties in the immediate area of the project would pay much more: $377 annually for residences and $11,831 for commercial, in addition to the city tax.

Despite the pandemic-generated economic crisis, Lindemann is pressing forward with his decades-long plans to reconstruct the drain, which runs from Frandor to the Red Cedar River, in order to cut water pollution.

The city of Lansing could cover about $22.3 million, or 64% of the costs as Lindemann decided, over the next 30 years. That would mean the city’s tab is nearly $1.37 million a year, including 4.5% a year annual interest — coming at a time when the city is slashing its budget and facing likely layoffs.

Under the drain code, city officials have said they’re entirely powerless to stop the county drain commissioner from moving forward with the expensive project this year, even during a state of emergency. Under law, Lindemann decides the costs and how they’ll be divided among local municipalities. Lansing just eats the bill. The mayor and the City Council only decide how to pay.

And while Lindemann is still exploring plans to piecemeal the upfront costs over several years, city officials are preparing plans on how to cover the project entirely with new taxes.

And with $7 million already slashed out of the budget, and reserve funds at their lowest point in history, the mayor can’t reach much deeper into the city’s pockets to cover the costs, he said. His only viable alternative: Bill local property owners directly for the costs for the next 30 years.

The mayor’s plan, which is wrapped into his budget proposal up for City Council passage tonight, calls for half of the city’s estimated costs — about $1.37 million per year for 30 years — to be split up between every city property owner and the owners of the parcels adjacent to the drain project.

If approved, half of the city’s costs — or about $685,000 annually — would begin being wrapped into citywide property taxes as early as this winter, officials said. The other half would be covered by a specific assessment for about 125 residential and 55 commercial properties.

“It’s either going to be spread out among all the citizens of Lansing and everyone has to pay for it, or we’re going to assess that specific area,” Schor said. “We’re splitting it. Nobody wants to pay more. That would also be quite a bit of money if we just billed it to taxpayers in that area.”

Schor, like how officials in East Lansing are covering their share of the project, had previously considered covering the costs out of the city’s general fund. That’s no longer possible, he said.

Ten of 13 bids for Lindemann’s 2-year-old cost estimates haven’t been received. The costs, he has repeatedly emphasized, are subject to change by the end of July. But Schor and the City Council have to figure out how to finance the project as part of the annual budget, which is up for a vote tonight.

According to city projections, half of the costs would be covered by assessments to 180 property owners along U.S. 127 near the Frandor Shopping Center and the massive Red Cedar redevelopment project, an annual cost of about $377 for residential properties and $11,831 for commercial.

The largest single contributor would be the Red Cedar development, which is slated to pitch in at least $2.75 million in assessment costs.

The rest of the costs would be covered through additional funding from every taxpaying property owner in the city. Officials weren’t able to provide more specific rate increase estimates this week. The City Council doesn’t need to set the tax rolls until later this summer as the costs are determined.

Schor said his administration has encouraged Lindemann to pause his plans, especially considering the city would need to assess its residents during a public health crisis to pay for the early stages of the construction. Lindemann, however, has nearly total autonomy on the project.

“There are several options we can look at. We can hold up a little bit, but we also have some construction that needs to take place this summer. We’re looking at ways to minimize the impact,” Lindemann said. “If we break this into steps, then we’re talking about a much smaller bill. I’m not opposed to doing this one way or the other. We’re having the conversations.”

Lindemann also emphasized that interest rates on bonds that would cover the costs of the project are particularly low, which could reduce costs if he strikes quickly to borrow. Some construction, he noted, is also already ongoing and must be completed before the winter.

“We’re going to do the project. That part is not going away, but I’m not at all opposed to borrowing this in pieces to lower those costs for the time being,” Lindemann added. “I have full sympathy for these municipalities, we just have to step forward and figure out our next move.”

While Lansing is expected to cover 64% of the project, the rest will be split up among Lansing Township with 14%, the Michigan Department of Transportation with 10%, the City of East Lansing with 7% and the Ingham County Road Department with 5%. Other municipalities, like the city of East Lansing, plan to spread the new costs across every property owner in the city.

The Montgomery Drain Project has been in the works since Lindemann first noticed the crumbling drainage infrastructure back in the 90s. The stormwater retrofit, which Lansing petitioned to have done in 2014, is designed to reduce up to 75,000 lbs. of pollution from the Red Cedar River annually by constructing a series of natural features within the drain system.

Nearly three miles of service-access paths will also serve as hiking and biking paths for the public.

Schor and Lansing City Council members recognize the need for the project, but questioned whether now is the best time to hit Lansing’s already struggling residents with an assessment. Without wiggle room in the general fund, there aren’t many options at their disposal, they said.

“We’ve got homeowners that are looking at an increased assessment, and maybe this is the one that is too far over the edge,” said Council President Peter Spadafore. “Some compassion and some consideration needs to be given to what these residents can afford to pay right now.”

City Councilwoman Patricia Spitzley said she would prefer to delay the project — and its assessments — until residents begin to financially recover from the ongoing pandemic. But it’s clear the burden to taxpayers can’t be offset by the general fund, she said. The cash isn’t there.

Added Councilman Brandon Betz: “I personally believe these sorts of taxes should fall primarily on the piece of the community that is benefitting from the tax. The question is how we do this while also causing the least harm to the people who are the most vulnerable during this crisis."