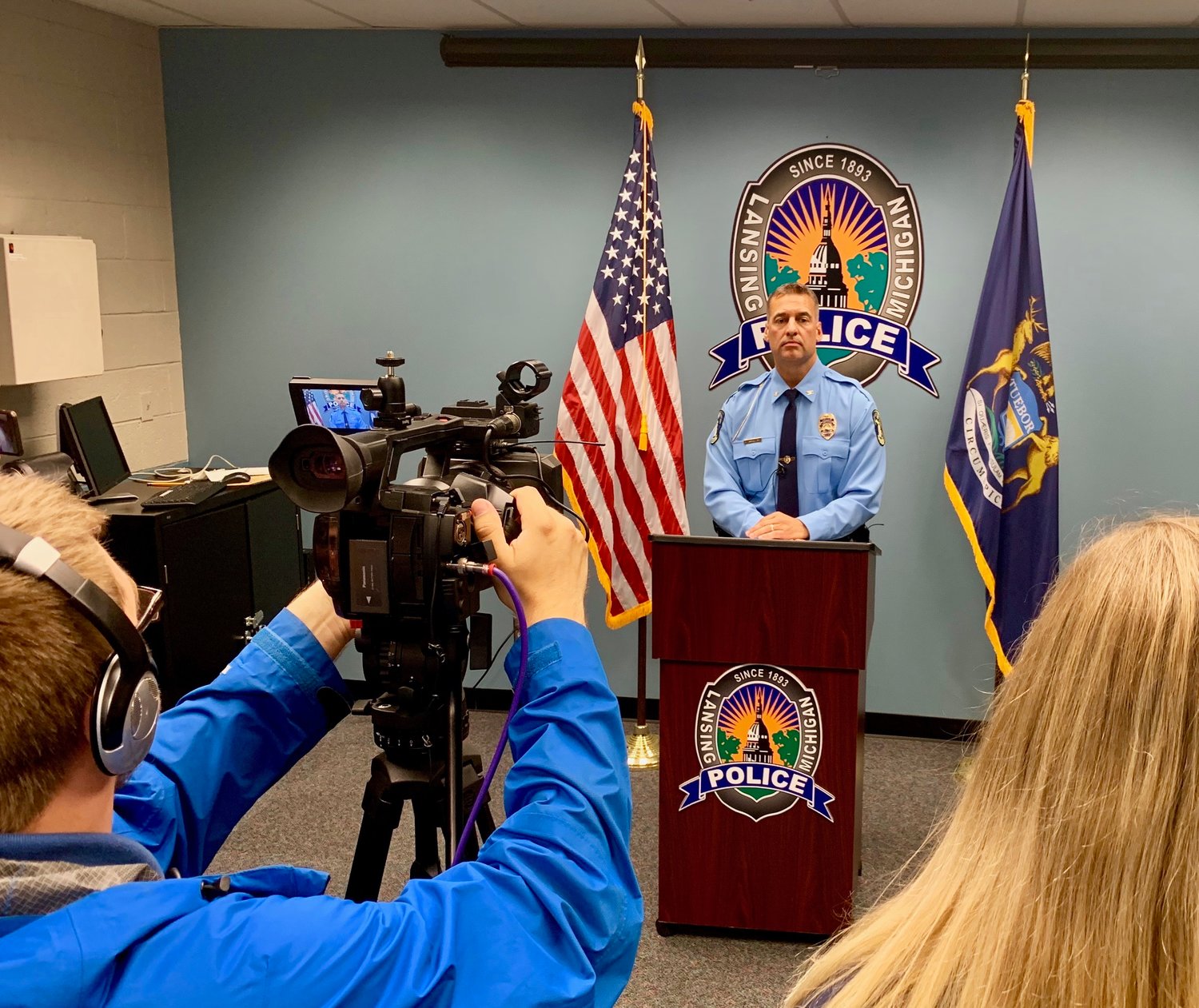 Lansing Police Chief Michael Yankowski will oversee an internal investigation into the use of force by an officer after eyewitness videos showed an officer apparently repeatedly striking a teenage runaway.
City Pulse/Kyle Kaminski 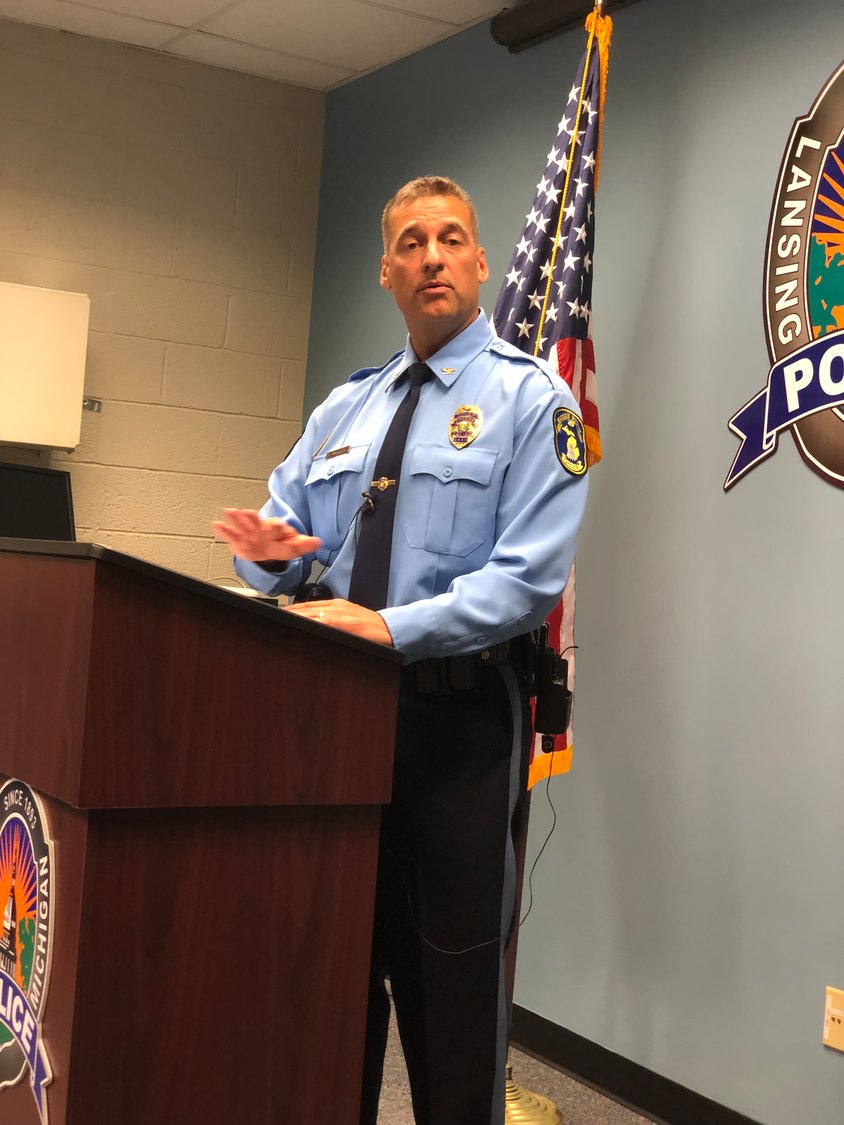 FRIDAY, June 14 — Lansing Police Chief Michael Yankowski will oversee an internal investigation into the use of force by an officer after eyewitness videos showed an officer apparently repeatedly striking a teenage runaway.

An unnamed Lansing Police Department officer Friday morning appeared to strike a 16-year-old girl at least 16 times in the thigh amid attempts to take her and a 15-year-old boy back to the Ingham County Youth Center. That followed a brief chase and some resistance. Both were captured in a “successful arrest,” Yankowski said.

Several amateur videos posted on Facebook show a female police officer pushing the girl into the backseat of a police SUV as the girl appeared to resist. The girl’s right leg appeared to prevent the officer from losing the door. The officer then appeared to hit the girl twice below the waist, pause, then apparently strike her 14 more times.

An onlooker is heard on the video: “Did she just hit her? … Dude, she’s beating the shit out of her.”

The videos showed that the officer is white and the girl black.

The officer is in her first year as a police officer, Yankowski said. The incident will undergo an internal investigation regarding the “training tactics” she used to repeatedly punch the girl before she was apprehended, he said. Complaints later flowed into the Police Department. Yankowski called a press conference in response.

“Allegations or complaints against Department employees are taken seriously and thoroughly investigated,” Yankowski said in a subsequent press release. “The Lansing Police Department holds its employees to the highest standards of professionalism and integrity.”

Yankowski said his account was based on what police and witnesses had told officers earlier this afternoon. He said body camera footage will also be reviewed within a typical, 90-day window to complete the investigation.

Department policies, under state law, only allow “objectively reasonable” force — a standard which considers both the level of resistance and the age of the suspect. As with all forceful encounters, the incident will be reviewed. Allegations of excessive force that have since surfaced are being taken seriously, Yankowski added.

The officer in question, in the meantime, is off the streets on paid injury leave after suffering “cuts and scrapes” and a sprained hand, the chief said. He said other officers may have received minor injuries as well, but the 16-year-old girl was not injured during the encounter. The officer’s name has not been released pending the internal probe; Names of juvenile suspects are always withheld.

Officers spotted the teenage duo on the 1100-block of Dakin Street, north of the Potter Park Zoo, at about 11 a.m. before they took off running, Yankowski said. Two officers later caught up with them; One of them threw the blows. Yankowski said they were only used “as a distraction” to close the rear door of the officer’s Police SUV.

The teenagers were wanted for probation violations and warrants as runaways for escaping from custody, Yankowski said. The girl had also attempted to escape but was forced to the ground “in order to control her,” he said. She was then carried to a nearby patrol vehicle before the officer started swinging her fist at her thighs.

As with any other use of force used by police, a full-blown investigation will provide a final determination on the matter and the complaints that surround it, Yankowski said. Meanwhile, outrage is building on social media sites such as Facebook, attracting some vocal skeptics like Ingham County Commission Thomas Morgan.

“A kid failing to comply doesn’t give you a license to punch the hell out of them,” Morgan posted online.

Bishop David Maxwell, Lansing Mayor Andy Schor’s director of the Office of Community and Faith-based initiatives, attended the 4:15 p.m. press conference. He offered a different take as he paced the room before the meeting began. “It looks way worse than it really is,” Maxwell said during an overheard phone call.

Yankowski also labeled the maneuver as strikes “in order to gain control.” If allegations of police misconduct are ultimately found to be true, penalties may range from counseling to termination, according to a press release. Those with videos or information are asked to call 517-483-4804 while the investigation continues.

The Lansing chapter of Black Lives Matter, in the meantime, has since demanded that the Lansing Police Department officers involved in the incident be removed from active duty and criminally charged with assault.

Visit lansingcitypulse.com for continued coverage as the investigation proceeds.