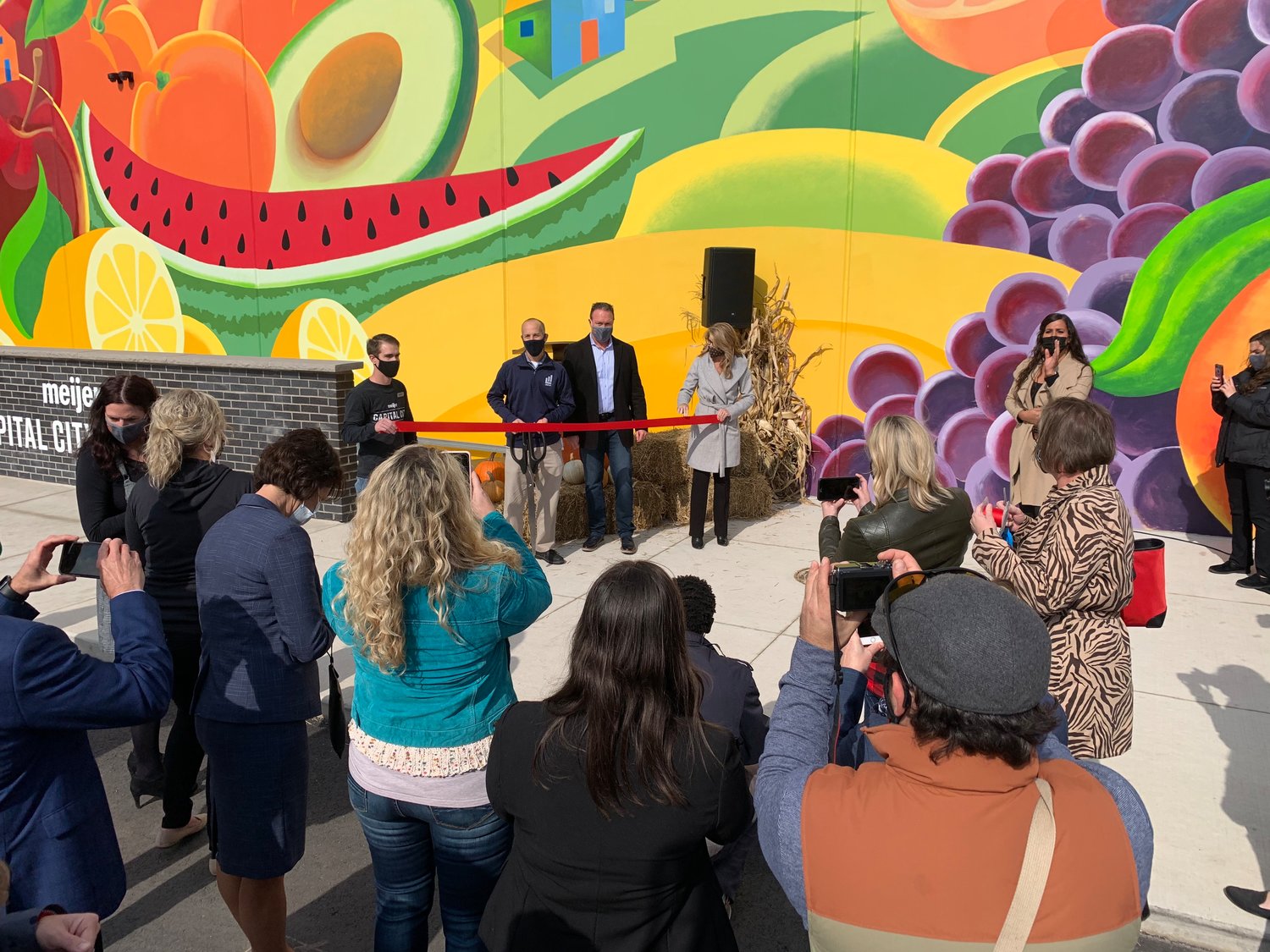 Schor said he and his family — like many others who live anywhere near downtown Lansing — have visited Meijer’s new “urban” formatted Capital City Market at the corner of Michigan Avenue and Larch Street at least four times since it first opened its doors earlier this month.

The 37,000 square foot Meijer store opened to the public last Wednesday and features an open café area with vendors like Ferris Coffee Co. and Capital City Deli, as well as a full sushi bar. The six garage-style doors in the front will be open when the weather is comfortable and warm.

There’s also an extensive selection of beer, wine and spirits, and customers can pick their favorite bottles from a 14-foot high liquor wall. The adjoining beer cave, which has a wide array of local choices, is decorated with the neon signage of Lansing and other Michigan-based breweries, such as Ellison Brewery + Spirits, Lansing Brewing Co. and Bell’s Brewery.

The back entrance has a 100-spot parking lot with a wall covered with a massive, colorful mural painted by local artist Brian Whitfield. Gillespie said that Michael McKissic, founder of Mikey 23, also helped to repurpose old materials from buildings that were demolished to build the store.

The 4,500 square foot produce department, which features and promotes Michigan-produced goods, is restocked with fresh food seven days a week and boasts 3,500 products that are unique to Michigan. The store also has six full aisles of food goods, and several aisles of home, health and beauty supplies. Prices at the new store are similar to that of other Meijer locations.

Store Manager Mitch Cook said about 20% of the products are locally sourced, but he hopes to see that climb to 30-40% over the coming months as employees continue to expand selections.

On his most recent visit to the market, Schor said a customer mistook him for an employee.

“No, but what do you need to know? I got every aisle memorized,” Schor said in response.

Attached to the store are 40 apartments overlooking the Stadium District — many of which are already leased — and the first hotel to come to downtown Lansing in two decades. Gillespie said the Marriott Courtyard portion is expected to open at least by the end of March next year.

Schor said just two or three days after he was elected to office in 2018, Gillespie personally approached him and Deputy Mayor Samantha Harkins to pitch the concept for the development. Ever since it’s just been a waiting game for contractors to get the building finished, Schor said.

“This is like what you picture, but you don’t think it’s ever going to happen,” Schor remarked.

The store is open 7 a.m. to 10 p.m. daily. Free samples have been frequently available. Designated hours for frontline workers and the immunocompromised run from 7 a.m. to 8 a.m., Monday through Thursday. All customers are also required to wear face masks upon entry.