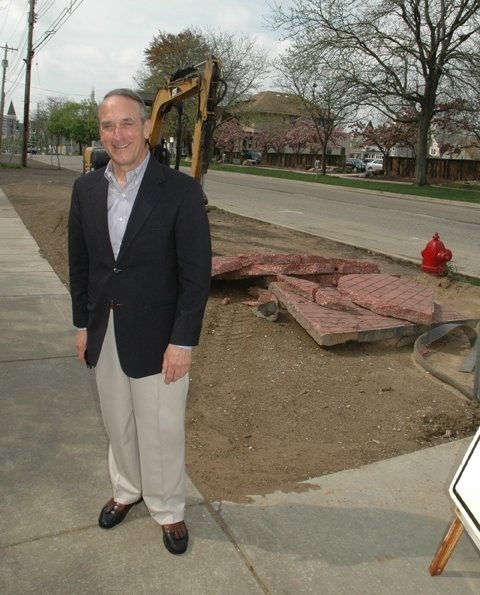 
That’s how Lansing Community College President Brent Knight sums up the projects popping up around his campus. LCC just completed a $31 million overhaul of the Arts and Sciences Building that introduced futuristic upgrades in labs, classrooms and more. Right behind it is the $18 million renovation of the Gannon Building, which will include the installation of a food court, an artistic new exterior and more. Twenty new sculptures will be installed on the campus by summer’s end, among other projects.

The projects are courtesy of the Build Forward program, a $67 million initiative approved by the LCC Board in 2012, which aims to improve the student experience and enrollment by drastically revamping college facilities and grounds.

Knight, who resides in the college-owned historical Herrmann House on Capitol Avenue (renovated in 2012 for $900,000 under the initiative), also soon expects to wake up to an entirely different view in the morning. By Labor Day, LCC aims to overhaul the stretch of Capitol between Genesee and Saginaw streets just beyond his front door.

Utility lines will be moved this summer into an alley immediately to the west, making room for a lush row of trees and 1920s-style streetlights that match most of downtown Lansing. A masonry sign similar to the one welcoming students on the corner of Shiawassee Street and Grand Avenue will be installed amid soon-to-be-planted greenery.

The main goal of the Capitol Avenue projects, Knight said, is to restore the historical nature of the area — old-timey streetlights, no pesky power or phone lines and lush, beautiful trees.

“We want to be good stewards and neighbors, and we wish to return this area to its rightful state,” he said. “It’s a very historically rich part of Lansing.”

Knight’s desire for historical authenticity might seem a bit odd against the backdrop of the rest of the college’s upgrades. This is, after all, the same man whose vision for the Arts and Sciences Building led to space-age lime green furniture in commons areas, video monitors that rapidly cycle through inspirational quotes and paintings adorned with QR smartphone codes.

But the college’s professed commitment to preservation might seem even odder. LCC recently tore down three older homes that stood at the corner of Capitol and Sagi naw to make space for the park and sign.

Lansing City Councilwoman Jessica Yorko fought against the demolition of the homes since the college purchased them in 2012. She said that while she appreciates LCC’s recent improvements, the college hasn’t paid attention to the voices of preservationists.

Yorko also said she fully welcomes improvements to what is now a vacant lot but that the college shouldn’t be touting the improvements under a theme of historical preservation.

“You can’t go back in time, but the demolition of those homes is not consistent with the goals of preservation,” she said.

Gretchen Cochran, president of Preservation Lansing, echoed Yorko’s statement that LCC made an insufficient effort to include local preservationists in their decision. This led to salvageable and historically valuable materials going to waste, she said, adding that labeling the current projects historical in any way was “almost laughable.”

Cochran did, however, say that while their efforts can be “misguided,” she appreciates the college’s beautification.

“[Knight] gets criticized a lot for taking school money and beautifying the campus, but I live three blocks from LCC and I love what they’ve done,” she said. “Aside from tearing down those houses.”

Bob Trezise, president and CEO of the Lansing Economic Area Partnership, said he has served in a “moral support” role for Knight as he embarks on the college’s overhaul. Trezise said that those who doubt Knight and his college’s commitment to historical preservation need to look at the greater vision.

“Dr. Knight and LCC and myself are all historic preservationists,” he said. “But you don’t have to be an absolute purist about it. There needs to be a compromise there.”

Trezise maintains that the summer projects are a necessary evolution for LCC on its journey to attracting more students. He also said that the decision to tear down the homes didn’t come easily.

“LCC tried everything genuinely possible to avoid tearing down those homes,” he said. “But it’s a tradeoff. It’s critical to have a setting that makes students feel good about their school.”

Both Trezise and Knight say LCC needs to increase its branding on that side of campus.

“It’s going to be a quiet monument that is tasteful and blends in,” Knight said. “A college needs to be inviting for students. The area will be very park-like.”

Knight said of the controversy that there simply wasn’t enough money to restore the homes.

“The community is outraged if you tear (houses) down, but unfortunately nobody wants to pay for it,” he said, adding that maintenance costs for the homes are seen as a very low funding priority.

LCC has no plans to demolish or move the homes to make room for new buildings, Knight added.

The Herrmann House is a good example of the unexpected cost of restoration. The work was supposed to run around $300,000. But it ended up at $900,000.

“Herrmann House would have caved in,” he said. “It was rotted out.”

As for how much of the $67 million the Capitol Avenue projects will use, Knight estimated $125,000 for utility relocation, $70,000 for purchasing and installing streetlights, $15,000 for tree planting and $40,000 for concrete and bricks. He added that costs are being “constantly refined.”

“I’ve had a vision for Lansing Community College I’ve been working on since I’ve been here,” said Knight, 67, who arrived six years ago. “This encompasses everything. We’re good stewards of the property, and we wish to be a good neighbor. We have been and will be.”