Meet Me at the Fountain’ concerts highlight downtown gem 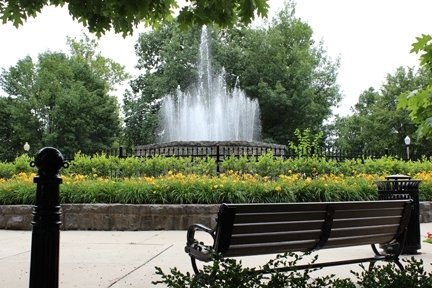 Posted Wednesday, July 3, 2013 12:00 am
Lawrence Cosentino
Early last spring, a woman borrowed some books from downtown Lansing’s Capital Area District Library branch and crossed Capitol Avenue for a stroll through shady Reutter Park. It was the perfect coda to any library visit. She almost tripped over Ingham County Treasurer Eric Schertzing, who was bent over a flowerbed, all by himself in the dirt.

Had Schertzing taken to drinking in the park on his lunch hour? No — he was planting flowers.

A tireless civic improver, Schertzing had a purpose, as he always does. He told the woman that the shady geometry of Reutter Park and its kaleidoscopic, multi-colored fountain are among downtown Lansing’s most undervalued gems. She agreed with him.

Because the woman was Downtown Neighborhood Association mainstay Gretchen Cochran — and because Schertzing is Schertzing — things started happening again in Reutter Park.

A new summer concert series, “Meet Me At The Fountain,” with food, a farmers market and other tie-ins, heralds a fresh wave of appreciation for Lansing’s oldest park and its rainbow of dancing water. It starts Wednesday. (See complete schedule p. 13.)

Long intervals of obscure tranquility, ruffled by sudden civic group hugs, seem to be Reutter Park’s lot in life. Today’s whippersnapper Friends of Reutter Park, with their Facebook page and semi-annual cleanups, have nothing on their energetic predecessors. The park got its first round of love in 1878, when it was established as Third Ward Park. It was soon re-named Central Park and became Reutter Park in 1944. Back then, the park was “a veritable three-acre swamp with a hummock of dry grass in the center,” according to a contemporary account.

Not for long. Instigated by tree-loving Lansing treasurer Seymour “Seym” Foster, a small army of citizens lined the park’s spoke-like walkways with seedlings, a few of which still loom over the park today.

The park had its splashiest day in 1929, when ber-citizen J. Gottlieb Reutter, mayor of Lansing from 1912 to 1918, bankrolled a $30,000 fountain that combines the action of a hot geyser with a Pink Floyd laser show.

Like the Taj Mahal, the fountain is a token of love. Reutter built it in memory of his wife of 36 years, Mary, who died of cancer in 1928. He got the idea from a similar but inferior fountain (“a very crude affair,” he called it in his memoir) he saw on a visit to Kalamazoo.

At Reutter’s behest, City Engineer Otto Eckert (of Eckert Plant fame) came up with an array of 11 water jets that shoot 30 feet high spumes of spray in constantly shifting patterns, augmented by 30 multi-colored lights that generate so many combinations it takes years to get through them all. A roll of 20 rotating cams and switches, similar to the works of a music box, turned the valves and lights on and off in sequence. The stones for the fountain were leftovers from the J.W. Potter House on Lansing’s west side.

Reutter was one of the city’s more interesting “characters,” to use his own preferred term. He came to Lansing by himself, a bruised and half-starved baker’s apprentice, at age 16 from Stuttgart, Germany. He found a kind lady on Grand River Avenue, between Cedar and Larch streets, who spoke German, fed him dandelion greens and helped him find his relatives in north Lansing. He ended up running a meat market and founding 15 area businesses, including Lansing Fuel & Ice, still owned by the Reutter family.

As a Democratic mayor, Reutter often faced off against a strongly Republican City Council. For a while, he ran a piggery with over 1,000 hogs on Willow Street. A local paper ran a cartoon of him, breaking his children’s piggy bank to pay back taxes. “Politics were very bitter in those days,” he recalled. But the voters re-elected him twice, and handily. “I served faithfully, furnished my own horse and buggy, paid my own postage, and got $500 a year,” he wrote. (His salary was raised to $2,000 after his first term.)

To thank Reutter for the fountain, and to recognize his service to the city, the mayor and City Council named the park in his honor in 1944.

Reutter Park was notorious as a haven for vice in the 1970s, but it got another round of love in 1989, when the Reutter family, the city and the state of Michigan sprang for $90,000 to computerize and modernize the fountain.

Last year, after Cochran stumbled over Schertzing in the park, the Downtown Neighborhood Association went into high gear to bring the park further into the spotlight. “Occupy Wall Street” protesters gave them a head start by camping out in the park from September to December 2011.

A Friends of Reutter Park group was formed last fall. When its Facebook page announced a “chainsaw party” to clear some of the overgrowth hiding the fountain from passing cars, Lansing Parks officials took notice and contacted them. “Since then, the Parks Department has stood on their heads to listen to us, give advice, buy us flowers.” Cochran said.

Along the way, a mighty band of supporters has rallied to raise Reutter Park’s profile, including CADL Head Librarian Kathy Johnston, Deanna Swisher of the Foster, Swift law firm, Sue Eby from the Michigan Department of Community Health and theater man Jeff Croff of Astera Credit Union, a sponsor of the concert series. Tony Beyers of Vesta Building helped with grant writing. Larry Neuhardt and John Esser of Mighty Medicine, one of the performing groups in the series, offered to manage the booking.

On June 19, the park got its first-ever slot in Lansing’s Concert in the Park series, a classic rock/Motown extravaganza with Stan Budzynski. Over 300 people showed up, including Lansing Mayor Virg Bernero.

The Downtown Neighborhood Association has a lot more ideas to get more people into the park, including adding Wi-Fi, chess tables and even a speaker’s podium, to create a miniature version of Hyde Park in London. For some people, that might add incentive to get to the park now, before the harangues begin and swamp gas returns to Third Ward Park.

Delving into the brain, identity and Einstein