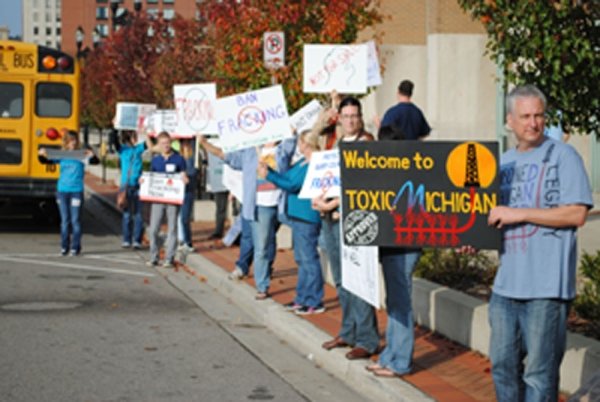 The auction was to sell state-owned oil and gas lease rights to more than 195,000 acres of land in 22 Michigan counties, according to a DNR press release. These types of auctions occur twice a year, in the spring and the fall. A DNR spokesman said that of the six arrested, five face felony charges for obstructing and resisting officers.

The protests centered around fears that private companies would bid on the mineral rights and in turn lease land from the state for oil and gas exploration using a controversial extraction method called hydraulic fracturing, or fracking.

“Proceeds from state-owned mineral lease rights are used to purchase public land for public use; the maintenance and upgrade of state and local parks; and the care and preservation of wildlife habitat," said Mary Uptigrove, manager for the DNR's Minerals Management Section, in the press release. “All Michigan residents have an increased opportunity to use public lands for many recreational pursuits because of the leasing of these rights."

However, roughly 50 protesters at the auction disagreed with Uptigrove that the auction is a positive thing. Most of them were protesting the practice of fracking, a well-drilling technique used to extract natural gas from belowground. Many environmental groups say the practice puts groundwater supplies at risk because of the chemicals used to coax natural gas and oil out of the ground.

Protester Dakoda Benson, 20, said two people made an attempt to disrupt the auction by locking their necks together with U-shaped bike locks in front of the auctioneer. Both of those people and someone who was trying to assist them were arrested and taken to the Lansing City Jail, he said. Benson said he is part of a direct action environmental group called “Deep Water Earth First.”

Benson, along with many of the protesters, were kicked out of the auction area inside the Lansing Center for making too much noise.

“We were told that if we returned, we’d be arrested,” he said.

“Five were charged with felony obstructing and resisting officers and one got a misdemeanor for disrupting a public meeting,” he said. “In addition, 36 people were evicted from the meeting and asked not to return. Other than that there were a number of people who sat quietly and held signs.”

During the auction, land was being leased as cheap as $10 an acre.

After most of the protesters had been kicked out, an elderly woman stood up during a lull in the auction and yelled, “Water is our most precious resource!” The DNR police then forcibly removed her from the auction.

LuAnne Kozma was circulating petitions outside of the auction to get fracking banned in the state. She is the campaign director for the Committee to Ban Fracking in Michigan, as well as the co-founder of Ban Michigan Fracking.

Kozma said Ban Michigan Fracking is engaged in a lawsuit with the Department of Environmental Quality over fracking laws in the state. She said the DNR leases the mineral rights, but the DEQ is responsible for approving drilling permits.

“We can stop fracking cold by banning it,” she said. “Banning it is the only way to mitigate the harm it can cause. Regulations are just rules by which the frackers play. There is no way to make it safe.”

She said the committee plans on getting enough signatures on the petition to place it on the November ballot in 2014.

“This is what the gas industry is afraid of,” she said, referring to the petition. “We’re going to get it on the ballot no matter what.”