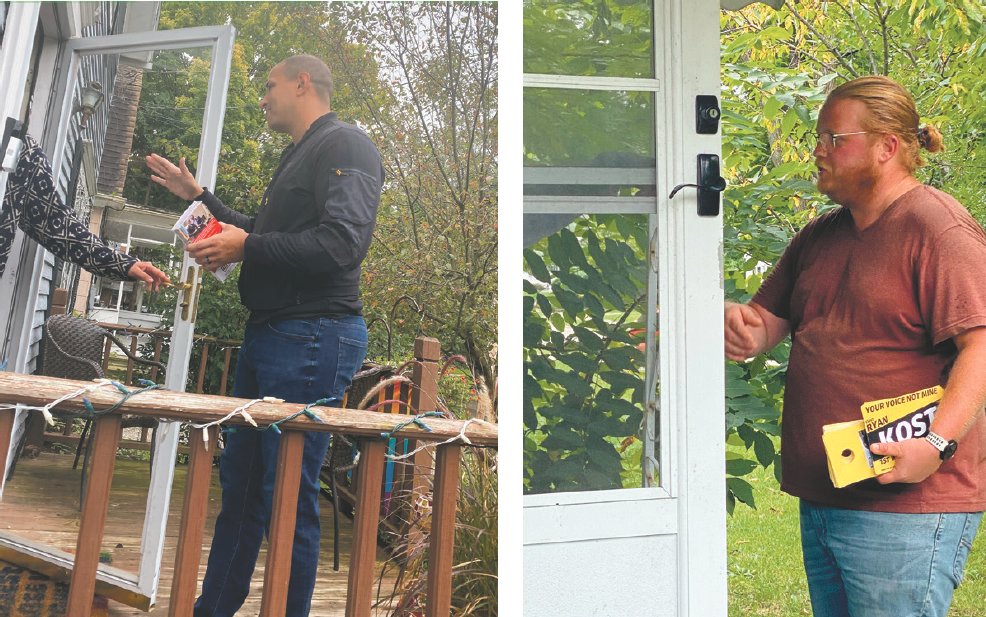 Brian Daniels (left) and Ryan Kost working the doors on Saturday afternoon on Francis Avenue on Lansing’s east side as they compete for a seat on the Lansing City Council.
Posted Thursday, September 29, 2022 12:01 am
By Todd Heywood

Meet Brian Daniels and Ryan Kost, who are running to represent the First Ward on the Lansing City Council on Nov. 8.

Daniels, 36, served in Iraq where he was injured. As part of his journey to heal from his physical and psychic wounds, he found boxing his salve. He grew up in the Lansing area, attended Grand Ledge Public Schools and joined the Army. He returned to Lansing with his family and started a gym featuring boxing as the key activity. He was appointed to the City Council in February to fill a seat left empty when former Councilmember Brandon Betz resigned.

“I want to give him a chance to complete the partial term,” said Lansing Mayor Andy Schor on  his endorsement of Daniels. “I appreciate that he can work with me, but at the end of the day he will do what he thinks is necessary. That’s OK.”

Kost, 34, is a fourth-generation Lansing resident and son of a retired Ingham County sheriff's deputy. He spends his days working for the Michigan Department of Health and Human Services, and his off time as a one-man park improvement team. He’s also on the board of Foster Your Neighborhood, The Eastside Neighborhood Organization and the Friends of Bancroft Park. The Council interviewed him for the empty First Ward seat in February, but he didn’t garner enough votes to move forward in selection.

Leslie Arnell, a resident near Bancroft Park, said she was disappointed by the times she has interacted with Daniels. As a result she’s backing Kost.

“It was a perfect storm for me,” said Arnell, explain that Daniels “just doesn’t represent my voice. Ryan just gets things done, by ignoring and going around the bureaucracy and red tape. I like that.”

Both men are fighting to serve on Council for one year representing an area that roughly spans from Sheridan Road on the north the Grand River on the west to Red Cedar River on the south and the city of East Lansing to the east.

City Pulse editor and publisher Berl Schwartz and this reporter spent an hour in discussion with both men last week. Here’s a truncated version of the conversation.

Do you support the Lansing Board of Water & Light proposed rate increase in electricity and water? And would you support renegotiating rates for larger employers like GM?

Kost: Just like other residents, I’m upset about it. I’ve seen some numbers that they have published and the reasons why. I would not favor raising this. I’m not anti-business, but at some point we have to stop putting all the water that we carry on the backs of my neighbors and Brian’s neighbors and your guys’ neighbors. It is too heavy a burden to carry

Daniels: I obviously don't support the increases. I think that the people of Lansing are already having to make tough decisions every day, and adding these increased utility bills isn't necessarily going to make life easier. I think that we should be negotiating with the bigger organizations in the city to give the city more money and to help support these finances so that it doesn't come down to us. I think that the Board of Water & Light does offer, compared to other utilities in the area, lower rates, but that doesn't mean that they should automatically get to jump like a large rate jump.

What is your perspective on Mayor Andy Schor’s $175 million bond proposal for public safety?

Kost: I am against it a hundred percent. There's many reasons why. One of them is this whole campaign. I have told people, it's your voice, not mine. And people have very strongly said they do not want to build this, not because they don't want more police officers or our firefighters to have the proper equipment. They can't afford another tax increase on their property taxes.

Daniels: I actually do support this because I think that it's necessary, not only from the presentations that we've seen, the ride-alongs that I've gone on and speaking with the officers, but understanding that while violent crime might be down this year, we've seen steady rising crime. We know that our department was gutted after the recession. We know that our firefighters need better gear and off-gassing opportunities to prevent cancer. So we have to do something about it. And so this, I think, is that opportunity.

Would you have supported Lansing becoming a sanctuary city for undocumented immigrants, even if your constituents disagreed with you?

Kost: I would've voted no on it because there were federal dollars that we would've lost here in the city, money in our budget that hurts citizens, literally will hurt citizens. That would be a major, major hole in our budget. So yes. Am I a robot that says that every vote will get every voice? No. There are issues where I do have to stand up.

Daniels: To pretend that immigrants still aren't under attack, ask Martha's Vineyard. The reality is that nationwide, this is still very much an issue. Losing federal dollars because of becoming a sanctuary city is obviously a risk. I personally won't sell out my moral belief that protecting immigrants is and should be a top priority. Being a sanctuary city and having an idea of how to handle illegal immigration is a whole other topic, but I would support sanctuary city, personally, I understand the uproar. I understand that it's not easy, and I understand that it's a complicated decision. But I personally would not be able to sleep at night if I pretended that America isn't capable and that we, as a community, aren't capable of figuring out how to take care of people.

Listen to the full conversation on lansingcitypulse.com.