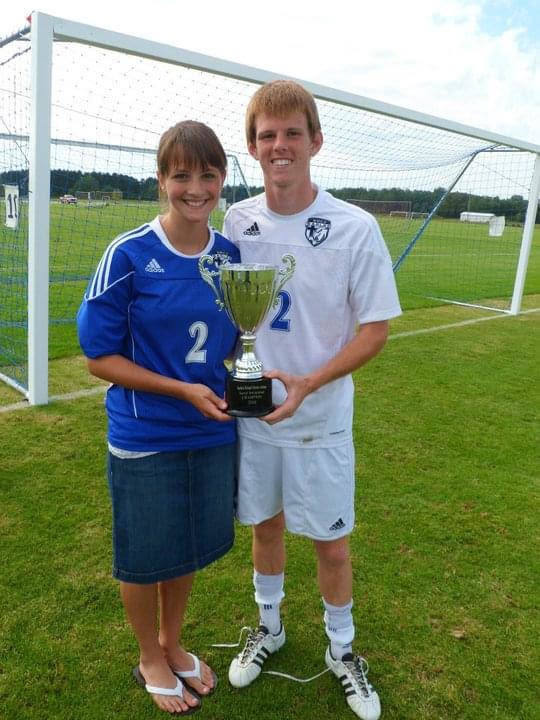 Rebekah Leonard with her then high school boyfriend Aaron Chatfield after a soccer tournament. They married when both were 19.
Posted Thursday, February 10, 2022 12:00 am
Todd Heywood

Rebekah Chatfield remembers the first time Lee Chatfield allegedly abused her like it was yesterday — long before Lee became a state lawmaker, several years before she married his brother.

Now 26, Rebekah Chatfield told City Pulse that the alleged abuse began when she was a 15-year-old student of Lee Chatfield’s at Northern Michigan Christian Academy. She was babysitting for Lee and his wife, Stephanie – something she had done previously for her teacher. Lee Chatfield also doubled as a coach and athletic director at the rural Up North school on Burt Lake near Alanson.

“So, the very first time: I was at his house babysitting. They had a three-level home, and so I was watching TV and he came down and acted like he just wanted to watch TV with me,” she said. “Then he shut it off. I was going to go upstairs while he goes up and sits at the top of the stairs. And that's when my first encounter was and he was basically not going to let me up through the stairs.” Chatfield fondled her body, with “inappropriate touching everywhere,” Rebekah Chatfield alleged.

She was stunned and froze when the touching began. After a few minutes, Chatfield stood up and opened the door — offering an escape, she recalled. The next day at school was grueling.

“I remember just looking at him and the way he just stood there, and I could tell he was in a deep, deep process. Just staring at me. I don't know what he was thinking but I could tell it was something deep and big,” Chatfield said, noting that Lee Chatfield was teaching in a nearby classroom.

Through Lansing attorney Mary Chartier, Lee Chatfield acknowledged a “consensual affair” with Rebekah Chatfield and others, but he denied any sexual contact with his sister-in-law before she was at least 18.

The school she attended — where Chatfield was teaching — was small and insular, Rebekah Chatfield said in an interview. Her graduating class was only 13 people and she recalled no enrollment over 100 students in the K-12 program.

Despite the marriage, Rebekah Chatfield said Lee Chatfield had continued engaging in sexual activity with her for years — including last year, throughout his time in the legislature and as the House speaker.

“Lee would control Aaron's schedule,” she said. “He controlled our finances. He knew when Aaron would be home; when he wouldn't be.”

She alleged that Lee Chatfield would use computer programs (like SnapChat and WhatsApp) to delete conversations after they occur, leaving no way for the infidelity to be tracked electronically. She said it was via those computer apps she would be told when Lee Chatfield was coming over for sex.

“I verbally said no. I verbally said I cannot do this anymore,” she said she told Lee Chatfield more than once. “He would do whatever he had to do. However long he needed to step away, he would always come back. So it would be harassment through text messages or SnapChat.”

The persistent sexual activity, despite her attempts to rebuff her brother in law’s advances, led to severe depression, “even suicidal thoughts,’ she told City Pulse.

She worried that coming forward with her allegations could “ruin the family,” Rebekah Chatfield said.