Everything out of its place: Broad Museum exhibit is a closet full of chaos 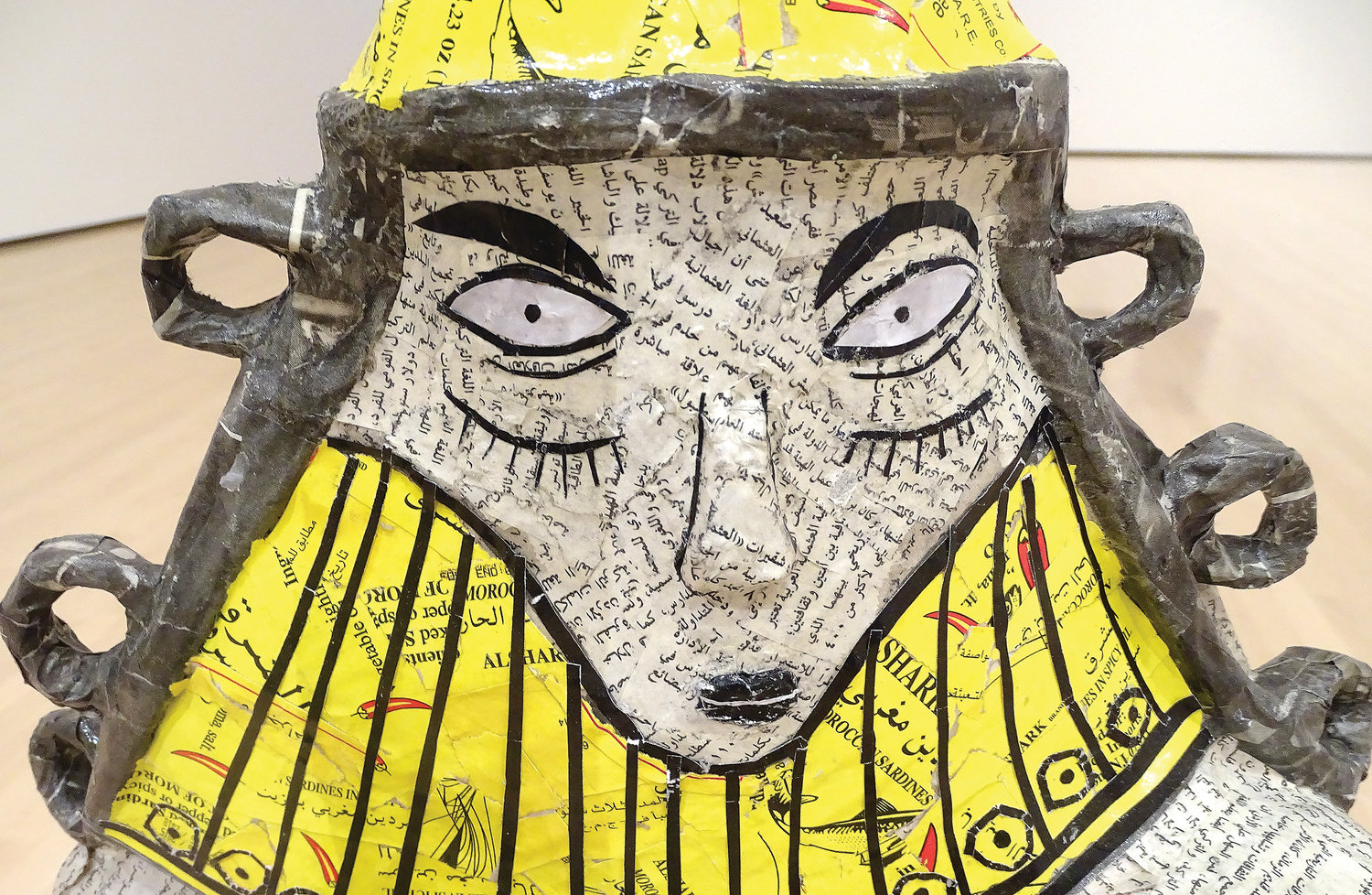 Iraqi-American artist Michael Rakowitz used newspapers and sardine cans to re-create a 2,000-year-old artifact plundered from the National Museum of Baghdad in the wake of the 2003 U.S. invasion.
Lawrence Cosentino 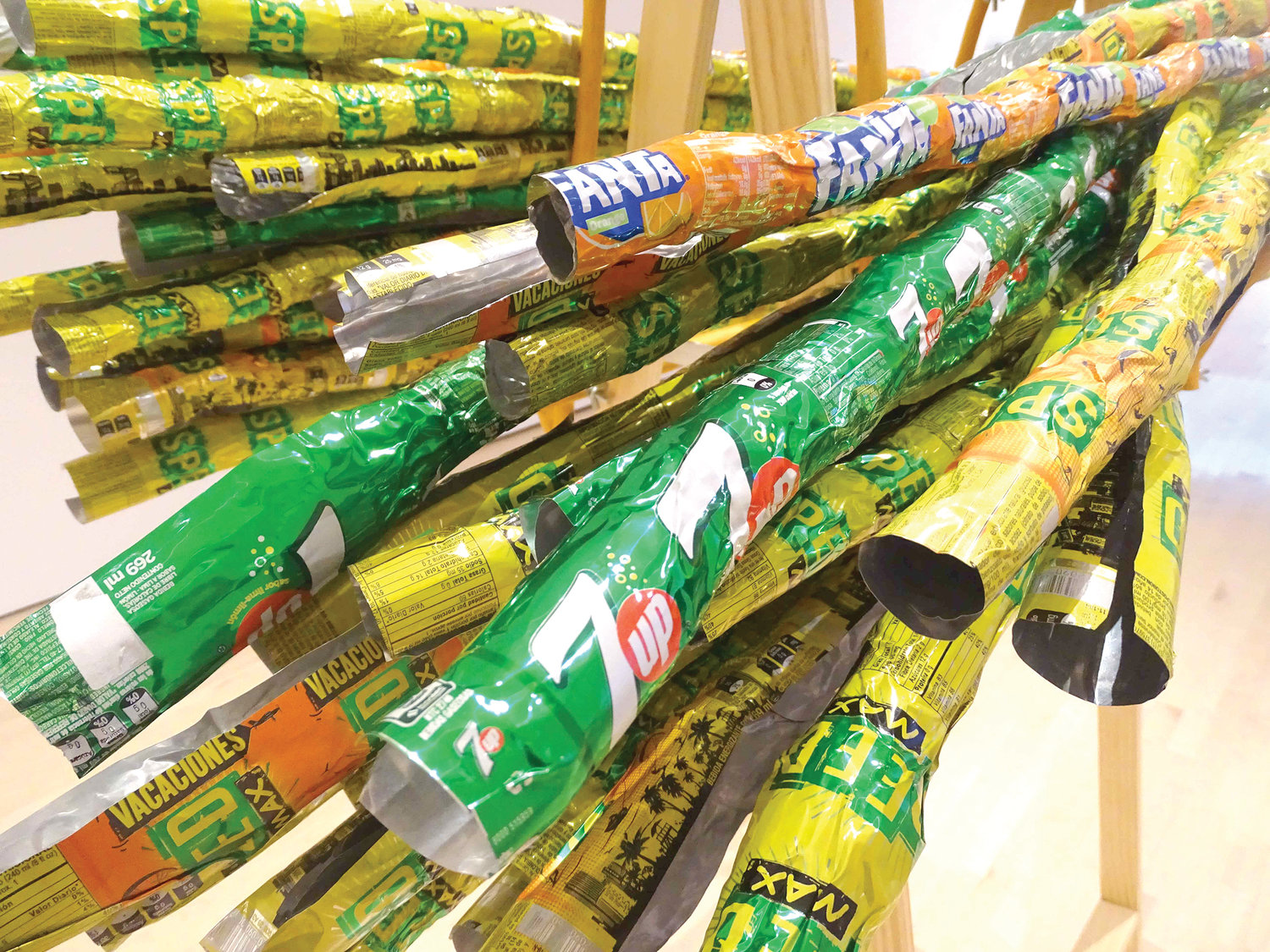 Colombian artist Reyes Santiago Rojas riffs on the destructive cycle of sugar cane plantations that ruined the landscape in large swaths of Latin America and came back in the form of soda and other junk food.
Lawrence Cosentino
Posted Thursday, February 20, 2020 2:29 pm
Lawrence Cosentino

What is that bird doing here?

The odd sight of a burrowing parakeet from Michigan State University’s ornithology research collection, stuffed and encased in glass among dozens of pieces of contemporary art, provokes one of a thousand uncomfortable questions at the Broad Museum’s big new exhibit.

On trial is the very act of taking something out of its context and putting it on exhibit.

A case full of colorful, ancient-looking shards and fragments catches the eye. Has the Broad started collecting Egyptian ruins?

You must be kidding. On closer look, the viewer learns that the “Egyptian artifacts” were dug up from the Nipomo Dunes in Guadalupe, and were made for movie director Cecil B. DeMille’s 1923 version of “The Ten Commandments.” The owl in the middle of one case sat in a Napa Auto Parts store for many years.

Clues to the true age of the objects are provided by zigzag design elements more suited to Art Deco than Pharaoh Rameses II, and by a trio of cough syrup bottles, probably guzzled by bored extras in lieu of real booze during Prohibition.

This is one exhibit where you don’t want to skip reading the labels. They really live up to the promise of “rogue stories.” We learn that the plaster in the artifacts is bound with hair, still visible, that was shaved from horses DeMille rented from the nearby Presidio army base in San Francisco. We also learn that the Guadalupe boy who wandered into the dunes and found the plaster owl was flogged by his father with a Hot Wheels track for missing work.

There’s a bizarre sequel to the story, involving spiritualists who thought the existence of Egyptian artifacts in the California dunes meant aliens had visited the area.

The glass cases are set in a phony Egyptian room graced by large, kitschy murals discarded by the Luxor Hotel and Casino in Las Vegas.

There is a method to all of this madness. The Broad exhibit is the first stop in a traveling project put together by a young wave of museum curators, Independent Curators International.

“Never Spoken Again” candidly exposes the complicity of museums in exploiting and distorting non-Western cultures, but for these young curators, that is just a starting point. The exhibit is more than a hall of shame — its playful side, and its delight in a labyrinth of side paths and open doors, hints at a new wave of freedom in museum practice.

The heart of the exhibit is a wall of sobering photographs taken in the 1980s at a museum built by Catholic missionaries.

Brazilian artist Maria Thereza Alves captured insensitive and depressing exhibits of native artifacts, including a plaster native trapped like a parakeet in a glass booth.

“What am I doing here?” he seems to be asking.

Between the photos, a series of panels recreate the eloquent testimony of Alvaro Fernando Sanpaio of the Turkana people, detailing the decline suffered by the native inhabitants of the Rio Negro after the arrival of Salesian Catholic missionaries in 1915.

Sanpaio describes in detail how evangelism and programs for education and national integration broke up native communities and stripped the natives of their myths and practices.

Among the sad results were poverty, addiction and prostitution.

“This would shock the nuns, as they are very sensitive when one speaks truths,” Sanpaio dryly notes.

A shadowy video looping at the west end of the exhibit hints that native gods and spirits all over the world may someday wreak their revenge.

Iranian artist Mohreshin Allayaru’s black and white video evokes Huma, a mid-level spirit from traditional Arabic and Muslim stories who thrives on flaming chaos that is completely antithetical to the sterile order of a museum.

“She is a monster and should be,” goes the narration.

The video gives you the feeling that if Huma ever got in the mood, she could burn the whole place to the ground.

Until then, the parakeet from MSU will stay in its case, peering at the visitor with its piercing, false eyes, as if to ask, “what am I doing here?”