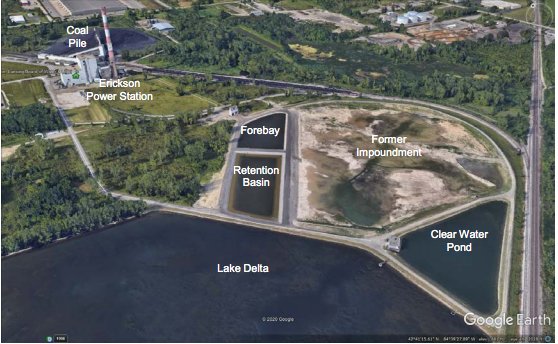 This aerial photo from a 2020 report by the Lansing Board of Water and Light shows four coal ash ponds near the Erickson Power Station, off Canal Road in Eaton County. The ponds are identified in the image as Clear Water Pond, Former Impoundment (which has been decommissioned), Forebay and Retention Basin.
Posted Tuesday, January 18, 2022 7:20 pm
TOM PERKINS

(This story has been updated to correct the last name of Elena Saxonhouse, managing attorney of the Sierra Club. Because of a reporting error, her last name was misspelled.)

Dangerous toxins leaching from coal ash ponds around Lansing’s Erickson Power Station are contaminating groundwater and for decades may have poisoned nearby drinking water supplies that feed private residences’ wells and the municipal system.

The Lansing Board of Water and Light, the publicly owned utility that operates the coal plant, detected high levels of lithium, boron, TDS and molybdenum leaching from the three ponds in 2020, documents submitted to the U.S. Environmental Protection Agency by the utility show. Though it’s unclear when the leaks started, the plant, which is  off Canal Road inEaton County, has operated the ponds since 1974.

The documents, part of a BWL request to delay the ash ponds’ closure, also show the utility violated federal rules by failing to monitor groundwater near the ponds for around three years. As a result, the EPA preliminarily denied BWL’s request, and that could force the agency to at least temporarily shutter Erickson later this year.

BWL plans to remove ash from the ponds, but Lisa Evans, an attorney with environmental watchdog Earthjustice, said the utility needs to take far more action than it has proposed if it’s to eradicate the problem, including testing drinking water.

“The cleanup plan is inadequate,” Evans said. “They also have a moral obligation to test those wells to make sure nobody is drinking contaminated water, which is a logical, reasonable and an easy step that needs to be done immediately.”

The utility is overseen by a board of mayoral and Council appointees, and the utility’s administration appears to have kept quiet on the contamination problems. Board Chairman David Price said Saturday that BWL’s administration hadn’t informed the board of the violations. He also said he was told on Friday that the ponds weren’t contaminating groundwater, which is contradicted by BWL and EPA documents.

“The board has not had a chance to meet on this yet,” Price said.

The administration didn’t alert the board because it hasn’t been fined for its violations, Adamy said.

A spokesperson for the Michigan Department of Environment Great Lakes and Energy “is coordinating with EPA to address violations of state statutes and rules at Erickson and to bring the facility into compliance with environmental rules and statutes.”

That includes requiring BWL to test drinking water supplies. Among the violations are a failure to prevent groundwater contamination, to obtain proper licenses, to keep a proper distance between the ponds and groundwater, and to install proper pond liners.

High levels of lithium are linked to thyroid disease, boron may cause testicular shrinkage, and molybdenum is linked to gout and reproductive toxicity in animals.

Four private wells are about a half mile down gradient from the ponds, and dozens  more, as well as two municipal wells, are within a mile. It’s unknown how large the pollution plume is, and no testing has been conducted off site, Evans said.

Coal ash, a byproduct of burning coal to generate electricity, typically contains high concentrations of heavy metals like arsenic, cadmium, mercury, and other toxins that when added to water creates what Evans characterized as a ‘’toxic soup.” Utilities for decades disposed of coal ash in unlined ponds, and an analysis by Earthjustice and the Environmental Integrity Project, a D.C-based nonprofit, found 92% of the nation’s 700 ponds have contaminated groundwater above federal standards.

The Obama administration in 2015 enacted new ash pond regulations, but the Trump administration largely didn’t enforce the rules, and coal plants have mostly policed themselves. The EPA last week announced it is beginning enforcement, and the preliminary decision on BWL’s request is among the first actions. The issue is “urgent,” said Elena Saxonhouse, managing attorney with the Sierra Club.

“What this set of decisions from the EPA signals is that they are going to be more strongly enforcing coal ash rules and looking at these impoundments around the country to make sure they are in compliance,” she said.

In a statement to City Pulse, BWL said it had completed what it characterized as a “certified” testing.

However, the EPA and Earthjustice deemed the monitoring inadequate. Earthjustice’s analysis found that BWL dug too few wells and those were placed too far from the waste ponds to give a clear picture of the pollution plume’s size and location, and the EPA noted that the utility didn’t test between 2017 and late 2020.

Meanwhile, EGLE found that the ponds are only one foot from groundwater, when state law requires at least five.

“From the get go, that monitoring well system was noncompliant and inadequate,” Evans said.

BWL noted that it had also developed models and plans to “remove the [ash ponds] and reduce the concentration of lithium and molybdenum in the ground water,” and said it would continue to work with state and federal regulators.

Evans said BWL’s model is incomplete, there doesn’t appear to be a plan to implement it, and removing ash from ponds doesn’t clean groundwater.

“There’s no indication that the facility is close to choosing a remedy, and they are relying on modeling that they haven’t developed yet,” Evans said. “This is not how this issue should be approached.”

She added that it’s possible that the drinking water wells are deep enough that they aren’t contaminated, but there’s no way to tell without testing.

EGLE is also requiring BWL to determine if contamination reached the deep bedrock aquifer from which wells draw, install more monitoring wells, investigate the plume’s size and migration, and ultimately close the wells.

It’s unclear why BWL didn’t alert the board or the public, and BWL General Manager Dick Peffley did not comment. BWL spokeswoman Amy Adamy said the groundwater reports are posted on the utility’s website. However, it appears that the administration never told the board that the reports were there, that the ponds were contaminating groundwater, or that it had violated state and federal laws. Since it didn’t post reports for 2017 or 2018, it would have been impossible for anyone looking at the website who didn’t have previous knowledge of the violations to know that reports were missing.

The BWL was initially ordered to stop sending coal ash to the ponds by April 11, 2021, but it had requested the extension. The EPA wrote in its preliminary determination that it rejected the request because of the failure to monitor contamination, and it gave the utility 135 days from the finalization of its ruling to cease using the ponds. That could effectively force the BWL to shut down Erickson because it has nowhere else to put its ash, though the utility could send it to another landfill or update its facilities.

But Saxonhouse noted that the coal plant is slated to close in 2025, so BWL will have to determine whether it makes financial sense to spend on upgrades or alternatives to disposing of ash for another three years.

The EPA wrote that closing Erickson likely wouldn’t disrupt service because the Midwest regional grid has enough excess power that it could easily meet Lansing’s needs. However, if it’s determined that a disruption is possible, the EPA may grant BWL an exemption.

BWL said in its statement that it is “evaluating the EPA’s determination and expects to submit comments to the EPA during the formal comment period.”

Evans called on the utility to act quickly on remediating the water.