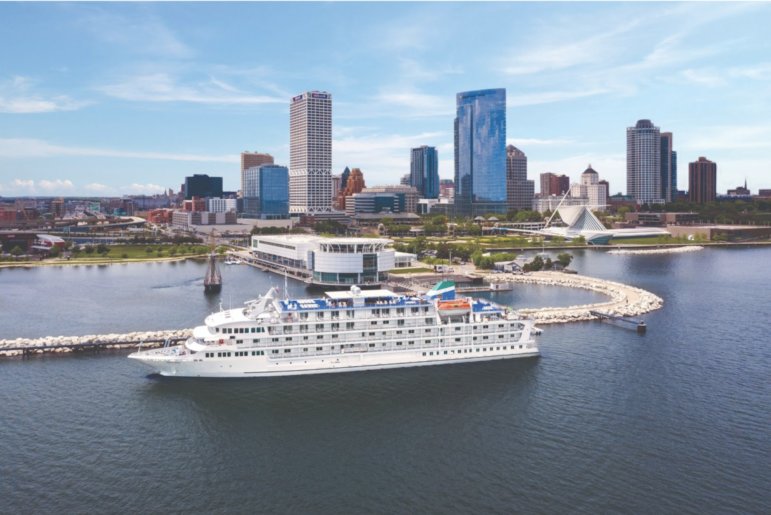 The Pearl Mist is pictured docked at Port Milwaukee. The Great Lakes cruise season will begin in May and end in October.
Courtesy photo: Pearl Sea Cruises
Posted Saturday, April 9, 2022 12:00 am
JACK FALINSKI

LANSING — After a two-year hiatus, Great Lakes cruise ships are back, and the industry is trying to prepare itself.

That’s good economic news for ports and nearby communities that attract tourists getting off the ships.

The Great Lakes cruise ship industry paused for two years after the pandemic began in spring 2020.

Since then, would-be passengers have been docked at home, booking spots on future cruises and waiting for the chance to sail once again on the big, blue, beautiful bodies of water surrounding Michigan.

“People have been booking all through COVID-19,” Lorenz said. “There’s a big list of people waiting to get on these ships, and we’re thrilled to see them back.”

Lorenz said ships on the Great Lakes are smaller than cruise ships elsewhere, holding between 200-400 passengers.

Cruise companies will start expeditions in May and end them in October, he said.

Depending on the trip and type of room that’s booked, trip prices can range from about $5,000 to almost $20,000 per person, according to prices posted by the Great Lakes Cruise Co.

When ships start to arrive, they are required to visit both U.S. and Canadian ports because of a partnership between the two countries.

Outside the state, Lorenz said ships will stop at Cleveland, Milwaukee, Duluth and Windsor, Ontario.

Bob Lukens, the community development director for Muskegon County, said he’s excited for cruise ships to return because of the economic impact they have.

Attractions for passengers include Muskegon’s three downtown museums, according to Lukens.

He also said ships’ kitchen staff like to shop locally when they can.

“Every time they come to port here they like to stock up,” Lukens said. “They will go to some of our local stores to purchase food, vegetables, fruits and beverages. On occasion, some of the chefs have gone to our farmers’ market when the market is open and the ship is in port.”

In 2015, Lukens said, Muskegon accepted its first cruise ship. And before the pandemic hit in 2020, Muskegon was scheduled to welcome 35 ship calls to its port.

This year, the port is currently scheduled to receive 17 calls, according to Lukens.

“I think it kind of demonstrates that we are coming out of the pandemic to a certain extent,” Lukens said.

Lorenz said ports like Muskegon also draw visitors to neighboring cities. Those who come to Muskegon, he said, can bus to places like Grand Rapids or Holland.

Organizations from Michigan that took the pledge include the Detroit, Muskegon and Holland convention and visitors bureaus, the Detroit Port Authority and the Muskegon Lakeshore Chamber of Commerce.

The pledge is centered around destination stewardship to limit the shoreside impact of travelers, reduce air and carbon emissions, discharge wastewater legally into treatment facilities and promote sustainability.

Lorenz said the commitment will keep Michigan’s cruise industry competitive, noting that many passengers are concerned about such issues.

“We want to make sure that we’re leaving no trace as much as possible,” Lorenz said. “It’s a leave no trace message: take only pictures, leave only footprints.”

In Muskegon, Lukens said one aspect that makes the port valuable is that it can accept wastewater from ships and transfer it to the county’s wastewater treatment facility.

“The ships appreciate being able to come into port and offload that wastewater in Muskegon,” Lukens said.

Lorenz said an advantage that some of the small new ships possess over larger ones is the ability to power down at ports and electrically charge their engines, reducing their carbon emissions.

Christopher Moyer, the senior director of communications for Visit Detroit, said ships can anchor at Detroit’s port and use the city’s electric system to charge.

“The Great Lakes and the rivers and waterways that connect to them are the crown jewel of Michigan’s exceptional natural beauty,” Moyer said. “They are a vibrant ecosystem that must be protected as people use them for leisure and recreational activities.”