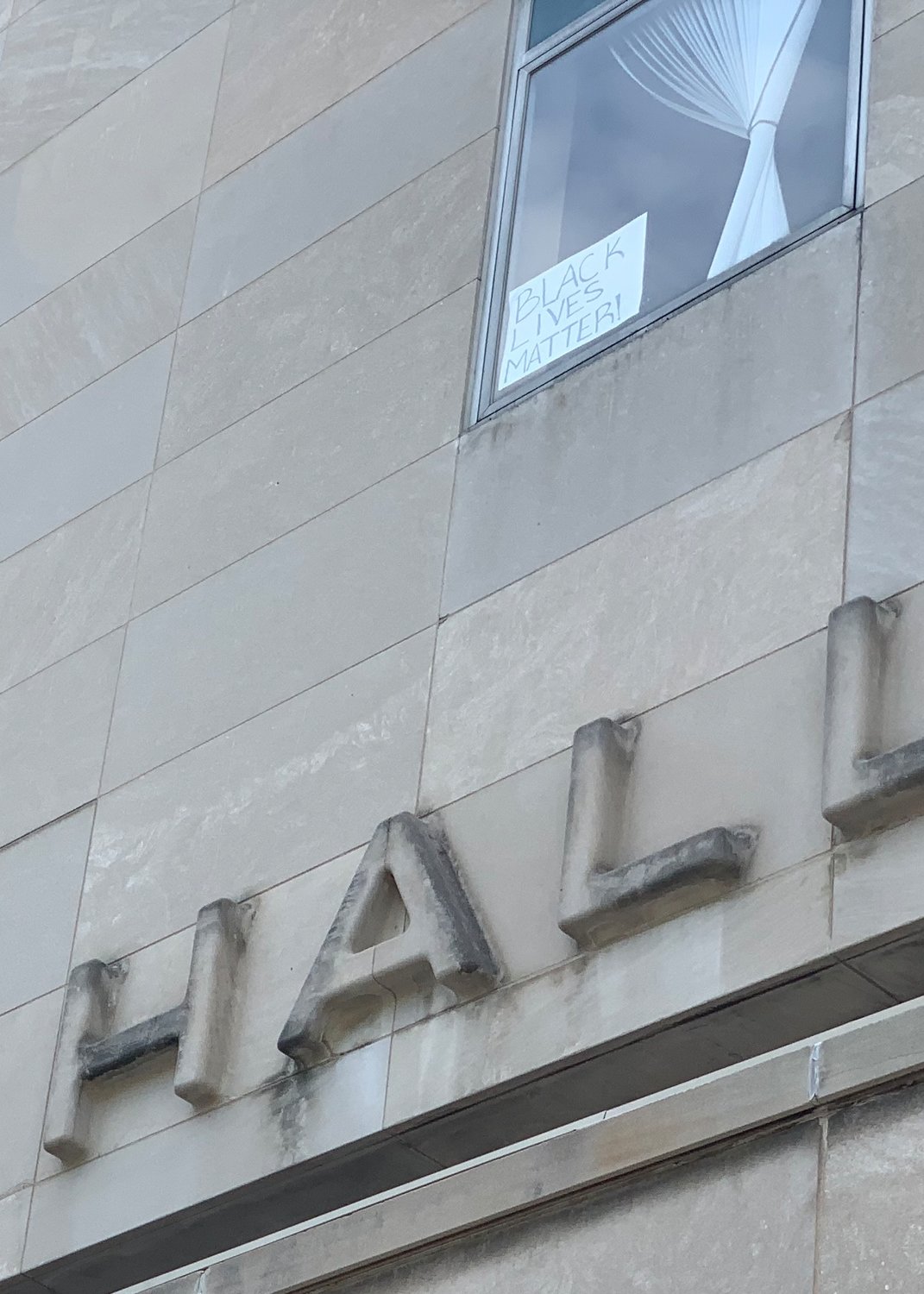 TUESDAY, July 7 — The city of Lansing would redirect half the police budget into social equity programs under a plan unveiled today by Lansing City Councilman Brandon Betz.

Betz’ proposal, which he designed in cooperation with the local chapter of Black Lives Matter and other Council members, would cut at least 20% from the Lansing Police Department next year with plans to halve the departmental budget — a $23 million cut — over the next five years.

“Black and brown communities and the working class have been victimized by police violence for years and Lansing has its own history of racist violence and discrimination on behalf of the police,” Betz said from a “Liberate Lansing” podium set up in front of City Hall.

“This is not a time for half-measures or small reforms,” Betz told reporters. “We have to stand for justice and fundamentally change the way we think about public safety.”

Betz, who has also participated in multiple protests in the wake of George Floyd’s murder, announced the plan in tandem with Angela Waters Austin, cofounder of the Lansing chapter of Black Lives Matter, and activists Michael Lynn Jr. and Tashmica Torok.

He called the proposal the “first step” in stopping discriminatory police brutality in Lansing.

The resolution — which still needs a formal introduction at City Council before it can move toward a vote — would create an ad-hoc committee on “Public Safety Transformation,” which would focus on reallocating the LPD budget to other, unnamed programs and city services.

And with a budget of about $46.5 million this year, more than $23 million could be up for grabs.

“In Lansing, we began researching the data on police contact with young, black folks in particular several years ago. It may seem like this defund campaign came out of nowhere, but it came from years of understanding and studying where the barriers in our system were, and how our young black people were being targeted in this community,” Waters Austin said.

In nearly 28,000 traffic stops in Lansing over the last three years, about 33% of drivers were Black, statistics showed. They were also about three times more likely to be searched or arrested compared to white drivers in the capital city. Betz said his proposal will reduce discrimination while stopping short of a total abolition of the Police Department in Lansing.

Betz said he was aiming for a total police divestment, but the 50% mark was much more “politically feasible” and allows for the city to continue funding about $10 million in pensions. Still, he recognizes it will put local cops out of a job. And that’s the best path forward, he said.

The committee would also be designed to issue recommendations on how to administer public safety with the reduced funding levels by assembling a “New Priorities Report” by February. The goal: systemic transformation, compassion, liberation for marginalized people and racial equity.

“The committee will be tasked with the responsibility of finding ways to reduce the police budget and reinvest those funds into other city programs through a process that centers community input and those adversely affected by over-policing,” according to Betz’ resolution.

The subsequent budgeting process, the resolution says, will be conducted with “broad and deep participation” from the Black communy and all others negatively impacted by police “without undue influence” from Mayor Andy Schor, who has repeatedly been asked to resign by Black leaders across Lansing.

Betz entertained a discussion about Schor’s resignation, but he stopped short of demanding it.

“If the Black community is calling for it, then it’s something we should talk about,” Betz said when asked whether he’s also demanding Schor’s immediate resignation. “I need to work with the mayor who is currently in office, and it would be detrimental for me, particularly, to start calling on him to resign. I think Andy Schor needs to get his act together.”

Police officers nationwide, including in Lansing, have been expected to fill the void left by shrinking mental health services. Studies show that up to 20% of police encounters involve mental health issues or alcoholism. An astonishing one in four people with mental illness has been arrested. Reformers have called for “unbundling” these services from law enforcement.

Records show that about 80% of LPD’s annual budget heads directly to payroll and benefits. Betz’ resolution would invariably remove local officers from city streets, if it comes to fruition. City officials and other Council members have, at least so far, have been hesitant to make cuts.

“The process must commit to uprooting the false belief in racial hierarchy and investing in community health services, youth programs, transformative justice, and other programs to repair the decades of harm caused by racism in our community and reduce dependence on police,” according to the resolution, which could be introduced to Council as early as Monday night.

In the remaining police budget, the task force would be tasked with examining policies on police de-escalation, racial biases and a zero-tolerance approach to racism within the department. The results of that review would be compiled in a “Public Safety Transformation Report” by February.

Citing that Lansing is 20% African American, the local Black Lives Matter chapter demanded last month that a similar percentage of the LPD budget — about $9.6 million— be redirected to the needs of the Black community. Betz’ proposal would more than double that divestment.

“We need a new approach to building our beloved communities of color. The Black community has long given up the notion that police are there to protect and serve,” added the Rev. Sean Holland. “We have everything we need in our own community to serve our community.”

Although no action on the budget has been taken, Schor has already rolled out a series of proposals on “Racial Justice and Equity Community Action” that includes the hiring of a diversity officer and plans for the city’s first diversity, equity and inclusion plan.

Betz said the results and recommendations that eventually come from the proposed ad-hoc committee would still almost entirely rely on Schor’s office to weave them into a working budget proposal for the next fiscal year. Council can only amend existing mayoral budget plans.

Spadafore said he “appreciates the effort” from Betz, but he also maintained that the City Council already has appropriations and public safety committees that handle this work.

“I’m not a fan of prescribing costs this early on, but I’m willing to talk about these ideas,” Spadafore said, noting that Betz didn’t consult him — and perhaps other Council members — in crafting the recent police divestment proposal. Spadafore only found out about it yesterday.

Betz said this particular change must be addressed outside the existing Council structure. He also suggested that at least five other council members — a supermajority — support the plan.

“This is going to take more research and thought than what can be held in just one committee,” Betz explained. “I really think we need a separate one to specifically focus on these issues.”