A stew fit for two misfits 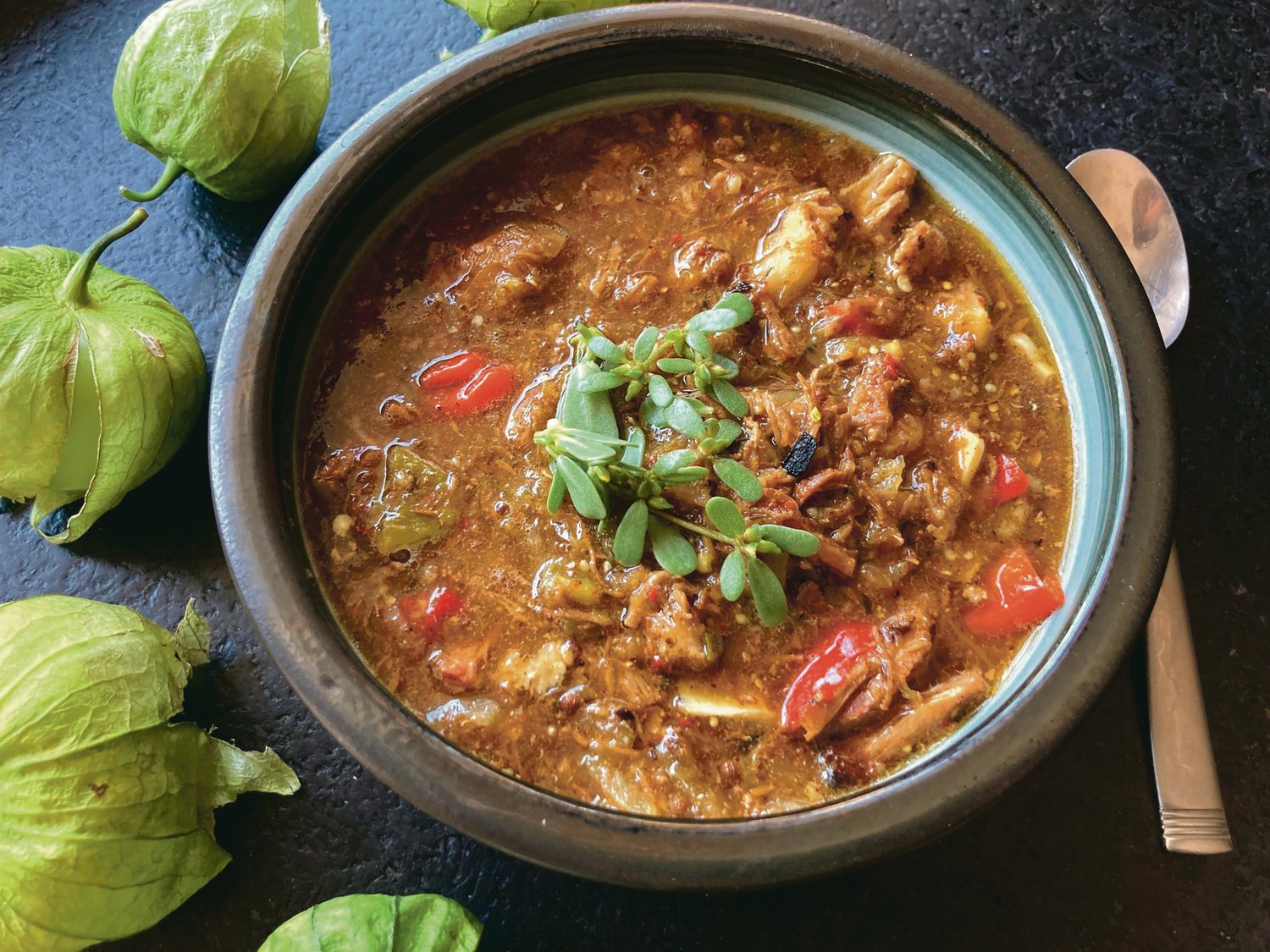 2 lbs pork Something tough and marbled like stew meat, shoulder (aka butt), country-style ribs (which are cut near the shoulder-end of the rib cage) or even uncured belly if it’s not too fatty)

1 cup lager beer, such as Pacifico

Pity the misfit tomatillo, aka the Mexican husk tomato. Most cooks don’t know what to do with that swaddled orb that looks like a paper lantern and tastes like some underripe fruit. Green salsa is the most common application, but I often prefer tomato salsa because tomatillos can be a bit slimy.

So where does that leave the poor tomatillo? Our one good idea, salsa, is second string to everyone’s favorite tomato salsa. Our misunderstood, underappreciated hero is like the last kid picked to play kickball. Luckily, tomatillos can stay fresh for a long time because they might languish in the fridge.

My go-to use for tomatillos is pork chile verde, where pork is simmered in a tomatillo sauce with chile peppers and spices. I like to make it with various peppers of various colors and heats, creating a seamless complexity that’s hard to quit. Once, we dropped a finished batch on the floor. The five-second rule was temporarily suspended as I scooped it up and back into the pot.

I recently found myself contemplating another misfit of an ingredient: purslane, a succulent plant often considered a weed. I find myself wanting to crave purslane more than I do. This nutrient powerhouse contains antioxidants and minerals and is the plant with the highest recorded levels of omega-3 fatty acids.  Purslane is easy to forage, as the tender stalks give up without a fight, making purslane a most eligible ingredient on paper. But in practice, not so much. The flavor isn’t bad. It’s salty, crunchy and plump with tart juice — none of which are terrible characteristics. The problem is that purslane, like tomatillos, is slimy.

I speculated that chile verde might be a great context to enjoy purslane, as the sliminess would be absorbed, dispersed and covered up by the textures and flavors of this fragrant stew. I figured its earthy, slightly bitter taste might offset the sweetness of the stew. Indeed, the purslane improved the verde, which can otherwise border on too sweet if you aren’t careful.

To be clear, to cook this dish, you don’t need to go hunting through some vacant lot for purslane. With or without the world’s healthiest weed, chile verde is definitely the thing to make with tomatillos. Its tartness penetrates the meat, tendering and imbuing it with flavor. If you aren’t a pork eater, you can substitute pinto beans to balance the sour, spicy sweetness of chile verde.

My recipe includes apples because everyone knows they go with pork, creating a redundant complexity with the tomatillos.

This stew is hands down the best thing to make with tomatillos. It’s a meaty whirl of aromas and flavors, with enough sour sweetness to balance the pork and enough heat and bitterness to counter the sweetness.

Cut the pork into inch-cubes (if using ribs, cut the meat off but include the bones to flavor the stew). Heat the oil in an oven-safe dish with a tight-fitting lid, and then add the pork. Cook on the stovetop, over medium heat, until brown and tender. Add olive oil if the pork isn’t fatty enough.

When the pork is cooked, add the spices and onions, and stir it together. When the onions become transparent, add the tomatillos, apples, garlic, peppers and two cups of water. Add the beer and cook on low with the lid for one hour.

Alternatively, for a smoother sauce, blend the tomatillos, apple, garlic and peppers until smooth, and add that. You can also mix half of these ingredients and leave the other half chunky.

Season with salt and pepper and possibly more cumin. When the flavor is right, spoon it into bowls with rice, beans and tortilla chips if you want to be all proper, and garnish with purslane.

Take some rice on the wild side

Capital City BBQ is fighting for its future